A new image by NASA reveals the extent of the world’s marine dead zones, which a study in 2008 found were doubling every decade. At that time 415 dead zones had been identified worldwide. Dead zones are regions of the ocean where dissolved oxygen has fallen to such low levels that most marine species can no longer survive. Such conditions are often seasonal.

The so-called dead zones are caused by agricultural runoff, especially nitrogen-rich fertilizers, as well as the burning of fossil fuels. Pollutants from these sources cause marine eutrophication, whereby the ecosystem receives too many nutrients, triggering massive algae blooms, which eventually die and are broken down bacteria. In breaking down the algae blooms, the bacteria consume excessive amounts of oxygen, essentially starving the marine system. Therefore the largest and most extreme dead zones occur near high populations and run-off areas for agriculture fertilizers.

There are a few places in the world where low-oxygen waters are naturally occurring, such as the Bay of Bengal and southern Africa’s Atlantic west coast. Species in these regions have evolved greater resilience to low oxygen conditions, however even these areas are threatened by anthropogenic sources of nutrients. 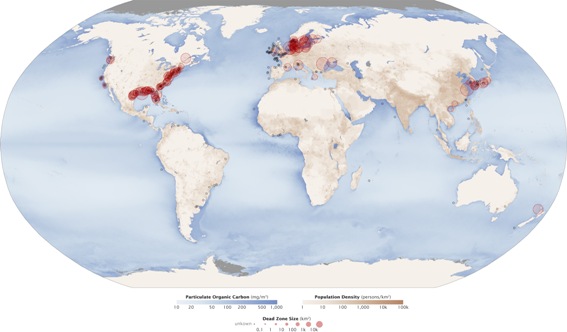 Created by satellite, the red circles on this map show the location and size of many of our planet’s dead zones. Black dots show where dead zones have been observed, but their size is unknown. Darker blues in this image show higher concentrations of particulate organic matter, an indication of the overly fertile waters that can culminate in dead zones. Image courtesy of NASA. Click on image to enlarge.

(12/15/2008) Ocean acidification — driven by rising carbon dioxide levels in the atmosphere — may hurt the Humboldt squid, report researchers writing in the journal Proceedings of the National Academy of Sciences.

(08/14/2008) Dead zones have spread across the ocean at alarming rates. Currently 415 sites, usually along coastlines, have shown signs of seasonal to persistent hypoxia—a severe lack of oxygen. In a new essay in Science, researchers Robert Diaz and Rutger Rosenberg argue that marine dead zones have “become a major worldwide environmental problem”. Marine dead zones now occupy a portion of the ocean equal to that of the United Kingdom and continue to grow, doubling every decade since the 1960s and showing no sign of abating.