To whale or not to whale?: nations, environmental groups do some soul-searching

There are two ways forward on whaling according to visions being put forward at the International Whaling Commission this week. One way is to uphold the 24-year-long ban on hunting and killing whales. While this road sends a strong pro-conservation message, it also means that Japan, Norway, and Iceland will continue whaling as they have over the past couple decades, killing an average of 2,000 whales annually. These three countries employ a variety of excuses for their whaling—Iceland and Norway simply state that they do not recognize the whaling ban while Japan claims its whaling is only done for ‘scientific purposes’—but it is clear that they will not end whaling and, to date, there is no punishment for their dismissal of the international treaty.

The other way forward is a complex agreement supported by the United States that would for all intents and purposes end the whaling ban for a period of time, legitimizing the actions of Japan, Norway, and Iceland. However, this agreement would put the whaling activities of these three nations again under the power of the IWC, allowing the regulatory body to progressively lower quotas. A move that some say will cut the number of whales killed every year by half.

So, the argument hinges on whether governments legitimize whale-hunting but cut down the number killed, or say ‘no’ to whaling but essentially change nothing regarding the situation on the high seas where thousands of whales, including endangered species, perish every year on the end of a harpoon.

The two paths forward have not only split nations, but conservation groups who usually stick together on issues such as this. A number of groups—including Whale and Dolphin Conservation Society (WDCS) and the International Fund for Animal Welfare–have stated that the will support no deal that ends the moratorium. Others have said they will support a deal, but only if it includes tougher regulations than so far presented

For example, Greenpeace, the World Wildlife Fund, and the Pew Environmental Group have stated they will accept ‘interim quotas’ (i.e. a limited allowance of whaling over the next decade), if the agreement bans the hunting of endangered species, puts the South Ocean off-limits to whalers, ends the trade in whale meat, and forces Iceland, Norway and Japan to give up the current quotas they award themselves.

This deal would essentially give conservationists everything they want, except of course a total end to whaling. For Japan, Iceland, and Norway it gives them a window of a decade (at least) to continue whaling, but saves them from another ten years of international rancor, since the whaling would be sanctioned by the IWC.

Such a move is surprising for Greenpeace, a large and effective organization that cut its teeth on the whaling issue, since they have long fought any commercial whaling. Facing possible backlash, Greenpeace says their final goal remains the same: to end commercial whaling entirely, only they are willing to allow it for another decade in order to move closer to that goal. Of course,

However, not everyone sees such a deal as progress. A petition signed by 200 scientists was released today that called on the IWC to maintain its ban on whaling.

“The IWC must not undermine the conservation achievements of the last few decades by again endorsing commercial whaling,” the petition read according to the AFP. “There is no evidence that any of the few populations and species known to be increasing have reached, or are anywhere near, the levels that might justify non-zero catch limits.”

These scientists are joined by Australia, looked on by many as the most anti-whaling nation in the world. Of course, at this point the environmental groups’ deal is not on the table, so if a deal is struck it could still very well include the hunting of endangered whales and the continued trade in whale products.

While the way forward would prove much less complicated if Japan, Norway, and Iceland simply gave up whaling altogether, this is unlikely to happen any time soon. Given the situation, anti-whaling governments and conservation groups must decide what’s more important: standing tough (but toothless) on whaling or compromising to reign in the rogue actions of Japan, Iceland, and Norway. 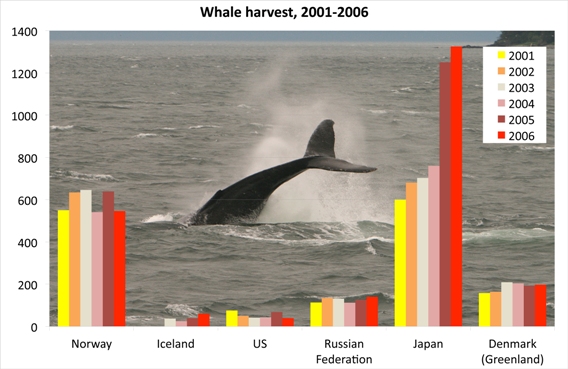 (09/09/2009) Japan Probe reports that the annual dolphin slaughter by fishermen in the Japanese town of Taiji has begun. The hunt was delayed by the presence of Japanese and foreign press in the cove during the first days when the hunt was supposed to begin.

(05/13/2009) The blue whale may be returning to a migration route that it abandoned during commercial whaling. Researchers have discovered whales migrating from California to the coastlines of British Columbia and the Gulf of Alaska for the first time since 1965. Fifteen different cases of whales have been recorded in the north Pacific; four of the whales were individuals who had been viewed off the coast of California, as well.