On May 28th the parliament in Papua New Guinea passed a sweeping amendment that protects resource corporations from any litigation related to environmental destruction, labor laws, and landowner abuse. All issues related to the environment would now be decided by the government with no possibility of later lawsuits.

Uniquely in the world, over 90 percent of land in Papua New Guinea is owned by clan or communally, not be the government. However this new amendment drastically undercuts Papua New Guinea’s landowners from taking legislative action before or after environmental damage is done. Essentially it places all environmental safeguards with the Environment and Conservation Minister.

Comparing the amendment to the US deregulation that paved the way for the massive oil spill in the Gulf of Mexico, Papua New Guinea environmental and human rights lawyer, Tiffany Nonggorr, said the amendment seeks “to remove the checks and balances of the Environmental Act for projects and protect the developer’s interests at the cost of the landowners and the environment”.

The amendment was a direct response due to legal problems of the controversial Ramu Nickel Mine run by Chinese state-owned company Metallurgical Construction Corp (MCC). The 1.4 billion dollar mine has run into delays due to lawsuits from local landowners who have won injunctions to stop a slurry pipe, which would dump mine waste—including mercury and cadmium—directly into a bay in Madang Province, a practice that is actually outlawed in China.

“The plan is to dump a hundred million tons of mining waste over its twenty year life directly into the Astrolabe Bay, which […] is one of the last really good tuna areas. This submarine tailings disposal system is banned in most countries, including China I believe. They say it’s ‘deep water disposal’, but it’s a hundred and fifty meters. It’s not being capped on the seabed in anyway,” Glen Barry recently said in an interview with mongabay.com.

The Papua New Guinean government, headed by Michael Somare, has long-aligned itself with the Chinese government and MCC. The amendment is being seen largely as an attempt to appease the company and push through the mine and slurry pipe regardless of environmental problems and local concerns.

“It might be said that the PM was probably losing a lot of face (maybe more) with the major shareholder, namely the Chinese Government from delays [in the Ramu Nickel Mine],” Paul Barker, head of the non-political research-oriented Papua New Guinea Institute of National Affairs (INA), told mongabay.com. “It was also rammed through Parliament late in the afternoon, with normal required notice for legislation being apparently set aside, and debate in Parliament gagged.”

Barker adds that he was astonished when he heard of the amendment.

“It was like changing the whole environmental rule book as applied to all major economic projects to meet the perceived needs of one or two investors; or more specifically to find an instant overarching way for the government to get around awkward restraint (under the very sound Environment Act) to be able to honor agreements reached with specific investors.”

Like Nonggorr, Barker also saw a resemblance to deregulation in the US leading up to the Gulf of Mexico oil disaster. “[This is] particularly untimely one might think, with the Gulf oil spill currently occurring, where the regulator is seen as being too cozy with the industry in planning and oversight of offshore drilling.”

While the law was spurred on by the legal difficulties of the Ramu Nickel Mine, it will have long standing implications for any resource extractive company working in Papua New Guinea. But that seems to be the idea: after the amendment was passed by the parliament 73 to 10, Environment and Conservation Minister Benny Allen said, according to The Australian, that the amendment was pushed because “national interest” was paramount.

“Before when a miner or oil company wanted to add a new activity to its existing permit, there had to be an application for an amended permit—and really the whole permitting process would start again if it was a major amendment,” Nonggorr explained. “Now, if there is to be some new activity—all the miner has to do is write a letter and the director writes back and authorizes it and his decision is not reviewable or challengeable and can’t be stopped by the landowners and they are not consulted.” The director in this case is Benny Allen.

While this is a radical change in Papua New Guinea law, Barker says that the government is attempting to pass the amendment off as largely benign.

“I’ve heard it argued by Government lawyers that [the amendment is] not intended to restrict anyone’s current rights, if the permits have been properly issued; but that’s half the point,” explains Barker. “Many environmental permits (and other government approvals) are issued following limited analysis by the bureaucracy, which often doesn’t have the resources to examine the Environmental Impact statements thoroughly or to effectively monitor and enforce them (that’s quite apart from any corrupt practices which may prevail).”

The amendment is being challenged. Nonggorr, who recently called the bill “the worst piece of legislation as far as human rights go that I have ever seen in a supposed western democracy”, has filed a Reference with the Papua New Guinea Supreme Court asking them to decide if the new amendment is unconstitutional. Nonggorr says that they are seeking that the law be declared invalid.

For his part, Barker adds that the new amendment is apart of a growing pattern by the Papua New Guinean government to “weaken the already inadequate checks and balances on the Executive”.

“Much of the community has been outraged by recent events, of which this is an additional case […],” he says. “The government must be prepared to listen more, and be less autocratic, including looking at options with wider industry (including mining industry) and other interest groups (e.g fisheries etc) have access to independent international and local expertise, as well as wider community consultations, if they are to calm heated public feeling.”

Conflict over resource extraction corporations in Papua New Guinea has a dark history. Between 1989 and 1999, several thousand people were killed and tens of thousands displace when a group of locals rose up against Australian mining company, Bougainville Copper Limited (BCL) due to environmental damage, allegations of stolen lands, and conflicts over compensation on the island of Bougainville. Employing sabotage and guerilla war tactics, Bougainville natives shut down the mine and threw out Papua New Guinea troops before turning on themselves in civil war. 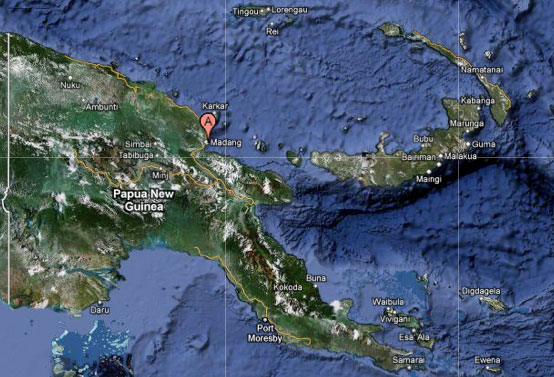 Google Earth image of Astrolabe Bay in the Province of Madang, Papua New Guinea. Legal battles to stop Ramu Nickel Mine from dumping its waste directly into the bay led to the amendment that gives extractive companies impunity to inflict environmental damage without fear of lawsuits from citizens.

(12/10/2009) While officials from around their world are working night-and-day to come up with an international agreement to combat climate change in Copenhagen, the US Export-Import Bank confirmed it will subsidize a natural gas project in Papua New Guinea to the tune of 3 billion dollars—a record for the bank.

(10/21/2009) People from the area of Madang in Papua New Guinea are protesting government plans, supported by the World Bank’s International Finance Cooperation (IFC), to build large-scale industrial tuna canneries and docks, labeled the Pacific Marine Industrial Zone (PMIZ). Over 700 people showed up and marched at the Madang Provincial Governmental Headquarters on October 15th, despite the protest being banned by local police.

(02/23/2009) Nearly one quarter of Papua New Guinea’s rainforests were damaged or destroyed between 1972 and 2002, report researchers writing in the journal Biotopica. The results, which were published in a report last June, show that Papua New Guinea is losing forests at a much faster rate than previously believed. Over the 30-year study period 15 percent of Papua New Guinea’s tropical forests were cleared and 8.8 percent were degraded through logging.

Conflict in PNG between govt and landowners over REDD carbon trading

(11/17/2008) The government of Papua New Guinea is facing criticism over its plan to seek compensation via the carbon market for protecting the country’s rainforests, reports Australian Broadcasting Corporation News (ABC News).

(06/02/2008) Logging is taking a heavy toll on the forests of Papua New Guinea, suggests a new study. Using satellite images to reveal changes in forest cover between 1972 and 2002, researchers from the University of Papua New Guinea and the Australian National University found that Papua New Guinea (PNG) lost more than 5 million hectares of forest over the past three decades — total forest cover declined from 38 million hectares in 1972 to 33 million hectares in 2002. Worse, deforestation rates may be accelerating, with the pace of forest clearing reaching 362,000 hectares (895,000 acres) per year in 2001. The study warns that at current rates 53 percent of the country’s forests could be lost or seriously degraded by 2021.