According to the National Oceanic and Atmospheric Administration, snow cover retreated to the lowest extent ever recorded in North America by the end of this April. Snow cover was 2.2 million square kilometers below average. With records of snow extent beginning in 1967, this is the lowest in 43 years and the largest negative anomaly in the past 521 months.

A new image released by NASA shows just how little snow cover remained in April. Almost the entirety of Eastern and Midwestern United States is free of snow, while big chunks of Canada also lacked any snow cover.

While scientists stress that a single weather event cannot be linked with certainty to global climate change, trends such as earlier springs (i.e. less snow cover during spring months) are not only expected under climate change, but have been recorded in many parts of the world.

In addition to little snow cover in North America, April 2010 was the warmest April worldwide since record-keeping began in the late 19th Century: 0.76 degrees Celsius (1.37 degrees Fahrenheit) above the 20th Century average. 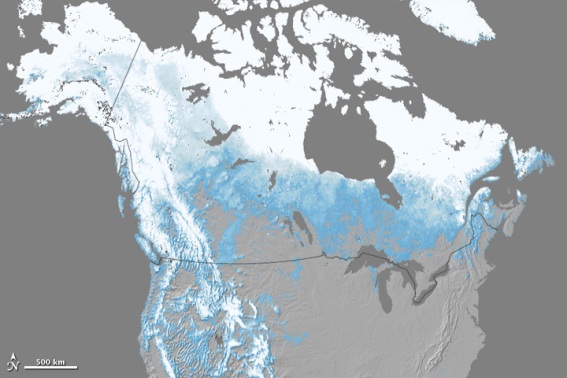 Image shows the percent of snow cover in North America over April 2010. Percent snow cover ranges from just above zero (light blue) to 100 percent (white). Land areas with no detectable snow cover during the month are gray. Photo by: NASA

(05/20/2010) According to the National Oceanic and Atmospheric Administration (NOAA), the past April was the warmest globally since record taking began in the late 19th Century. Combining both land and ocean temperatures, the NOAA recorded that April 2010 was 0.76 degrees Celsius (1.37 degrees Fahrenheit) above the 20th Century average.

(05/13/2010) Lizards have evolved a variety of methods to escape predators: some will drop their tail if caught, many have coloring and patterning that blends in with their environment, a few have the ability to change their colors as their background changes, while a lot of them depend on bursts of speed to skitter away, but how does a lizard escape climate change? According to a new study in Science they don’t. The study finds that lizards are suffering local extinctions worldwide due exclusively to warmer temperatures. The researchers conclude that climate change could push 20 percent of the world’s lizards to extinction within 70 years.

(05/06/2010) Signed by 255 members of the National Academy of Science, a new letter in the journal Science expresses that researchers are “deeply disturbed” by the rancor toward them from some in media and politics. Furthermore the letter outlines, once again, that the science of climate change is based on “compelling, comprehensive, and consistent objective evidence that humans are changing the climate in ways that threaten our societies and the ecosystems on which we depend.”