Commentary by Jeremy Hance on 4 May 2010

Why we get the oil spill we deserve.

America, we deserve the oil spill now threatening the beautiful coast of Louisiana. This disaster is not natural, like the earthquake that devastated Haiti or tsunami that swept Southeast Asia in 2006; this disaster is man-made, American-made in fact, pure and simple.

So, while in the upcoming weeks and months—if things go poorly—we may decry the oil-drenched wildlife, the economic loss for the region, the spoiled beeches, the wrecked ecosystems, the massive disaster that could take decades if not longer to recover from, we, as Americans, cannot think smugly that we are somehow innocent of what has happened. You play with fire: you will get burned. You drill for oil 1,500 meters below the surface of the ocean, you open up oil holes across the surface of your supposedly-beloved landscape, sooner or later there will be a spill, and sometimes that spill will be catastrophic.

We can’t blame BP for this disaster: the tragic loss of life or the petroleum miasma now spreading across the gulf. We can’t blame them even though they lobbied time and again against tougher regulations—and won—including requiring a remote valve system that may have shut down the spill now occurring. Even though they fought greater and more frequent government oversight—and also won—arguing that voluntary regulations were enough.

We can’t blame BP because this is how large corporations act. Big corporations don’t make decisions based on ethical considerations, but something they refer to as ‘risk assessment’, measuring likely outcomes against monetary costs. What is the likelihood of a massive spill that will devastate the Gulf of Mexico? BP thought the level of risk was worth not spending 500,000 US dollars on a remote valve—and instead spent over fifteen million dollars lobbying against such measures. BP did what big companies do: only as much as government requires of them (and sometimes public outcry) and fudges the rest.

After all Americans have endured recently from big corporations—coal ash disaster, financial meltdown, mining deaths—this shouldn’t be at all surprising for the public. This, in fact, should be expected. Corporations, especially of multi-billion dollar, multi-national, greenwashing-variety, don’t really care about environmental protections—unless they are required to—nor do they spend their time deeply fretting over worker safety—unless, again, someone requires they do.

Despite all the PR money can buy, BP isn’t trying to make a better world, only a more profitable one—for its shareholders. It has no other motive, purpose, or goal. This isn’t a secret, but considered a cardinal rule from every class of Econ 101 to Wall Street to BP’s offices.

One could argue that corporations shouldn’t be allowed to act in such a way, but again it’s our laws, our regulations (or lack thereof), and most importantly our economic-social-and-political system that allow corporations to be concerned with little beyond the bottom line. We only have ourselves to blame for allowing BP’s negligence, which, of course, it blames on the company it leased the oil rig from: Transocean. But, again, who expects a multi-billion dollar company to take responsibility for its mess?

We also can’t blame President Obama for opening up millions of acres to offshore drilling, because this what politicians do: they compromise. With pressure from republicans and the oil industry, with a desire to win broader support on a faltering climate and energy bill, and with a chance to show he was all about turning the economy around (no matter the cost), Obama chose to open off-shore drilling pretty much everywhere. It wasn’t his fault that less than a month later events would make him wish he could take back his words and maybe even his decision.

We can’t blame the mainstream media for not better preparing us for the realities of off-shore drilling—or even for that matter the environmental and human costs of drilling anywhere—because enough viewers continue to consume big media even when it has become sensationalized entertainment rather than informative journalism. Although our media focuses more on ideology than substance, pursues its facts from talking heads over actual experts, and thrives on bombast rather than sense, enough of us still watch to keep subpar, ideological, and often insulting programs on the air.

Finally, we can’t simply sit-back and blame the people chanting ‘drill, baby, drill’, because who was standing up on the other side? Who was speaking out to keep drilling off of our coastlines, away from our wildlife, our beaches, and our fishing grounds? Who was calling for an end to the fossil fuel era—and instead spending money and resources pursuing clean energy, greater efficiency, and encouraging less consumption? Who was on the other side organizing rallies, pressing legislators, and giving a voice to: ‘wind, baby, wind’ or ‘solar, baby, solar’? Not our leaders, not our media, and not even many of those who actually understood that one can’t drill without consequences. I admit that some were there, yes, a few stood tall, but let’s be honest most of us didn’t do that much. Maybe sent a few e-mails, made a few calls, but where was the up-rising after Exxon Valdez or Ixtoc 1 or the Chevron debacle (that continues today) in Ecuador?

So, in the end the only ones we can blame are ourselves, and this is why we get the oil spill we deserve.

If any good is to come from any of this, it will come in the form of America finally moving from being fossil fuel-driven to a clean-energy driven. I hope this spill is not for nothing: I hope it forces BP and other energy corporations to start regulating themselves; I hope it convinces President Obama to place a moratorium on off-shore drilling and heavily invest in green energy; I hope it convinces the media to take issues more seriously as their reporting—or lack thereof—has real world consequences; and I hope it convinces the ‘drill, baby, drill’ people that political slogans have power and sometimes a price: so, use wisely.

In the end I hope it forces all of us to take a look at fossil fuel-driven world and to realize it doesn’t have to be this way. We have long possessed the technology to move toward an oil and coal-free world, we only need the will.

But I’m not counting on any of these changes to occur. So if, like with Exxon Valdez, another twenty years goes by and once again we have a massive catastrophic spill—this time let’s say from one of those new oil wells to be built off the coast of Virginia—we’ll have no one to blame but ourselves. 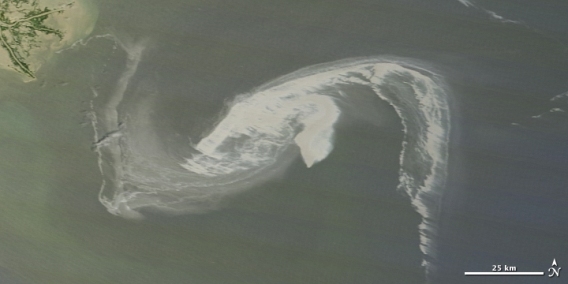 BP’s Oily Political Connections: from the Bush to Obama Era

(05/04/2010) Judging from the oily history of the last ten years, reining in BP could prove politically daunting. A company with incredible economic might, BP has enjoyed privileged access to the inner rungs of Washington power. Only by ridding the political system of insider money can we hope to avert future oil disasters like the devastating spill which hit the Gulf of Mexico last week.

(05/03/2010) Even though they don’t stop over in the Gulf of Mexico, many migrating songbirds could be impacted by the catastrophic oil spill, warns the American Bird Conservancy (ABC). The threats to marine and coastal birds have been well-outlined during the past few days, however birds flying high above the spill could also be vulnerable.

(05/02/2010) An environmental group is organizing collection of human hair from salons and barber shops across the country as part of an effort to clean up the massive oil spill triggered by last month’s deadly explosion of the Deepwater Horizon rig in the Gulf of Mexico.

(04/29/2010) With the news that the amount of oil leaking from below the surface of the Gulf of Mexico could be as much as five times the original estimate put forward by British oil-giant BP, the situation moved from worrisome to desperate.