A new NASA image of the Gulf oil spill shows a trail of oil extending hundreds of kilometers south and then southeast from the spill. At points this new oil trail is at least twenty kilometers wide. Media groups are saying the new arm may be additional proof that oil has been caught up in the Loop Current, which would carry the pollution to Florida coastlines and possibly even the East coast.

Yesterday it was reported that tar balls—small blobs of oil—were washing up on the Florida coast, however researchers are now saying that after testing those tar balls were not from the BP oil spill.

Today the NOAA said that a “small amount” of oil had entered the loop, and the European Space Agency has said that their satellite images also show that the oil has entered the current.

The Gulf oil spill began on April 20th when the BP Deepwater Horizon rig exploded killing eleven and releasing oil from over a mile below the surface. While BP and the government claim the oil has been spilling at a rate of 5,000 barrels a day (210,000 gallons a day), recent video has caused some researchers to say the rate of oil releasing into the Gulf could be ten times that much.

NASA captured the image with satellite, revealing the unknown oil trail by waiting for ocean waves to blur sunlight which allows the oil sheen to standout. 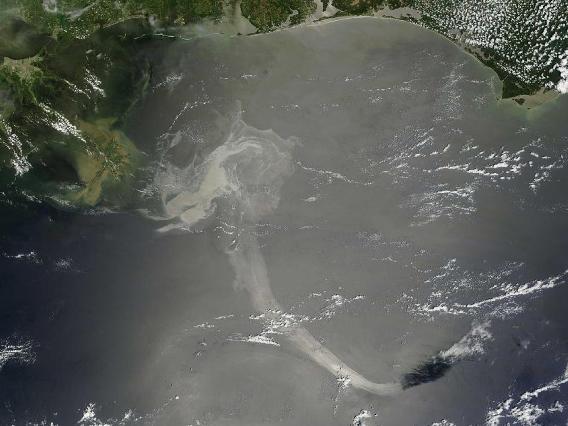 Spill may be spreading: tar balls wash up in the Florida Keys

(05/18/2010) Florida had an unwelcome visitor today as tar balls washed on shore at Fort Zachary State Park in Key West, reports Reuters. Local officials fear the tar balls—small blobs of oil—originated from the Gulf oil spill caused after the Deepwater Horizon offshore oil rig run by BP exploded. If tests determine that tar balls originated from the spill it would confirm that leaking oil is being carried by an ocean current, known as the Loop Current, from the spill site to Florida’s coast.

(05/13/2010) The oil spill in the Gulf of Mexico is taking its toll on the region’s wildlife: brown pelicans, sea turtles, several species of fish, and now dolphins have been found dead. The National Marine Fisheries Service reported today finding six dead dolphins in Louisiana, Mississippi, and Alabama since May 2nd. Officials are saying the deaths could be related to the oil spill or may be due to natural deaths from calving. They are currently testing tissue samples to determine if oil pollution was a cause of death. Dolphins have been observed swimming in oil-stained waters off of Louisiana.