United States has higher percentage of forest loss than Brazil

From 2000 to 2005 the world lost over a million square kilometers of forest.

Forests continue to decline worldwide, according to a new study in the Proceedings of the National Academy of Science (PNAS). Employing satellite imagery researchers found that over a million square kilometers of forest were lost around the world between 2000 and 2005. This represents a 3.1 percent loss of total forest as estimated from 2000. While the study did not look at forest gains during the same time period, it reveals some surprises about where and how much forest was lost: including the fact that from 2000 to 2005 both the United States and Canada had higher percentages of forest loss than even Brazil.

Of the seven nations that contain over a million square kilometers of forest—Russia, Brazil, the United States, Canada, Indonesia, China, and the Democratic Republic of Congo—Brazil lost the most total forest during the five year time period.

Canada was close behind Brazil: losing some 160,000 square kilometers (61,776 square miles) of its forest cover. However, proportionally Canada’s forest loss equals 5.2 percent of the nation’s total forest cover: higher than Brazil’s percentage and over two points higher than the global average.

But the United States had the greatest percentage loss of the seven nations—even more than Brazil and Canada—losing 6 percent of its forest cover in just five years time, a total of 120,000 square kilometers (46,332 square miles). While fire and beetle infestation played a role in Alaska and the western US, large-scale logging industries in the southeast, along the western coast, and in the Midwest play a big role in the nation’s forest loss.

“This does not mean that [the forests] do not regenerate, and we make no statements whatsoever about sustainability,” lead author Matthew Hansen explained to USA Today. “But, compared to other regions of the world, a lot is going on.”

The researchers write that “the often publicized phenomenon of forest conversion within the humid tropics is observed in our results, but significant GFCL [i.e. global forest cover loss] is evident in all biomes. For example, rates of GFCL in regions such as the southeast United States are among the highest globally.”

Of the other seven nations: Indonesia lost 3.6 percent of its forest cover during the five years, Russia 2.8 percent, China 2.3 percent, while the Democratic Republic of Congo lost the smallest percentage: 0.6 percent.

The study also highlights other countries with significant forest loss including Malaysia due to palm oil plantations, Paraguay and Argentina to agriculture, and Australia to fires.

In the boreal 60 percent of the loss was due to fires, while the remaining 40 percent was caused by logging, disease, and infestations of pine beetles linked to climate change.

Dry tropical forests were largely impacted by clearing for agriculture in places like Brazil, Paraguay, and Argentina.

Temperate forests suffered the least amount of total loss because, as the researchers write, “the majority of this biome has long been converted to agricultural and settlement land uses.” Yet proportionally, temperate forests came in second of the four forest types largely due to high forest loss in the United States.

In measuring forest loss, the study calculated forest cover as 25 percent of canopy cover with trees over 5 meters high. 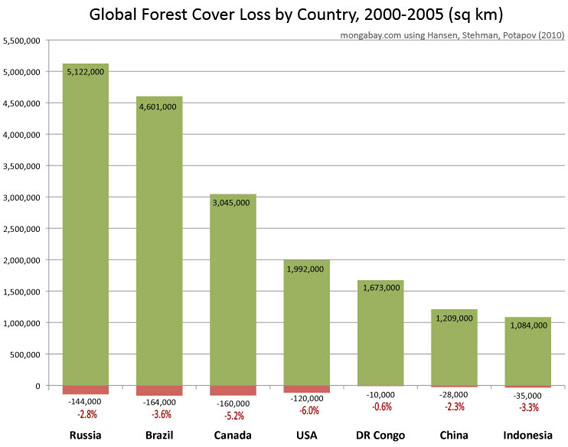 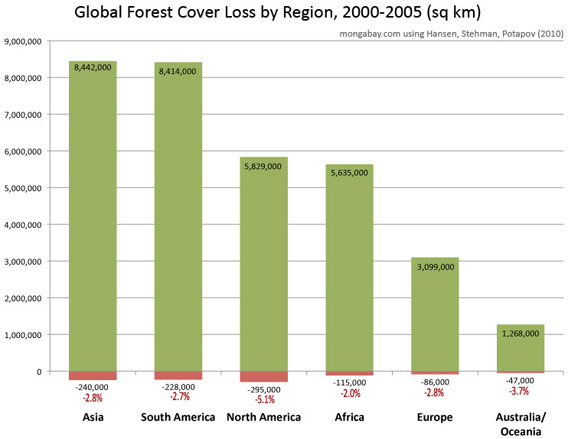 Is deforestation rising or falling in the Amazon?

(04/18/2010) Last week Brazil’s National Space Agency INPE reported a 51 percent drop in Amazon deforestation in the six months ended February 2010 compared with the year earlier period. But the seemingly happy news for environmentalists may be premature.

(04/07/2010) The United States’ Eastern forests have suffered a “substantial and sustained net loss” over the past few decades, according to a detailed study appearing in BioScience. From 1973 to 2000, Eastern have declined by 4.1 percent or 3.7 million hectares. Deforestation occurred in all Eastern regions, but the loss was most concentrated in the southeastern plains.

(03/07/2010) Brazil and the United States have signed an agreement to worth together to reduce deforestation as part of an effort to slow climate change.

(03/03/2010) Australia will contribute A$30 million to a project to reduce deforestation in the province of Jambi, on the Indonesian island of Sumatra, reports Reuters.

Little more than 10,000 hectares of rainforest remains on Java

(01/24/2010) From 2003-2006, Java lost approximately 2,5000 hectares a year (10,000 hectares of forest in total) according to the Forestry Ministry. Despite the rate of loss being far lower in Java than other Indonesian islands (such as Borneo, Sumatra, and Sulawesi), Java is particularly threatened because there is so little forest left. If the past rate of deforestation occurs from 2007-2010 then by the end of the year conservation organization Pro Fauna predicts only 10,000 hectares of rainforest will remain on the island, leaving a number of unique and endangered species in deep trouble.

Brazil: king of conservation, deforestation for the 2000s

(12/15/2009) While one tropical forest policy group saw hopeful signs emerging in the most recent revision of the negotiating text on the reducing emissions from deforestation and degradation (REDD) mechanism at climate talks in Copenhagen, activist groups are warning that there remains a substantial logging loophole for developed countries.

(12/09/2009) While developing countries in the tropics have received a lot of attention for their deforestation emissions (one thinks of Brazil, Indonesia, and Malaysia), emissions from logging—considered forest cover change—in wealthy northern countries has been largely overlooked by the media. It seems industrialized countries prefer it this way: a new study reveals just how these countries are planning to hide forestry-related emissions, allowing nations such as Canada, Russia, and the EU to contribute to climate change without penalty.