Turning to the matrix: a more accurate way to predict extinction

According to most conservationists the globe is striding into the midst of the Sixth Mass Extinction. Species populations worldwide are dropping and in many cases species are vanishing all together due to pollution, climate change, poaching and hunting, overconsumption, invasive species, and exotic diseases, but no threat proves more pervasive and devastating for the world’s species than habitat loss.

Discovering where species are most in trouble and where they are relatively secure has become a passion for many conservationists since such information allows attention and funds to be focused to the right places. Scientists have long employed the ‘island biogeography theory’ to decipher species’ vulnerability, but a new model announced in a paper in Conservation Biology is more accurate than island biogeography at predicting trouble spots and extinctions.

According to co-author Lian Pin Koh, the idea for the model was brought up by a question from David Wilcove, an ecologist at Princeton. Wilcove asked Koh, “which was worse—losing a small portion of a forest to oil palm agriculture, or selectively logging a large part of the forest?”

While Koh found the question “hugely important”, he knew that the island biogeography theory would not answer it. Island biogeography theory looks at the world as ‘islands’ of habitat and non-habitat for species. In general it looks at suitable habitat as pristine islands surrounded by a sea of unsuitable habitat where species cannot survive, thereby determining the relationship between species and area as more habitat—larger ‘islands’—equals more species. Developed in 1967 by Robert MacArthur and Edward O. Wilson, the theory has aided conservationists for decades.

“In the 1970s when conservation biology began to take off in the US, the species-area relationship and island biogeography theory had great influences on some of the people wanting to conserve forests and biodiversity,” explains Koh. “Because, when applied to terrestrial landscapes, the species-area relationship implies that more species would be expected to go extinct when more forests are lost, and conversely, to save more species we would need to protect more forests.”

Koh adds that “of course, this simplistic notion has had its fair share of critics until today, primarily because islands of forested habitats on a mainland are not exactly the same as true islands in an ocean.”

But how are forests on the land different from islands in the sea in terms of species extinction?

“One of the main differences between habitat islands and true islands is the intervening matrix,” says Koh. By ‘matrix’, Koh does not mean an alternate reality where one can fight in slow-motion, but instead the type of landscapes in targeted areas, such as old-growth forests, secondary forest, small-scale agriculture, pasture, plantations, urban landscapes, and many others.

“In true island systems, the matrix is the ocean. It is quite reasonable to assume that most terrestrial organisms would not survive very well in this ocean matrix. The same, however, cannot be said of the matrix between habitat islands on a mainland because, in this case, the matrix could be a whole variety of land uses,” Koh says, adding that “the main constraint of the conventional species-area model is that it assumes all organisms respond exactly the same to matrix (i.e. to be like an ocean).”

For example, a Komodo dragon cannot survive in the ocean and so its habitat is literally constricted to the islands it lives on. If those islands were to become inhabitable—for example if sea levels rose and swamped them—the Komodo dragon would go extinct. In turn, while a leopard cat surely thrives in pristine rainforest, it may also survive in partially logged forest and even in some agricultural areas. So, even if the leopard cat loses all of its forest habitat—or most of it—the species may survive in other areas.

However, the situation is far from simple. For example, one bird species may survive in forests and in certain types of agriculture, but another bird species may only survive in pristine forests, while a third may inhabit everything from forest to plantations to urban environments. So, how does one predict extinction in face of such complexities?

To answer this, Koh has developed a matrix-calibrated model that “takes account of the specific response of the organisms to each component of matrix”. In other words Koh’s model combines habitat loss with a species’ sensitivity to surrounding matrices to determine the likelihood of extinction.

Not satisfied with simply developing a new model, Koh tested the new model, dubbed the matrix model, against the conventional island biogeography theory and another theory, called the countryside model, in a “‘prediction accuracy’ competition”. The test looked at survival of bird species in 20 biodiversity hotspots.

“The winner would be the model that produced predictions that were closest to actual known bird extinctions or endangerment,” Koh said.

The matrix model took first prize. “I found that the matrix-calibrated model was the best model among all models considered, and it was 13.5 times more strongly supported by the data than the conventional model,” Koh says. The countryside model proved least accurate of the three, while the conventional model overestimated extinction in 18 of 20 of the hotspots—not surprising since this model assumes all habitats outside of forest are unlivable which may be true for some species but hardly all.

“The matrix-calibrated model can now be used to explore the consequences of changes in the entire landscape, including not just the amount of forest but also the quality of the resultant land uses that now comprise the matrix. Not only will conservationists be able to make more accurate predictions of biodiversity loss from land-use change, they could also use the matrix-calibrated model to predict potential biodiversity enhancements from improvements in the quality of the matrix,” Koh says, adding that “to me this is a significant step forward because now we can potentially prescribe measures to increase biodiversity!”

The model will also help in questions of tradeoffs between conservation and development (or different types of development), for example, conservationists can now “explore tradeoffs in biodiversity between the options of converting a large part of a forested landscape to extensive but wildlife-friendly agriculture versus converting only some parts of the forest to intensive production systems,” explains Koh. “These very practical questions could not have been addressed with the conventional species-area model.”

Koh has already answered the question that led to the new model. According to the paper, “converting 1 acre of Borneo’s primary forest to oil palm is roughly as bad for biodiversity as selectively logging 2.5 acres of the forest”.

Koh argues that while the matrix model may be less cautious and conservative than the island biogeography theory, its overall accuracy will better serve conservationists and environmentalists in the long-run.

“While erring on the side of caution may be desirable from a strict conservationist perspective, I believe that is a less tenable position nowadays, given that donors to conservation causes and the general public are expecting more accurate prognosis of environmental ills, and are less tolerant of environmental blackwashing,” Koh says. “Also, given increasingly limited conservation resources, it is invaluable to be able to accurately target them where most needed.” 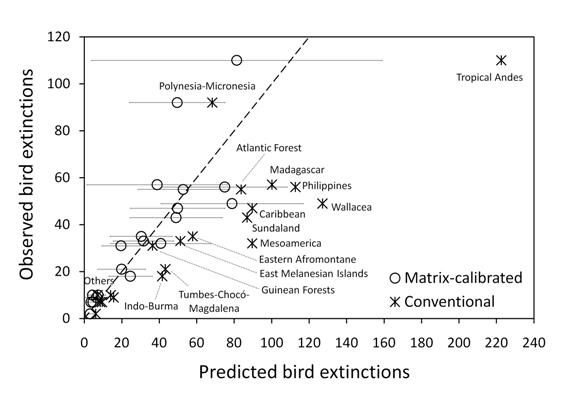 Comparisons of
observed and predicted numbers of extinct and threatened endemic bird species in 20 biodiversity hotspots.

(04/08/2010) One of the greatest barriers to saving the world’s biodiversity is simply a lack of knowledge: to date less than 50,000 species have been surveyed by the IUCN Red List regarding their threat level, while the vast majority of the world’s species are left unanalyzed especially fungi, plants, fish, reptiles, and insects and other invertebrates. To address this problem, some of the world’s top biologists have proposed a 60-million US dollar program they dub the ‘barometer of biodiversity’ to gather a representative sample of all taxons.

(03/09/2010) Extinctions are currently outpacing the capacity for new species to evolve, according to Simon Stuart, chair of the Species Survival Commission for the International Union for the Conservation of Nature (IUCN).

(02/18/2010) Of the known 634 primate species in the world 48 percent are currently threatened with extinction, making mankind’s closes relatives one of the most endangered animal groups in the world. In order to bring awareness to the desperate state of primates, a new report by the International Union for the Conservation of Nature highlights twenty-five primates in the most need of rapid conservation action. Compiled by 85 experts the report, entitled Primates in Peril: The World’s 25 Most Endangered Primates, 2008–2010, includes six primates from Africa, eleven from Asia, three from Central and South America, and five from the island of Madagascar.

(01/11/2010) In a kick-off event for the UN’s Year of Biodiversity, German Chancellor Angela Merkel, compared the importance of saving biodiversity to stopping climate change.

Gone: a look at extinction over the past decade

(01/03/2010) No one can say with any certainty how many species went extinct from 2000-2009. Because no one knows if the world’s species number 3 million or 30 million, it is impossible to guess how many known species—let alone unknown—may have vanished recently. Species in tropical forests and the world’s oceans are notoriously under-surveyed leaving gaping holes where species can vanish taking all of their secrets—even knowledge of their existence—with them.

What types of primates are most prone to extinction in small forest fragments?

(12/06/2009) According to the most recent IUCN assessment, 48 percent of primates are threatened with extinction. Major threats to primates include habitat loss and fragmentation, hunting, and the wildlife trade. A new paper published in Tropical Conservation Science looked at ones of these threats — fragmentation — in an effort to determine what traits put primates at highest risk of extinction in forest fragments. Traits investigated all related to various aspects of primate biology, including: the amount of habitat needed, reproductive rate, and types of specialization. Surprisingly the authors, Matthew A. Gibbons and Alexander H. Harcourt of the University of California at Davis, found no significant relationship between extinction risk and any of the biological parameters.