Humankind’s appetite for seafood has had a bigger impact on the world’s marine turtles than long thought. A new report by Conservation International (CI) in partnership with Duke University’s Project GloBAL (Global By-catch Assessment of Long-lived Species) finds that in the past eighteen years it is likely millions of marine turtles have been killed as bycatch by the world’s fisheries.

Revealing the true extent of fisheries’ role in collapsing marine turtle populations, the first ever global survey of sea turtle bycatch found that from 1990-2008 approximately 85,000 marine turtles were officially reported killed as bycatch, yet a staggering amount of unreported mortalities likely raise that total into the millions.

“Because the reports we reviewed typically covered less than one percent of all fleets, with little or no information from small-scale fisheries around the world, we conservatively estimate that the true total is probably not in tens of thousands, but in the millions of turtles taken as bycatch in the past two decades,” explains Dr. Bryan Wallace, the Science Advisor for CI’s Sea Turtle Flagship Program and one of the reports lead authors, in a press release.

‘Bycatch’ is a term for species killed unintentionally by fisheries. Marine turtles are especially susceptible to bycatch since like all reptiles, they breathe air. Therefore they must frequently reach the surface of the ocean in order to breathe. If caught in a fisherman’s net or on a hook the marine turtle quickly drowns. In addition, marine turtles frequently swallow hooks which can become lodged in their throats or stomachs, leading to severe injuries. The most dangerous fishing equipment for marine turtles includes gillnets, longlines, and trawls.

Marine turtle populations worldwide have suffered gravely over the past century with some regional populations collapsing entirely. Currently the IUCN Red List classifies six of the seven marine turtles as threatened with extinction, while the flatback marine turtle, endemic to Australia, is considered Data Deficient. Three of the world’s marine turtles are classified Critically Endangered: the world’s largest, the leatherback; the hawksbill; and Kemp’s ridley. Despite a barrage of threats, including plastic garbage, pollution, beach development, light pollution, egg poaching, and climate change, the report highlights that the most pressing threat remains bycatch.

The report identified four areas where urgent conservation measures are necessary due to fishery bycatch: the Mediterranean, the Eastern Pacific, the Southwest Atlantic, and the Northwest Atlantic. The crowded, heavily-fished Mediterranean Sea has some of the highest bycatch rate in the world due to the concentrated use of longline fishing and trawling. The Eastern Pacific—from Baja California to Chile—possesses critical nesting sites for marine turtles, but bycatch rates are also high from both artisanal and industrial fisheries. In addition, off the coast of the eastern United States, the Southwest and Northwest Atlantic has high numbers of longline and trawling bycatch.

“We have only begun to scratch the surface about the realities of sea turtle bycatch,” said Wallace. “Our review revealed important data gaps in areas where small-scale fisheries operate, especially Africa, the eastern Indian Ocean and Southeast Asia. These regions and fisheries are urgent priorities for enhanced monitoring and reporting effort so that we can fill in some blanks about turtle bycatch.”

The report stresses that better management and changes in the way fisheries operate—both large and small—could prevent many marine turtle mortalities due to bycatch. In addition, mitigating the threat of bycatch would not only help marine turtles, but other bycatch victims, including sea birds, dolphins, sharks, and even whales.

Simple changes in gear, such as the use of circle hooks instead of J-shaped hooks have a big impact on turtle mortality. For trawling fishing—often used for shrimp—Turtle Excluder Devices (TEDs) allows marine turtles to escape drowning through a hatch in the trawl.

The report also recommends implementing seasonal and time-area closures, which halts fishing during peak-marine turtle presence. Most marine turtles migrate and therefore are only present in certain regions at particular times of the year.

Finally, the implementation of catch-shares programs and increasing Marine Protected Areas (MPAs) would not only aid endangered species like the world’s marine turtles, but would help sustain populations of the world’s targeted fish species for future generations.

“Sea turtles are sentinel species of how oceans are functioning. The impacts that human activities have on them give us an idea as to how those same activities are affecting the oceans on which billions of people around the world depend for their own well-being.” said Dr. Wallace. “Our hope is that this study gives governments and fisheries alike another impetus for bolstering on-going efforts to reduce sea turtle bycatch and to promote more sustainable fishing practices as soon as possible.”

Of course, saving sea turtles is also the responsibility of seafood consumers. The report encourages consumers to use sustainable seafood guides and resources like FishPhone to make marine turtle-friendly choices at the supermarket and in restaurants. 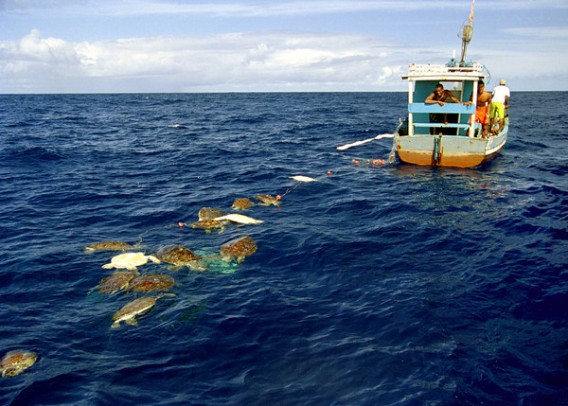 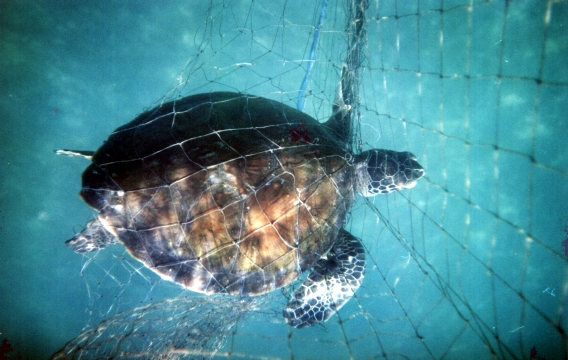 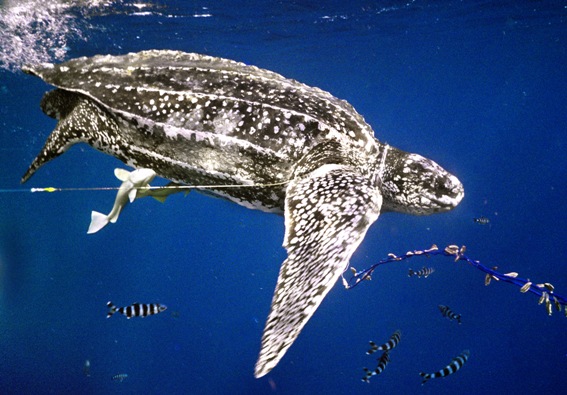 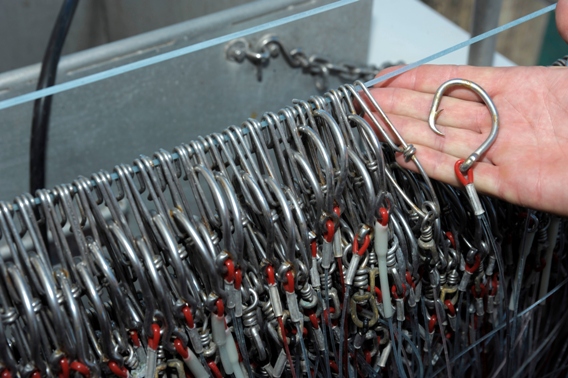 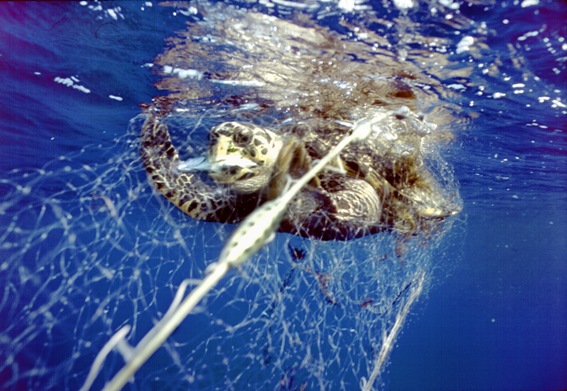 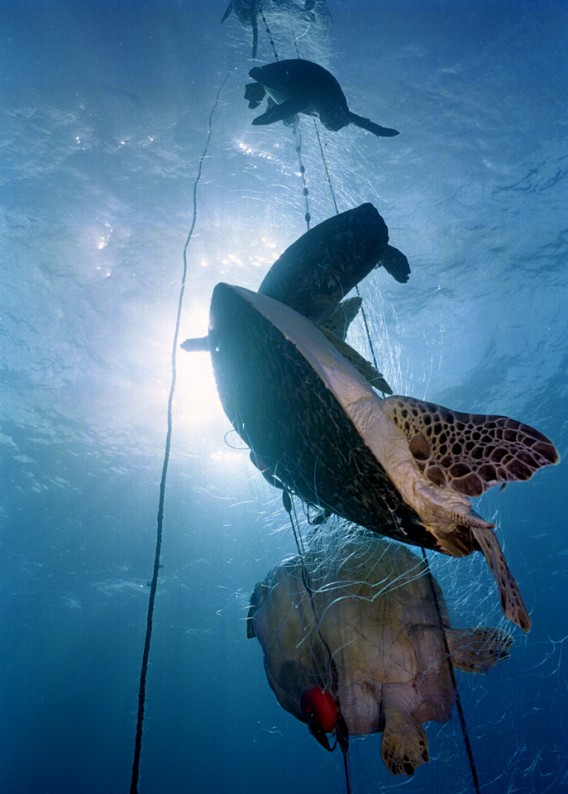 (11/11/2009) Costa Rica is considered by many to be a shining example of environmental stewardship, preserving both its terrestrial and marine biodiversity while benefiting from being a popular tourist location. However, a new move by the Costa Rican government has placed their reputation in question. In May of this year the President of Costa Rica, Oscar Arias, presented a law to the legislature that would downgrade Las Baulas from a National Park to a ‘mixed property wildlife refuge’. The downgrading would authorize a number of development projects that conservationists say would threaten the park’s starring resident: the leatherback turtle.

(03/17/2009) A new study in Marine Pollution Bulletin has confirmed that the world’s largest sea turtle is succumbing in startling numbers to an environmental issue that receives little attention: plastic trash in the oceans.

(02/17/2009) Beginning today in Brisbane, Australia, the 29th annual Symposium on Sea Turtle Biology and Conservation will feature the flatback sea turtle, native to Australia and probably the least-studied of the marine turtle species. For a hundred years biologists debated as to how closely the flatback marine turtle was related to the green sea turtle. Several unique attributes of the flatback came to the forefront. The name ‘flatback’ describes the turtle’s distinct flattened carapace. The species also lays the largest eggs of any sea turtles, proportional to their size. However, perhaps most distinctly the flatback is the only marine turtle to call one nation home. The flatback forages, mates, and lays eggs along Australia’s coats; its penchant for swimming, rather than riding oceanic currents, keeps it from migrating across oceans as other turtle do.

(01/27/2009) After a year studying marine biology at Moss Landing Marine Labs, Liz McHuron headed off to the little-known nation of Suriname to monitor leatherback sea turtles. Her responsibilities included implementing a conservation strategy for a particular beach, moving leatherback nests in danger of flooding, and educating volunteer workers on the biology, behavior, and conservation efforts of the world’s largest, and most unique, marine turtle. I visited McHuron during her time at the beach of Galibi in Suriname; she proved to be the sort of scientist who refused to be deterred: breathtaking humidity or downpours, fer-de-lances on the beach or jaguars, Liz was always on the move, always working to aid the critically-endangered leatherbacks while studying them with the thoroughness inherit in a born scientist.

(11/17/2008) This week almost 500 mosques around the Malaysian state of Terengganu will present sermons on turtle conservation, reported the New Strait Times.

(10/15/2008) Thousands of endangered loggerhead sea turtles are being killed as bycatch in the Mexican fishing industry, reports a new study published in the journal Endangered Species Research.

(08/18/2008) This year has been full of bad news regarding marine ecosystems: one-third of coral species threatened with extinction, dead-zones spread to 415 sites, half of U.S. reefs in fair or bad condition, increase in ocean acidification, tuna and shark populations collapsing, and only four percent of ocean considered pristine. Jeremy Jackson, director of the Scripps Center for Marine Biodiversity and Conservation at the University of California, San Diego, synthesizes such reports and others into a new paper, published in the journal Proceedings of the Naional Academy of Sciences, that boldly lays out the scope of the oceanic emergency and what urgently needs to be done.

Discovery of new leatherback migration route may help save species

(07/15/2008) Scientists have discovered a new migration route for the world’s largest turtle, the leatherback. The route takes the 2,000-pound marine turtle from the Playa Grande beaches in Costa Rica to an area deep in the South Pacific.

(07/15/2008) The first hatching of Green Turtles recorded as a direct result of efforts to protect the species in southwest Madagascar has been witnessed by marine conservationists working for British charity, Blue Ventures conservation.

(07/08/2008) The northern coast of Suriname is one of the best places in the world to view the largest turtle, the marine Leatherback. Watching the turtle rise out of the tides onto the beach gives one the sense of meeting something ancient, rare, and more sea-monster than marine turtle. Yet, if I call it a sea-monster, I do not mean that it is frightening or ugly: far from it. But it is mysterious, terrible, and wondrous.

(12/18/2007) conservation of sea turtle nesting sites is paying off for the endangered reptiles, reports a new study published this week in the journal Global Ecology and Biogeography. A team of researchers led researchers from IUCN and conservation International found that green turtle (Chelonia mydas) nesting on four beaches in the Pacific and two beaches in the Atlantic have increased by an four to fourteen percent annually over the past two to three decades as a result of beach protection efforts.

(11/14/2007) Marine turtles have thrived for more than 100 million years. But only the last few hundred years have given the huge, spectacular, prehistoric amphibians serious trouble.

(08/01/2006) Current conservation assessments of endangered Caribbean sea turtles are too optimistic due declines of populations on historically important nesting beaches, according to new research from the Scripps Institution of Oceanography. The plunge has significant ecological consequences.

(08/11/2005) Using machetes, poachers killed some 80 protected Olive Ridley sea turtles on Escobilla beach in Oaxaca, Mexico last weekend. The poachers were believed to be after turtle eggs, thought to be an aphrodisiac among locals. The discovery of the massacre was accouned by Profepa, the government’s environmental protection agency.