Twenty years of research has led Dr. Graham Jones of Australia’s Southern Cross University to discover a startling connection between coral reefs and coastal precipitation. According to Jones, a substance produced by thriving coral reefs seed clouds leading to precipitation in a long-standing natural process that is coming under threat due to climate change.

“Coral reefs produce a volatile substance called dimethylsulphide or DMS which oxidizes in the atmosphere to produce cloud condensation nuclei (CCN). These are tiny sulphur aerosol particles around which water vapor condenses to form clouds,” Jones explained to mongabay.com, adding that, “water vapor cannot form clouds without these tiny aerosol particles being present.”

The DMS is produced by the algae living in coral tissues, causing the corals to produce the cloud-seeding substance, DMS, on a daily basis. However, Jones has also tracked important seasonal patterns. In Australia “we have found more cloud seeding substances are produced by coral reefs in the hot summer monsoonal season from November to February,” he says.

Yet, in his studies, Jones has discovered that even a slight rise in ocean temperatures could affect this natural process, making climate change a significant threat to clouds (and precipitation) seeded by coral reefs.

“When we put small pieces of staghorn coral (Acropora the branching coral which is the dominant coral in the Indo-Pacific region) in chambers containing seawater at Heron Island coral cay the production of atmospheric DMS shuts down when we increase seawater temperatures by only 2 degrees Celsius above the yearly mean,” says Jones who has published results showing that this occurs in the field as well as the laboratory. “What this suggests is that fewer CCN (cloud condensation nuclei) are produced over coral reefs during high sea surface temperatures and so cloud cover could be expected to be lower or non-existent during high seas surface temperatures.”

This pattern of less cloud cover due to warmer temperatures can already be seen during El Nino years.

“What we think happens then is that during an El Nino which can produce doldrum conditions in the Great Barrier Reef, sometimes for a couple of weeks at a time, this process shuts down,” says Jones, explaining a feedback system where the warmer temperatures decrease cloud cover through shutting down the coral’s production of DMS, which in turn further warms the ocean since more sunlight reaches the sea surface. Once the sea surface temperatures exceed the coral’s tolerance level, the corals suffer bleaching, which leads to wide-spread coral stress and even mortality.

“Consequently,” Jones says, “no clouds, no rain in the regional areas where reefs occur.”

The consequences of disrupting this natural process can be huge. For one thing Jones asserts that some rainforests are fed precipitation during certain seasons by the coral reef’s ability to produce clouds

“The best example is the rainforests of north Queensland,” he says. “They are right in the path of the Southeast Trade Winds which blow over the reef for most of the year. Then in the monsoonal summer they receive air masses from the northeast monsoon and north monsoon. So in the summer [Australia’s] north is greatly affected by the build up of these clouds.”

Jones says that the Australian government has a number of policies in place to protect coral reefs, but “what we don’t have is funding of basic reef processes such as this one, which significantly can affect regional climate in the Great Barrier Reef.”

Research into how ecosystems, such as coral reefs and forests, may be involved in regional climate patterns has been gaining steam over the years. Two Russian scientists have published a number of studies on a controversial theory that forests actually ‘pump’ rain from the coast to continent’s interiors.

If such theories withstand the test of time, and science, they could have widespread implications for the conservation of both forests and coral reefs, adding a new and vital ecosystem-service provided by these two threatened environments: the ‘makers’ and ‘movers’ of precipitation. 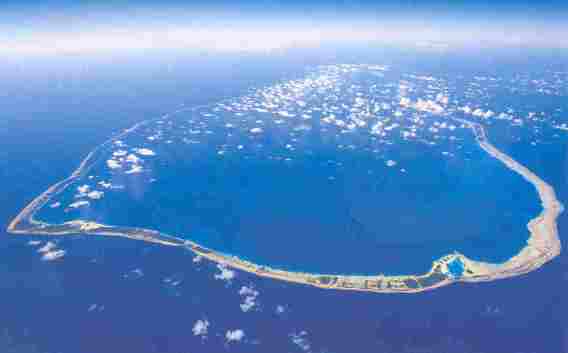 Jones writes: “The attached picture shows Rangiroa coral atoll in French Polynesia producing these nascent clouds on the windward side of the atoll where the wind is affecting that part of the island and turbulence is occurring over the barrier reef which circles the atoll. They are quite low lying clouds and as they travel over the ocean the hygroscopic (water loving) aerosol particles pick up moisture. If conditions are suitable rain will occur when the CCN grow to produce cloud droplets with enough mass to fall as rain.” Photo by: Pacific Promotion Tahit).