Guyana bans gold mining in the ‘Land of the Giants’

Guyana has banned gold dredging in the Rewa Head region of the South American country after pressure from Amerindian communities. A recent expedition to Rewa Head turned up unspoiled wilderness and mind-boggling biodiversity. The researchers, in just six weeks, stumbled on the world’s largest snake (anaconda), spider (the aptly named goliath bird-eating spider), armadillo (the giant armadillo), anteater (the giant anteater), and otter (the giant otter), leading them to dub the area ‘the Land of the Giants’.

“During our brief survey we had encounters with wildlife that tropical biologists can spend years in the field waiting for. On a single day we had two tapirs paddle alongside our boat, we were swooped on by a crested eagle and then later charged by a group of giant otters. I think that about sums the place up. There is little human disturbance in the Rewa Head and wildlife flourishes,” one of the expedition members, Rob Pickles, said in a press release.

Pickles, a PhD student studying giant river otters, teamed up with another PhD student, tapir-expert Niall McCann, to explore the area with the aid of the Zoological Society of London (ZSL). Astonishingly the team encountered six anacondas during their expedition, four of which were over 16 feet long.

But it wasn’t just big species that the team recorded, but rare ones as well. Pickles and McCann recorded the presence of half of Guyana’s listed threatened species during their expedition, including crested and harpy eagles, as well as the little-seen bush dog.

“Visiting the Rewa Head felt like we were walking in the footsteps of Wallace and Bates, seeing South America with its natural density of wild animals as it would have appeared 150 years ago,” Pickles told mongabay.com in a recent interview
regarding their expedition.

The ban on gold mining has been entirely due to efforts by the local Amerindian communities. Pickles says that gold mining was a “major, imminent threat” to the pristine area. However, despite the good news that Guyana has banned gold mining in the area, the Rewa Head remains threatened.

“[The area] currently lies in a logging concession. Unless Guyana is given alternative financial incentives, its government will be forced to lease its land to oil drillers, miners and loggers. One of the world’s last Edens is on the brink of destruction,” explains Niall McCann.

Currently, the US-owned company, Simon and Shock International, has a license to extract timber from 400,000 hectares, while oil drilling concessions cover 78 million hectares.

McCann and Pickles are working with ZSL conservationists to gain international support for the government of Guyana’s plan to conserve its vast forests as a carbon sink for financial returns. According to the conservationists, the area is a perfect testing ground for projects like REDD+ (Reducing Emissions through Deforestation and Forest Degradation).

“Guyana is in an incredibly fortunate position in that it still retains 76 percent of its forest cover which constitutes some of the most carbon-rich forests of South America. As such, and with a president keen to offer his nation’s forests as part of the world’s carbon sink, Guyana should be embraced by the international community,” Pickles told mongabay.com in the interview.

In all Pickles and McCann recorded 251 bird species and 33 large mammal species in Rewa Head.

“In the wake of Copenhagen and the build up to the Convention on Biological Diversity, reducing biodiversity loss and greenhouse gas emissions are high on the political agenda. Protecting areas such as the Rewa Head through sustainable management is a positive strategy for addressing these key issues,” said Professor Jonathan Baillie, Director of Conservation at ZSL, adding that “global leaders need to recognize that real economic benefits are to be gained through the conservation, not destruction, of our world’s living things.” 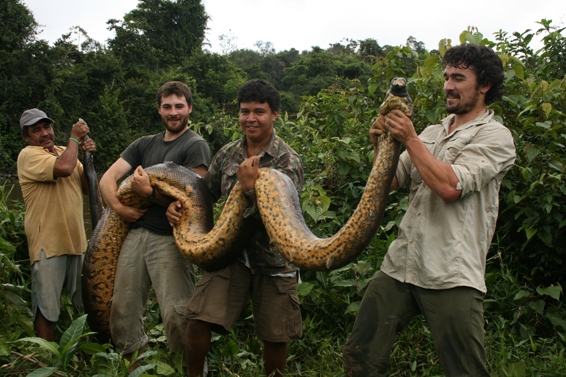 The jaguar Panthera onca is classified as Near Threatened: a previous six-week expedition to Rewa Head observed ten jaguars. Photo by: Ashley Holland and Gordon Duncan. According to biodiversity report: “In the dry season huge sandy beaches are exposed in the Lower Rewa, providing a nesting ground for giant South American river turtles (Podocnemis expansa). The superabundance of eggs laid in these sand banks is a boon which many forest species time their breeding cycle to coincide with.” Photo by Ashley Holland. “Hand-axe sharpening grooves and geometric designs below Corona Falls on the River Rewa testify to the fact that there were once indigenous people inhabiting this area,” according to Biodiversity report. Photo by: Rob Pickles. (11/29/2009) An expedition deep into Guyana’s rainforest interior to find the endangered giant river otter—and collect their scat for genetic analysis—uncovered much more than even this endangered charismatic species. “Visiting the Rewa Head felt like we were walking in the footsteps of Wallace and Bates, seeing South America with its natural density of wild animals as it would have appeared 150 years ago,” expedition member Robert Pickles said to Mongabay.com.

(12/21/2009) As apart of a deal with Norway to preserve its rainforests, Guyana will step up oversight of its gold mining industry, which has been accused of causing significant environmental damage including deforestation and mercury and cyanide pollution.

Norway to give Guyana up to $250M for rainforest conservation

(11/09/2009) Norway will provide up to $250 million to Guyana as part of the South American country’s effort to avoid emissions from deforestation.

Roads are enablers of rainforest destruction

(09/24/2009) Chainsaws, bulldozers, and fires are tools of rainforest destruction, but roads are enablers. Roads link resources to markets, enabling loggers, farmers, ranchers, miners, and land speculators to convert remote forests into economic opportunities. But the ecological cost is high: 95 percent of deforestation in the Brazilian Amazon occurs within 50-kilometers of a road; in Africa, where logging roads are rapidly expanding across the Congo basin, the bulk of bushmeat hunting occurs near roads. In Laos and Sumatra, roads are opening last remnants of intact forests to logging, poaching, and plantation development. But roads also cause subtler impacts, fragmenting habitats, altering microclimates, creating highways for invasive species, blocking movement of wildlife, and claiming animals as roadkill. A new paper, published in Trends in Evolution and Ecology, reviews these and other impacts of roads on rainforests. Its conclusions don’t bode well for the future of forests.

(07/02/2009) The World Bank’s Forest Carbon Partnership Facility (FCPF) has approved REDD readiness plans (R-Plans) for Panama and Guyana, and rejected a plan for Indonesia, reports the U.N. and the Bank Information Center, an advocacy group.

Norway to pay Guyana to save its rainforests

(02/05/2009) Norway will provide financial support for Guyana’s ambitious plan to conserve its rainforests, reports the Guyana Chronicle. Meeting in Oslo, Norway on Tuesday, Guyana President Bharrat Jagdeo and Norwegian Prime Minister Jens Stoltenberg signed a Memorandum of Understanding agreeing to establish a partnership to reduce greenhouse gas emissions from deforestation and forest degradation (REDD). The leaders will push for the incorporation of a REDD mechanism that includes low deforestation countries like Guyana in a post-2012 climate change agreement.

(07/24/2008) Fourteen countries have been selected by the World Bank to receive funds for conserving their tropical forests under an innovative carbon finance scheme.

600 species of mushrooms discovered in Guyana

(07/21/2008) In six plots of Guyanese rainforest, measuring only a hundred square meters each, scientists have discovered an astounding 1200 species of macrofungi, commonly known as mushrooms. Even more surprising: they believe over 600 of these are new to science — that’s equivalent to a new species every square meter.

(07/20/2008) Iwokrama, which lies in the heart of Guyana’s rainforest, is known worldwide for its innovative approach to preserving tropical rainforests and creating livelihoods for local communities. Their focus has been to create programs that utilize the forest sustainably, allowing for a mutual benefit between the people and the forest itself. Currently, Iwokrama has a number of initiatives under its umbrella, including eco-tourism, sustainable forestry, on-going research projects, and training programs. Amid these bustling projects, a new one has emerged: butterfly farming.

(06/14/2008) Soil and climate patterns in the Guiana Shield make the region particularly sensitive to environmental change, said a scientist speaking at a biology conference in Paramaribo, Suriname.

(03/27/2008) A private equity firm has purchased the rights to environmental services generated by 371,000 hectare rainforest reserve in Guyana. Terms of the deal were not disclosed, but the agreement is precedent-setting in that a financial firm is betting that the services generated by a living rainforest — including rainfall generation, climate regulation, biodiversity maintenance and water storage — will eventually see compensation in international markets.

(11/26/2007) Guyana has offered up the entirity of its remaining forest cover as a giant carbon offset, reports The Independent.

(08/13/2007) Countries that have done the best job protecting their tropical forests stand to gain the least from proposed incentives to combat global warming through carbon offsets, warns a new study published in Tuesday in the journal Public Library of Science Biology (PLoS). The authors say that “high forest cover with low rates of deforestation” (HFLD) nations “could become the most vulnerable targets for deforestation if the Kyoto Protocol and upcoming negotiations on carbon trading fail to include intact standing forest.”