Plans for a coal power plant in the Malaysian state of Sabah in northern Borneo have run into stiff opposition. Environmentalists say the coal plant could damage extensive coral reef systems, pollute water supplies, open rainforests to mining, and contribute to global climate change, undercutting Sabah’s image as a ‘green’ destination. The federal government contends that the coal plant is necessary to fix Sabah’s energy problems. However, a recent energy audit by the Renewable and Appropriate Energy Laboratory (RAEL) at the University of California Berkeley shows that pollution-intensive coal doesn’t have to be in Sabah’s future.

“We found that energy efficiency, biofuels, hydropower, and geothermal provide immediate advantages for the region over fossil fuels, and that in time both solar and ocean energy could provide even more energy than coal, while building jobs and a clean environment,” Professor Daniel Kammen, head of the energy analysis and director of RAEL, told mongabay.com.

Commissioned by Green SURF (Sabah Unite to Re-power the Future), a coalition of NGOs that oppose the planned 300 megawatt coal plant, Kammen examined Sabah’s energy options, including traditional fossil fuels, biomass waste, hydropower, solar, wind, and geothermal. The analysis also looked at the cost of each of these options to consumers, taking into consideration that an independent energy producer would require a certain return on their investment.

The study found that using biomass waste from Sabah’s extensive oil palm plantations could provide a significant boost in energy to the state while being cost competitive with coal. This solution would also deal with a waste-disposal problem for the oil palm plantations.

“The large scale of palm oil, and other biomasses means that this ‘waste’ is a huge resource,” says Kammen, though he also stresses that oil palm plantations are not without their own environmental problems.

“The challenge is not the technology, but in managing a wider issue, the growth in palm oil estates that have their own significant negative impacts on the region, despite their economic benefits,”

Using 2008 data from the palm oil industry, Kamman’s report found that by 2020 oil palm waste could provide a staggering 700 megawatts. Four hundred megawatts (a hundred more than the planned coal plant) would be achievable under a proposed 4-year-program.

Hydropower was also found to be a cost-competitive with coal and more environmentally friendly, while geothermal was found to be only slightly more expensive than coal. A location has already been identified on the east coast of Sabah for a 67 megawatt geothermal power plant. Yet, Kammen, adds that Sabah shouldn’t rule out solar energy.

“Solar energy is a far better, but a bit longer-term resource, than is widely appreciated today,” he says.

The cheapest way forward is to pursue reduction in energy demand overall notes the analysis.

Despite the many environmental problems known to accompany coal power, the coal plant is being pushed both by the federal Tenaga Nasional Berhad and the state energy company, Sabah Electricity Sdn. Bhd.

Opposition from locals has forced the coal plant to move its location—twice. Now, the plan is to build it on Sabah’s east coast, directly on top of the Coral Triangle, an area known for astounding marine biodiversity. In addition, conservationists fear the coal plant’s transmissions will cut through some of the region’s last intact rainforest in Tabin Wildlife Reserve, home to a number of endangered species including the Bornean orangutan and the Sumatran rhino.

Environmentalists also warn that sulfur dioxide emissions from burning the coal could trigger acid rain that would impact nearby rainforests and agriculture. In addition, discharge of chlorine sulfates into the ocean would boost the likelihood of regional eutrophication and algal blooms, resulting in massive marine die-off. Currently, the area is home to many fishermen who depend on the oceans for their livelihood.

Locals have said that they fear the coal plant will turn the east coast of Sabah into America’s coal states, where water pollution, air pollution, coal ash dumps, deforestation, and destructive mining have devastated the local environment and wildlife. They point to the coal ash spill in Tennessee in 2008 as an example of what they don’t want to become.

“The environmental problems of [the planned coal project] are only the beginning,” says Kammen. “The renewable energy resources in Sabah could lead to a path that invests in the people and sustaining the land, and not in expanding the dependence of the region on imported, dirty, coal.”

At Copenhagen last December, the Prime Minister of Malaysia, Datuk Seri Najib Razak, pledged a 40 percent cut in carbon dioxide intensity by 2020. By moving forward on coal energy, Malaysia would make meeting this goal even more difficult, since coal is the most carbon intensive of the fossil fuels.

Kammen says that the choice between coal and renewable energy doesn’t have to be an either/or choice: either cheap or expensive, either job-creation or job-loss.

“The people of Sabah are keenly aware of the need for jobs, and of their incredible natural resource base. Renewable energy supports that positive development, and a coal project in the region fights that positive, clean, growth,” he says.

Sabah, its people, and its policymakers are facing a decision similar to many places of the world: how do we move ahead on energy? Kammen says that if Sabah chooses renewable energy over traditional fossil fuels it could help spark a clean energy revolution.

“That economies in all parts of the world can look carefully at their resources, develop partnerships, and build a clean energy, job creating path, that protects the natural legacy of each state and province, and our shared global legacy to leave the world a better place for our children than we found it. So far, our society, globally, has not lived up to that charge,” he explains, adding that “Sabah can take a stand, profit from the choice, and chart a new path.”

To facilitate this ‘new path’, a forum is being held on Friday, March 20th to discuss energy production in Sabah and allow the public to air their views. Green SURF, the Sabah Electricty Sdn Bhd (SESB), and the Malaysian Palm Oil Board (MPOD) will be in attendance. 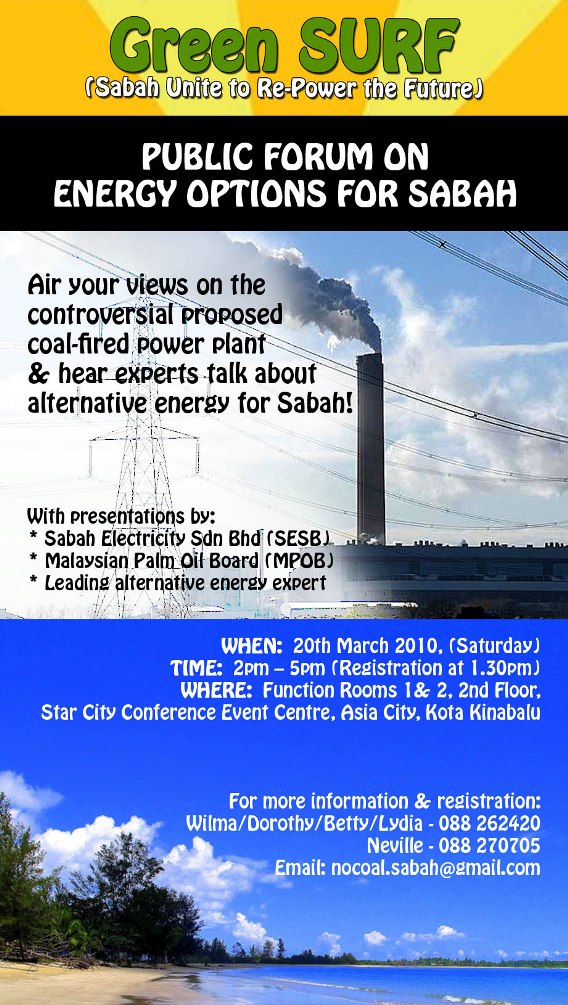 (03/02/2010) New images released by NASA reveal the conversion of mountains and forests in southern West Virginia to a giant surface mine.

Malaysia and China agree to $11 billion deal to build mines, dams in Borneo

(01/13/2010) Malaysia and China today agreed to am $11 billion deal that will turn a vast area of Sarawak, a Malaysian state in northern Borneo, into an industrial corridor for mining and energy development, reports The Financial Times.

(09/21/2009) During the fiscal years of 2002-2008 the United States handed out subsidies to fossil fuel industries to a tune of 72 billion dollars, while renewable energy subsidies, during the same period, reached 29 billion dollars.

(07/30/2009) The U.S. coal sector will need to cut production 50 million tons this year due to falling demand, reports The Wall Street Journal. The cuts come in addition to even larger reductions earlier in the year.

(07/29/2009) A plan to release orangutans in a 250,000-hectare (618,000-acre) tract of forest in the Heart of Borneo has been disrupted by uncertainty around BHP Billiton’s decision to pull out of a coal mining project in Kalimantan, the Indonesian part of Borneo, reports the Independent and conservation groups familiar with the situation. BHP Billiton had provided funds to help establish the forest reserve in Central Kalimantan and offered conservationists mapping support and use of helicopters to deposit orangutans into otherwise inaccessible areas. The two-year program would have reintroduced scores of orangutans but the first scheduled airlift of 48 orangutans for July 20 was canceled after BHP warned it could no longer guarantee the safety of reintroduced orangutans.

(07/30/2009) The U.S. coal sector will need to cut production 50 million tons this year due to falling demand, reports The Wall Street Journal. The cuts come in addition to even larger reductions earlier in the year.

Will ‘peak oil’ spur expanded coal use? And what does it mean for climate?

(12/19/2008) The world must phase out emissions from coal by 2030 to avert dangerous climate change, said scientists speaking at the annual meeting of the American Geophysical Union in San Francisco.

(12/19/2008) Governments have greatly overestimated global coal reserves according to estimates presented by a geologist at the annual meeting of the American Geophysical Union in San Francisco.

(09/28/2008) Former Vice President and Nobel Prize winner, Al Gore, told the audience at the Clinton Global Initiative that the moment had arrived for civil disobedience against new coal plants.

(09/26/2008) Atmospheric carbon dioxide levels rose at a record clip in 2007, according to the Global Carbon Project’s annual overview of the greenhouse gas.

(08/18/2008) Coal burning is contaminating the Arctic, and may be affecting human health and polar ecosystems, warn scientists writing in the online early edition of the Proceedings of the National Academy of Sciences.

(04/14/2008) Malaysia has rejected a $408 million coal-fired power plant near a protected rainforest area in Sabah, on the island of Borneo.