The secret life of a Californian pest

The acorn woodpecker is best known for its chortle, which may have inspired Woody the Woodpecker’s iconic laugh.

But many California residents say there’s nothing funny about the hundreds of holes these birds leave outside of homes and businesses while storing acorns for the winter.

In early 2009, two housing associations in the retirement community of Rossmoor found themselves at the heart of a national scandal after obtaining a depredation permit to shoot the winged vandals, according to the Los Angeles Times.

But researchers on the Hastings Natural History Reserve in Carmel Valley don’t see acorn woodpeckers as pests. For more than 40 years, biologists here have studied the ecological soap operas underlying acorn woodpecker social groups to learn why animals choose to cooperate in some situations and not in others. 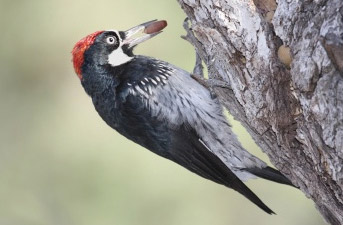 “Understanding the choices that birds face and quantifying those decisions has been an integral part of our work,” said Eric Walters, a researcher with Cornell University’s Laboratory of Ornithology.

But acorn woodpeckers are valuable to ecology beyond these social curiosities. Oak woodlands throughout California are dwindling, even in protected areas, and biologists don’t know why. These oak woodlands are home to a wide array of birds, ants, deer and other forest critters. But acorn woodpeckers are one of the oak’s most codependent attachés and they may be the warning flare for what’s to come, Walters said.

The Hastings Reserve, part of the University of California Museum of Vertebrate Zoology and California’s Natural Reserve system, sits an hour’s drive east of Monterey, past yellow cattle-grazing pastures and high-end vineyards. Since 1937, this 2500-acre island of minimally disturbed land has attracted biologists from across the world studying native Californian plant and animal species.

Its star has been the acorn woodpecker. This clown of the bird world wears a jaunty red cap and black eyepatches, and it has a nervous energy obvious from fifty yards away. It monomaniacally lives to pursue acorns, which it hoards in obsessively maintained holes bored into tree bark.

Acorn woodpeckers reside in colonies of up to seven males and three females that breed simultaneously. Several “helper” males and females assist these “breeders” in a variety of tasks, including acorn storage, territory defense and chick care. While helpers can breed, they don’t.

Biologists have long been enthralled with how such scandalous societies keep from falling apart. Researchers at the Hastings Reserve have found that acorn woodpeckers walk a fine line between individual and family living, Walters said.

Male breeders are almost always related, either brother or father-son teams. The same is true for female breeders. Family rivalry abounds. Males jostle and peck each other over mating opportunities, and females cavalierly toss their sister’s eggs from nests to crack on the ground or even gobble them up, Walters said. But, like many social species, acorn woodpeckers prefer to cooperate with relatives rather than with strangers.

“One of the interesting findings is the trade-off between selfish behavior and helping kin,” Walters said. “Joint-nesting females both kill their relatives by egg tossing but feed their kin’s offspring once the eggs are laid.”

Helper birds are part of the happy family too–usually offspring from previous years. If they’re lucky, helpers will find a nearby group with an opening for breeders of a particular sex, but such vacancies are few and far between. Many helpers opt to stick it out with mom and dad for five or more years, Walters said, rather than chance it alone in a tough world. This patience often pays off. Like British royalty, helpers may inherit territories from deceased parents, he said.

But future heirs may find these oak territories lacking–oaks by-and-large aren’t doing so well in California. In many cases, young trees haven’t replaced dying old ones as fast as they should, Walters said. Biologists thought this “regeneration” problem was the result of cattle grazing. In places like the Hastings Reserve, however, which hasn’t seen a cow for decades, oaks haven’t made a triumphant return.

“As we address the conservation conundrum regarding the lack of regeneration in valley and blue oaks, pressure increases to find a solution before many of the majestic old growth oaks that dot our landscape are gone forever,” Walters said.

Researchers at Hasting are keeping a watchful eye on acorn woodpeckers because their populations and behavior shine a spotlight on oak successes and failures.

“As we race to find a conservation solution, we continue to learn more about the reliance of acorn woodpeckers on the oak woodland and the role they play for other cavity-nesting species found within oak woodlands,” he said.

Some Acorn woodpeckers living in Arizona, for instance, differ drastically from their California cohorts. They migrate in the winter and don’t form social groups. While they munch on acorns, they don’t store them in big granaries like in California, Walters said.

Researchers think this gulf in social behavior stems from differences in oak diversity: Birds in New Mexico have two common species of oak to nab acorns from, while those in the Golden State often have up to five. More types of oaks means a more consistent supply of food. If valley oaks, for instance, run into trouble and can’t produce enough acorns for hungry birds, blue oaks can pick up the slack.

Such off-years are par for the course in oak populations. Acorn crops ebb and flow in cycles. A season with slim pickings may be followed by a season of plenty, a so-called “mast” year.

Biologists can only estimate the impacts of total oak collapse on acorn woodpeckers and their feathered friends. Researchers at Hastings modeled the disappearance of a single oak species–the coast live oak–from, in this case, sudden oak death and the resulting effects on a number of bird species. The simulated loss cut acorn woodpecker, Nutall’s woodpecker and oak titmouse populations by more than half in the coast live oak range and between 4 and 10 percent statewide.

Natural populations don’t give up their secrets easily–it takes patience and time to tease them out, especially for organisms with glacial lifespans like oaks. It can take years to unravel how humans are affecting certain ecosystems, Walters said. The acorn woodpecker study is so important, he said, because it has been around for so many years. Sites like the Hastings Reserve give ecologists a space to conduct such long-term investigations.

“By having Hastings protected and under the umbrella of UC Berkeley,” Walters said, “the field site will be a place for researchers to come for years into the future.”

Seeing the forest for the test-tube trees

(01/15/2010) Paper manufacturers and environmentalists seem to be reliving Robert Frost’s age-old dilemma caused by two roads diverging in the woods. Proponents of genetically engineered trees say the road they’ve chosen will lead to trees capable of weathering freezing temperatures and disease — trees that can grow more efficiently on less land and possibly serve as a cheap source of biofuel. In addition, supporters say, genetic engineering holds the possibility of bringing some trees back from the brink of extinction. But critics in the environmental community say the path chosen by the paper industry won’t save a single forest from the chainsaw. They fear that test-tube trees may become invasive, destroying the forests they’re meant to protect.