Even megafauna can be quickly forgotten: the baiji and shifting baselines

In 2006 a survey in China to locate the endangered Yangtze River dolphin, known as the baiji, found no evidence of its survival. Despondent, researchers declared that the baiji was likely extinct. Four years later and the large charismatic aquatic mammal is not only ‘likely extinct’, but in danger of being forgotten, according to a surprising new study “Rapidly Shifting Baselines in Yangtze Fishing Communities and Local Memory of Extinct Species” in Conservation Biology.

Lead author of the study, Dr. Samuel Turvey, was a member of the original expedition in 2006. He returned to the Yangtze in 2008 to interview locals about their knowledge of the baiji and other vanishing megafauna in the river, including the Chinese paddlefish, one of the world’s largest freshwater fish. In these interviews Turvey and his team found clear evidence of ‘shifting baselines’: where humans lose track of even large changes to their environment, such as the loss of a top predator like the baiji.

“‘Shifting baseline syndrome’ is a social phenomenon whereby communities can forget about changes to the state of the environment during the recent past, if older community members don’t talk to younger people about different species or ecological conditions that used to occur in their local region,” Turvey explains. “These shifts in community perception typically mean that the true level of human impact on the environment is underestimated, or even not appreciated at all, since the original environmental ‘baseline’ has been forgotten.”

In other words, a community today may see an ecosystem as ‘pristine’ or ‘complete’, which their grandparents would view as hopelessly degraded. In turn what the current generation sees as a degraded environment, the next generation will see as ‘natural’. The shifting baseline theory is relatively new—first appearing in 1995—and so it has not been widely examined in the field.

Turvey and his team felt that the Yangtze River, one of the world’s most degraded freshwater habitats, would provide a more-than-suitable place to test the theory in the field. But even they were surprised by the extent to which once-important species were forgotten.

“Our data from the Yangtze shows that, in certain cultural environments at least, local communities will immediately start to forget about the existence of even large, charismatic species as soon as these species stop being encountered on a fairly regular basis,” explains Turvey.

The team interviewed 599 participants ranging from 22 to 90. While the majority of participants had heard of the baiji (89.7 percent) and the Chinese paddlefish (66.2 percent), the researchers found that the one thing that linked those who had never heard of the species was youth.

“Younger informants were less likely to know what either species was, despite being prompted with photographic cue cards, appropriate local names, and verbal descriptions,” the authors write. For example, over 70 percent of participants who had begun fishing after 1996 had never even heard of a Chinese paddlefish and 23 percent of these had not heard of the baiji.

“Often we would interview old fishermen who regaled us with stories about the best way to catch paddlefish with long-lines, or told us recipes about how to cook a baiji and what it tasted like, and then we would talk to a 30- or 40-year old fisherman sitting a couple of meters away in the same fishing village who had absolutely no idea what these species were or what we were talking about,” Turvey told mongabay.com, adding that, “it is particularly surprising because paddlefish (the largest freshwater fish in the world!) used to be culturally and economically important until the 1980s, and the baiji was the focus of myths and legends across the Yangtze region.”

Turvey believes their findings have large significance for conservation efforts in China and beyond.

The study shows that “although local ecological knowledge is a highly important source of information for making conservation decisions and recommendations, there are also major problems with relying solely on information provided by local people when trying to reconstruct past changes to the environment,” he says.

However, he also pointed out a possible upside to the research: “if communities forget about vanishing species very quickly, then maybe our findings could also suggest that reports of supposedly extinct species might turn out to be true.”

The other Yangtze victim: the Chinese paddlefish

It has been pretty well established that the baiji is extinct. Even if a few individuals survive it is highly unlikely that under current conditions in the river—massive dams, susceptibility to bycatch, illegal electric-fishing, pollution, collisions with ships—they could persist in the longterm .

Less is known about the state of one of the Yangtze river’s other big inhabitants: the Chinese paddlefish. The massive fish has not been the target of conservation efforts or publicity campaigns like the baiji, despite its importance to local fishermen as a food source. The Chinese paddlefish wasn’t only important regionally, but globally as it is considered by many to be the world’s largest freshwater fish with some individuals recorded at seven meters long.

The Chinese paddlefish began to decline precipitously in the 1970s due to overfishing; the construction of several major dams added to its problems, and in the 1980s the population collapsed. While the International Union for the Conservation of Nature (IUCN) hasn’t evaluated the Chinese paddlefish population since 1996, a recent local survey failed to find a single individual. Some now believe the species, like the baiji, is either extinct or very soon will be.

“I have to say that sadly I don’t hold out much hope for the survival of the paddlefish, even in the short-term,” explains Turvey. “Although it’s possible that there might still be a tiny remnant population of paddlefish left in the Yangtze, any survivors downstream of the Gezhouba and Three Gorges dams are cut off from their spawning grounds, so they cannot reproduce. Fishing efforts and the wider-scale industrialization of the Yangtze are also continuing to intensify, in particular through an increase in destructive electro-fishing.”

Turvey says that the world has let that species go without even a whimper.

“It must also be recognized that, shamefully, there has been extremely little conservation interest ever paid to this magnificent species; at least the baiji was the focus of a lot of conservation discussion, whereas the plight of the paddlefish didn’t even receive that level of recognition.”

This fact alone probably explains why the Chinese paddlefish has been forgotten even quicker than the baiji.

The future of the Yangtze ecosystem: or is there one?

Considering that the Yangtze river ecosystem may have lost two key species in less than a decade and possesses a high number of Critically Endangered species according to the IUCN —the Chinese alligator, the Yangtze sturgeon, and Yangtze soft-shell turtle—one has to ask: is this ecosystem beyond repair?

“The Yangtze ecosystem—a vast river drainage once home to hundreds of unique endemic species—is now undeniably one of the world’s most damaged, degraded habitats, and it is extremely depressing to try to carry out conservation projects there,” says Turvey. “The problem is especially acute because the region continues to experience tremendous industrial development associated with China’s escalating economic growth, and it is also home to a huge number of low-income communities that depend upon the river for resources and livelihoods.”

One year after the baiji was declared likely extinct, a report by China’s official State Environmental Protection Administration (SEPA) found that 30 percent of the Yangtze river’s tributaries are “seriously polluted” while 600 kilometers of the river’s water is in “critical condition”. Yet, development continues: China is currently proposing building another dam on the river, which according to researchers would impact the river’s only fish reserve and one of the last places where the Chinese paddlefish is thought to survive.

The degradation of the river and the loss of species has also impacted the region’s fishermen. In their survey, Turvey and his team found that over 90 percent of the fishermen didn’t want their children to become fishermen. Important commercial species, such as Reeves’ shad and the Yangtze pufferfish, have both undergone population collapses. According to SEPA the river’s annual harvest of fish has dropped 77 percent from the 1950s to the 1990s, leaving fishermen struggling to make a living and resorting to more drastic methods, such as electro-fishing.

“Under such conditions, it is often hard to see how conservation successes can be achieved—is it just a case of banging your head against a wall as you watch species slide irreversibly towards extinction? But how can we allow ourselves to ignore this kind of environmental problem?” asks Turvey.

Currently the Yangtze finless porpoise, a freshwater subspecies of the finless porpoise, is estimated to have a population of no more than 2,000 individuals. The Chinese alligator is on the brink in the wild, but survives in captivity. The Yangtze soft-shell turtle, which may also be the world’s largest, could already be gone from the Yangtze, although a wild individual was recently found in Vietnam. Researchers are trying to breed two of the last captive turtles, but one of the turtles is over 80, and the other over 100. Turvey says that for species like these, captive breeding is likely to be the only way to save them in the long-run, although as the turtles’ prove even captive breeding may fail.

“As for many of the Yangtze’s other threatened species, unfortunately very little is still known even about their status or necessary conservation measures,” Turvey says. For example, the Critically Endangered Yangtze sturgeon hasn’t been assessed by the IUCN for over a decade.

In the end ‘shifting baselines’ appears to mean that not only a single species will be lost and forgotten, but an entire ecosystem.

For more information: see an essay Dr. Samuel Turvey wrote for the BBC Green Room on his research. 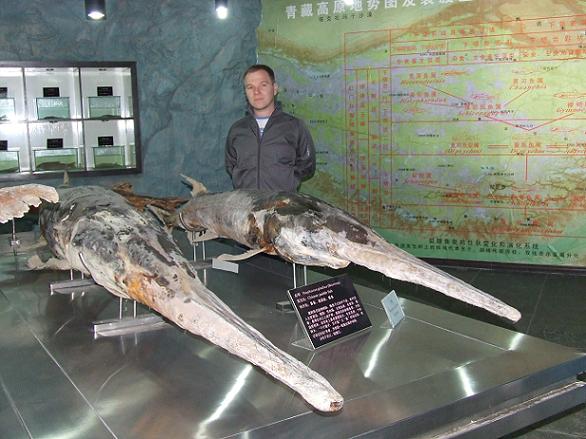 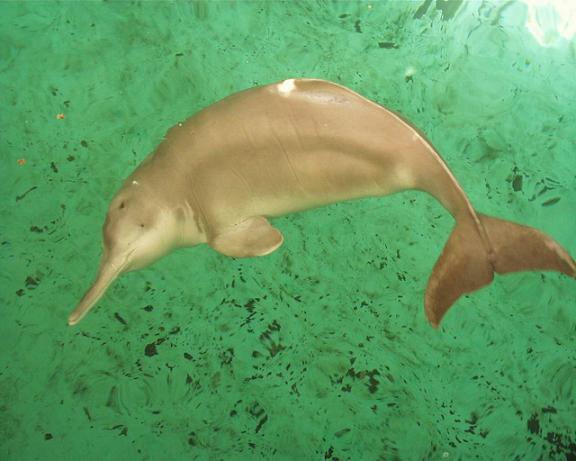 The baiji. Photo by: Wang Ding.