The US Geological Survey (USGS) has found that every ice front in the southern part of the Antarctic Peninsula—the coldest part—has been retreating overall for the past sixty years with the greatest changes visible since 1990.

“This research is part of a larger ongoing USGS project that is for the first time studying the entire Antarctic coastline in detail, and this is important because the Antarctic ice sheet contains 91 percent of Earth’s glacier ice,” said USGS scientist Jane Ferrigno. “The loss of ice shelves is evidence of the effects of global warming. We need to be alert and continually understand and observe how our climate system is changing.”

The melting of ice shelves won’t directly lead to sea level rise, since ice shelves already rest in the ocean. However, the loss of the shelves will allow melt from the terrestrial Antarctic ice sheet to reach the ocean and eventually raise sea levels threatening islands, low-lying areas, and coastal communities and cities. If all the land-based ice in Antarctica melted, researchers estimate that sea-levels would rise by over 213-240 feet (60-73 meters).

Previously the USGS documented that the majority of ice fronts on the Antarctic Peninsula have retreated during the late 20th Century and early 21st Century. 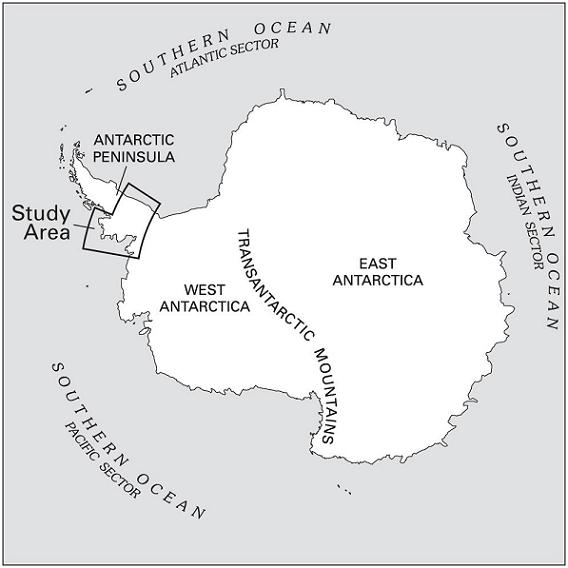 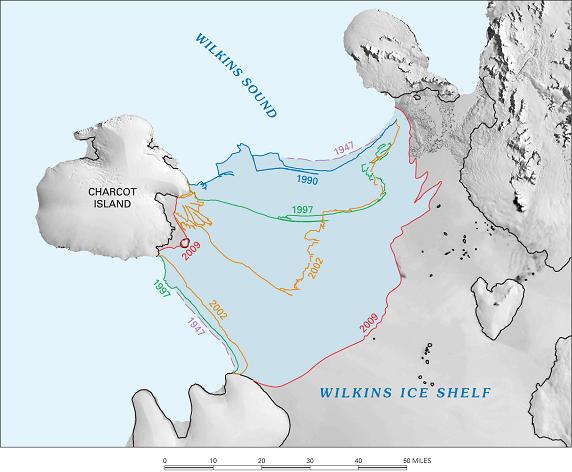 This image shows ice-front retreat in part of the southern Antarctic Peninsula from 1947 to 2009. USGS scientists are studying coastal and glacier change along the entire Antarctic coastline. The southern portion of the Antarctic Peninsula is one area studied as part of this project, and is summarized in the USGS report, “Coastal-Change and Glaciological Map of the Palmer Land Area, Antarctica: 1947—2009” (map I—2600—C). Image courtesy of: U.S. Geological Survey

(02/03/2010) Newly released images from NASA and the National Snow and Ice Data Center show that the Arctic’s melt season has lengthened significantly over the past few decades.

(01/14/2010) A new study shows that a major Antarctic glacier has likely passed its tipping point, putting it on track to lose 50 percent of its ice in 100 years. Such a loss is estimated to raise global sea levels by 24 centimeters (9.4 inches), according to the study published in the Proceedings of Royal Society A.

(12/17/2009) Allowing the climate to rise by just two degrees Celsius—the target most industrialized nations are currently discussing in Copenhagen—may still lead to a catastrophic sea level rise of six to nine meters, according to a new study in Nature. While this rise in sea levels would take hundreds of years to fully occur, inaction this century could lock the world into this fate.