World of Avatar: in real life

Commentary by Jeremy Hance on 13 January 2010

Spoiler Alert: article reveals the plot of the film Avatar.

A number of media outlets are reporting a new type of depression: you could call it the Avatar blues. Some people seeing the new blockbuster film report becoming depressed afterwards because the world of Avatar, sporting six-legged creatures, flying lizards, and glowing organisms, is not real. Yet, to director James Cameron’s credit, the alien world of Pandora is based on our own biological paradise—Earth. The wonders of Avatar are all around us, you just have to know where to look.

There’s the obvious examples: the horse-like ‘direhorses’ that the indigenous Na’vi ride, the rhino-hammerhead combination ‘titanothere’, and the big-cat influence ‘thanator’ that chases the hero (and is later ridden by a Na’vi). While other connections to Earth biology may be less clear, they are no less real.

Six legs: A number of Pandora’s species sport six legs instead of four. While this may seem fantastical, most of Earth’s legged species walk on all sixes rather than all fours: all insects and arthropods are hexapodal or six-legged. It turns out hexapodalism is as common here as on Pandora—only the hexapods here are small.

Bioluminescence : One of the aspects of Avatar‘s visual beauty is that many of the organisms literally glow with their own inner light. But this isn’t science fiction; innumerable organisms on Earth have evolved this glowing light, known as bioluminescence.

But it is in the deep dark of the oceans where bioluminescence has taken over in a way not dissimilar from Pandroa. Nearly all species in the abyss—from fish to squid to crustaceans to corals—employ amazing light shows to communicate, attract prey, or escape. Think the lightning flashes in Avatar are too good to be true, scientists have even recently discovered marine worms that throw bioluminescent bombs.

Flying lizards: In the film the Na’vi ride on large flying lizard-like creatures with wings. These animals are clearly inspired by flying dinosaurs such as psteasaurs, but also include inspiration from a number of living organisms including manta rays and skates. But there are also flying lizards still walking around the world today. In Asia lizards evolved wing flaps that allow them to glide from tree to tree. But that’s not all: on the island of Borneo frogs, squirrels and snakes all glide. Yes, that’s right, even snakes throw themselves off of trees and then spread out skin membranes like a parachutes to glide safely to ground. Often Earthly evolution is even stranger and more incredible than science fiction.

The spectacular colors on the flying lizards are also based on natural organisms, including butterflies, poison arrow dart frogs, and tropical fish.

Rainforest: The flora on Pandora is Earth-like, not surprising then that it was largely designed by a Californian botanist.

Besides recognizable trees, moss, and ferns, one of the stranger flora species on Pandora collapses in on itself when contacted: this is not alien behavior, on Earth some plants have adapted a defense mechanism that allows them to curl in on themselves when touched, known as thigmonastic movements, protecting them from plant-eaters. Tiny aquatic worms that resemble plants, nicknamed feather dusters, display the same behavior.

Even the most unique behavior on Pandora, plants communicating to each other, is based at least in part on reality. Signal transduction, a field of study that only took off in the late 1970s, studies how plants communicate—both to other plants and within their various parts—through molecular signaling. Recent studies have shown that plants are actually able to distinguish between family-members (those that share the same parent plant) and strangers and treat these two groups different. Plants are even considered by many to have a form of memory and intelligence through their signal transduction capabilities.

Perhaps the most stunning visuals of Pandora involve its untouched rainforest spreading as far as the eye can see. There are many places on Earth where rainforest still exists largely untouched, but such places are increasingly under threat—as are the people who live there.

Although science fiction, Avatar very much points to contemporary situations where rainforest people are battling in their own ways international corporations invading their land to mine, log, and drill.

If anything a movie like Avatar should drive one to learn about our own planet’s miraculous and beautiful organisms—and help save them. If you are unable to travel to see some of these wonders themselves pick up some nature books or check out great documentaries like Planet Earth, Blue Planet, or anything by David Attenborough; he even has a remarkable series called Life of Plants.

If you don’t believe me take it from Cameron himself: “there are creatures right on Earth that are absolutely amazing, and all the aliens are already here, if you look at a small-enough scale or you look under the ocean… It’s just an overall kind of reverence and sense of wonder for nature and its inventiveness, and that really imbued every decision we made in terms of the creature design.” 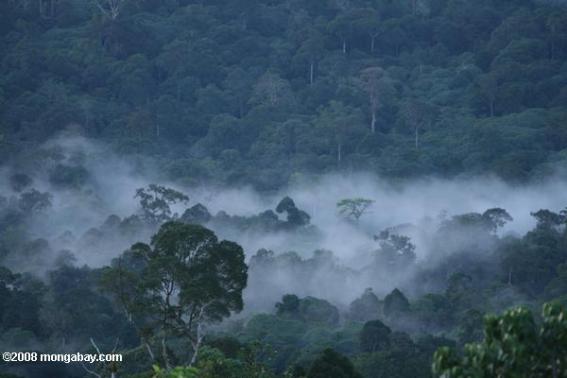 Mist rising from rainforest on Borneo. Photo by: Rhett A. Butler.

The real Avatar story: indigenous people fight to save their forest homes from corporate exploitation

(12/22/2009) In James Cameron’s newest film Avatar an alien tribe on a distant planet fights to save their forest home from human invaders bent on mining the planet. The mining company has brought in ex-marines for ‘security’ and will stop at nothing, not even genocide, to secure profits for its shareholders. While Cameron’s film takes place on a planet sporting six-legged rhinos and massive flying lizards, the struggle between corporations and indigenous people is hardly science fiction.

Videos and Photos: over 17,000 species discovered in waters beyond the sun’s reach

(11/23/2009) Deep, deep below the ocean’s surface, in a world of ever-present darkness, one would expect few, if any, species would thrive. However, recent expeditions by the Census of Marine Life (CoML) have found an incredible array of strange, diverse, and amazing creatures. To date a total of 17,650 species are now known to live in frigid, nearly lightless waters beyond the photic zone—where enough light occurs for photosynthesis—approximately 200 meters deep. Nearly 6,000 of these occur in even harsher ecosystems, below depths of 1,000 meters or 0.62 miles down.

(10/16/2009) People like to say ‘blood is thicker than water’. But plants may actually treat ther siblings better than many of us: although lacking in blood, scientists have found that plants not only recognize family, but respect their space.

(09/07/2009) A five week expedition into a remote extinct volcano has uncovered a treasure trove of new species in Papua New Guinea, including what may be the world’s largest rat, a fanged frog, and a grunting fish. In all the expedition estimates it may have found around forty species unknown to science. The expedition was undertaken by a BBC film crew and scientists in January. Local trackers led them into the unexplored jungle, hidden beneath the Bosavi volcano’s 2,800 meter summit. Six months prior to arrival, fields of spinach and sweet potato were planted to feed the expedition in such a remote area.

(09/01/2009) There are few places in the world more remote, more dangerous, and more unexplored than underwater caves. Cave diving—exploring these unknown abysses—has yielded many strange species unknown to science. A recent expedition to an underwater cave on Lanzarote, one of the Canary Islands, was no exception. Researchers discovered two species of worm smaller than a grain of rice and a primitive poisonous crustacean.

(08/20/2009) Researchers from Scripps Institution of Oceanography at UC San Diego have announced in Science the discovery of seven new species of deep sea worms, five of which drop orb-like parts of their body which cause a brilliant green display of bioluminescence. For this reason researchers have nicknamed them the ‘green bombers’. The worms are not just new species, but a clade of animals entirely unknown to science until now.

(11/09/2008) The evolutionary origin of deep sea octopuses, new species populating an underwater “continent”, 12,000 amphipods crowding a square meter in the Gulf of Mexico, massive gatherings of white sharks in the middle of the Pacific: these are just a few highlights from the Census of Marine Life (COML)’s fourth report.