For decades industrialized nations have measured their success by the size of their annual GDP (Gross Domestic Product), i.e. economic growth. The current economic model calls for unending growth—as well as ever-rising consumerism—just to remain stable. However, a new report by the New Economics Foundation (nef) states that if countries continue down a path of unending growth, the world will be unable to tackle climate change and other environmental issues.

“We tend to think of growth as natural for economies, forgetting that in nature things grow only until maturity and then develop in other ways. […]” says Andrew Simms, co-author of the report and nef policy director. “Endless growth is pushing the planet’s biosphere beyond its safe limits. The price is seen in compromised world food security, climatic upheaval, economic instability and threats to social welfare. We urgently need to change our economy to live within its environmental budget.”

For example, if global growth is set at 3 percent (low for most developing countries), the report states that the global economy would need to reduce its carbon intensity (emissions relative to GDP) by 71 percent by 2050, a 2.7 percent drop every year. However, even such a drastic decline in carbon intensity would still result in carbon dioxide levels of 500 parts per million (ppm), an amount that new research shows would still likely push temperature far above 2 degrees Celsius (3.6 degrees Fahrenheit).

A number of scientists and environmental organization are pushing for a more ambitious goal of setting carbon emissions at 350 ppm by 2050. But according to nef if the world still wants to retain 3 percent economic growth annually and shrink levels to 350 ppm, this would require a 95 percent drop in carbon intensity in the next forty years—an unprecedented 6.3 percent drop per year. To achieve this, the report states, that carbon intensity would need to improve 200-fold relative to the little improvement in carbon intensity achieved from 2000-2007.

“The latest climate science shows that we are already terribly close to being committed to crossing the 2 degrees Celsius threshold. This means if there is to be any chance of avoiding this rise there needs to be a ‘crash’ reduction in greenhouse gases, specifically CO2,” said Dr Victoria Johnson, co-author of the report and lead researcher of the climate change and energy program. “The easiest way to achieve this is for a rapid phase-in of energy demand reduction in developed nations—who, on average, are consuming excessively the world’s fossil fuels and other natural resources.”

Johnson also warns governments should not to focus on supposedly ‘magic bullets’, such as carbon capture and storage, bio-fuels, nuclear power, or geo-engineering schemes, which she terms “dangerous distractions from more human-scale solutions”.

The report states that climate change is not the only environmental threshold threatened by the pursuit of endless economic growth; others include biodiversity loss, freshwater availability, the ozone layer, pollution, ocean acidification, and land use.

Aligning the global economy with environmental thresholds—creating a ‘steady state’ economy, also known as ‘dynamic equilibrium’—will actually create a more socially equitable and happier society, according to the report.

The organization, nef, has looked at what a sustainable economy would like look in other reports, such as The National Accounts of Well-Being, The Happy Planet 2.0, and The Great Transition. 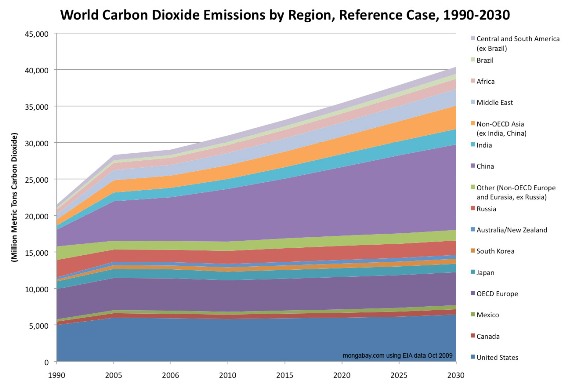 According to the Energy Information Administration, after China and the United States, among major polluters only India is expected to have significant growth of emissions over the next 20 years.

(12/18/2009) The President of Bolivia, Evo Morales, clearly frustrated with the progression of talks at the Climate Change Conference in Copenhagen, today blamed capitalism for global warming.

(12/15/2009) Pope Benedict XVI has released a message linking world peace with preserving the environment for the World Day of Peace, which will be held on January 1st 2010. In it Benedict calls for a “long-term review” of the world’s current economic model, including “[moving] beyond a purely consumerist mentality” and encouraging a more “sober lifestyle”.

US think-tank: islands affected by global warming should wait for trickle-down money

(12/09/2009) Poor island nations threatened by rising seas should wait for money through trickle-down economics, according to the founder of the US Competitive Enterprise Institute. The Washington-based free-market think tank believes that curbing greenhouse gas emissionss to combat climate change will be too costly to the US and global economies.