Few species receive less respect and less conservation attention than insects. This despite the fact that they are some of the most diverse species on the planet andthey provide a number of essential services to humankind, including pollination, pest control, production (for example honey and silk), waster recycling, and indications of habitat health.

Scientists are not only unsure just how many species of insects are threatened in world; they are equally uncertain how many insects exist. Currently there are nearly a million insect species described by science, but millions more likely exist. It’s probable that innumerable insect species have vanished before even being catalogued by entomologists.

Fortunately, the beautiful emerald dragonfly Maathai’s Longleg Notogomphus maathaiae avoided this fate. Discovered only in 2000 in the forested mountains of Kenya, the dragonfly is named after Nobel Prize winner Wangari Maathai.

Dragonfly expert and one of the discoverers of Maathai’s Longleg, Viola Clausnitzer, describes her find like this: “In Mt Elgon forest, June 06 2000 was a typical morning for that time of the year. The sky was clear in the morning and only becoming cloudy in the afternoon. The day was perfect for collecting dragonflies, an activity I have been involved in for the last 10 years. Least did I know that, that day would be most eventful. After 3 hours in the thickets along streams running down the mountain, I was just about to break off for lunch when by sheer luck my eyes rested on what appeared a strange dragonfly belonging to the Clubtail family. The dragonfly was resting in a sunny spot on twigs of a shrub close to a waterfall of the Rongai River. The single male was patient enough to allow me a closer glimpse and then with a sweep of my large net, I caught the male. Especially the bright green sides of the thorax where unusual and I thought immediately that this might be a new species to science.”

Her thought turned out to be correct: later Clausnitzer discovered a specimen in the Nairobi Museum, but no one had realized it was an undescribed species.

“Kenya is a well studied country—the discovery of a new species (new to
science) was quite astonishing,” Clausnitzer says.

She decided to name the emerald dragonfly after Kenyan activist and conservationist Wangari Maathai. Founder of the Greenbelt Movement, Maathai has linked the importance of conserving natural resources, including forests (such as the dwindling forests where the dragonfly was found), with poverty alleviation.

Maathai was awarded the Nobel Peace Prize for her life’s work the same year as the new shimmering dragonfly was discovered.

Like Maathai, dragonflies are environmental guardians according to Clausnitzer: “With their amphibious habits, dragonflies have proved to be useful indicators of habitat quality above and below the water surface. Industrial effluent, agricultural pesticides, siltation, eutrophication and the clearing of forests in watershed areas affect not only dragonflies, but also our well-being. Water quality is an important issue for large parts of Kenya, since the highlands, where most streams and rivers originate are densely populated. Some species, which where once common in the highlands disappeared already from large areas due to the changes in water quality.”

The dragonfly is listed as Endangered on the IUCN Red List. Currently, being listed is a rarity for insects, but Claunitzer says that more will need to be done to save Maathai’s Longleg than simply acknowledging it is imperilled. Clausnitzer recommends “protection of the remaining forests and reforestation,” along with “general awareness to keep and restore forests in the highlands, especially along waters.” 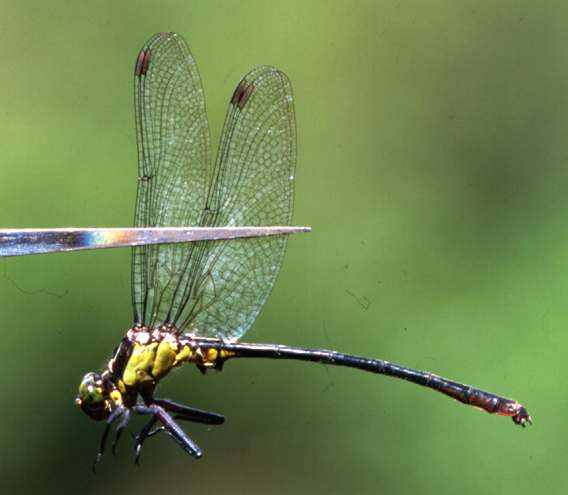 (06/23/2009) A lot of time, effort, and funds have been spent on programs evaluating the threat of extinction to species around the world. Yet insects have not benefited from these programs, which have largely focused on more ‘charismatic’ species such as mammals, birds, amphibians, and reptiles. This gap is clearly shown by the fact that 42 percent of vertebrates have been assessed by the International Union for the Conservation of Nature (IUCN), and only 0.3 percent of invertebrates.