In absence of measures to address consumption, REDD may fail to protect forests

Rising demand for timber and agricultural products could work against a proposed initiative to reduce emissions from deforestation and degradation (REDD), warns a new report from the Environmental Investigation Agency (EIA).

The briefing, Putting the Brakes on Drivers of Forest Destruction: A Shared Responsibility, says that investment in REDD will not be enough to protect forests if the underlying drivers of deforestation — namely consumption — are not addressed. It urges negotiators to re-insert critical text that has been dropped from the working text on REDD ahead of next week’s climate change conferences in Copenhagen.

Conservation begets ‘leakage’ in the absence of governance

In the absence of provisions to encourage responsible consumption by consuming countries, forest conservation in one country may simply displace deforestation to countries where law enforcement is lax due to poor governance, corruption, or lack of environmental standards. EIA hopes that a future climate agreement would force consuming countries to acknowledge, and take responsibility for, their role in driving deforestation.

Numerous studies and reports have shown poor governance in developing countries to be a chief enabler of deforestation. Of the tropical countries with the highest annual loss of forest cover over the past decade, nearly all are plagued by rampant illegal logging. For example, a report released earlier this week by Global Witness said that corruption in Indonesia’s forestry sector logging amounts to $2 billion each year, equivalent to total government spending on health in the country. Meanwhile illicit tree-felling in Brazil, which has lost an area of Amazon forest larger than than Germany over the past twenty years, is also widespread, the result of poor land titling systems, irregular law enforcement, and corruption. Deforestation is both countries is increasing the result of industrial activities driven by consumer demand, rather than poverty-driven subsistence farming.

Given these trends, EIA argues that consumer countries — which drive the market for goods produced through deforestation — bear the ultimate responsibility for cleaning up the forest sector. The group says “indiscriminate” markets are a recipe for continued deforestation and therefore welcomes recent efforts to identify and address how supply chains contribute to forest destruction. Examples include the UK government-backed Forest Footprint Disclosure Project and Aliança da Terra certification program for cattle products and soy in the Amazon. But EIA warns that such schemes must be credible and transparent to be effective.

Consumption-driven deforestation can also be addressed through legal mechanisms like the Lacey Act in the United States and FLEGT in Europe. These regulations puts the burden of responsibility on importing companies, holding them to the environmental laws of producing countries, even when those countries are unwilling or unable to enforce their rules.

EIA further says that consuming countries need to be aware of the impacts their policies may have on tropical forests. The NGO cites recent showing that biofuels mandates by the U.S. and E.U. have been linked to deforestation in Southeast Asia for oil palm plantation and the Amazon for soy and cane expansion. Even the current climate framework is contributing to deforestation — the Kyoto Protocol treats all bioenergy as carbon neutral, no matter whether it is produced in place of carbon-dense tropical rainforests, and completely omits emissions from deforestation.

Looking ahead to Copenhagen, A Shared Responsibility says REDD needs to identify drivers and address them in order to be effective in actually reducing deforestation. Language in any future agreement should therefore simultaneously clamp down on illicit trafficking and nurture the development and emergence of markets for sustainable and responsibility-sourced products with strong chain-of-custody controls. 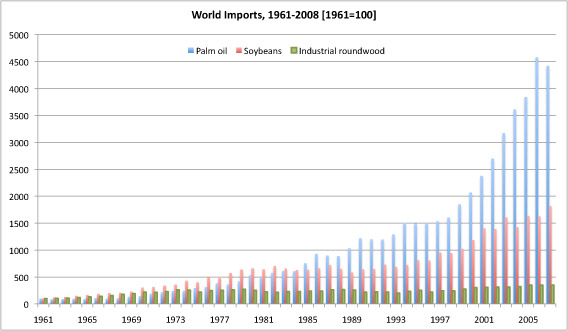 Andrea Johnson, Director of Forest Campaigns for EIA, told mongabay.com the Ecosystems Climate Alliance, a coalition of which EIA is a member, would like to see the following text added to the negotiating text on REDD.


All parties shall support REDD actions by undertaking policies and measures, that identify and address the diverse social and economic drivers of deforestation and forest degradation to relieve the pressures on forests and land that result in greenhouse gas emissions. [within the objectives and scope section]

All parties that consume forest products should implement policies and measures to support the laws and legal frameworks of other sovereign states, to further prevent the conversion or degradation of natural forests.[as safeguards section, to address illegal wood imports and exports]

Several countries — including Tuvalu, United States, Bolivia, Paraguay, and Peru — have voiced support for language that recognizes and addresses demand-side drivers of deforestation, but some important players — most notably the E.U. — have been silent or obstructive on the issue, which has now been cut from the working text on several occasions. 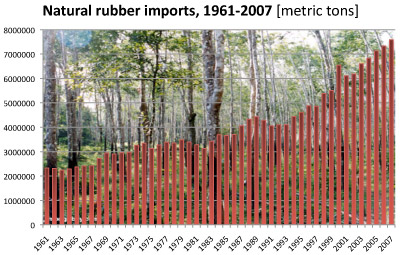 Johnson feels that all countries contributing to deforestation need to contribute to a solution.

“All countries are part of driving forest destruction, and all countries must be party to stopping it,” Johnson explained via email. “All too often REDD readiness efforts are talked about by donors, recipients and NGOs alike as though it were simply a matter of early and massive financing. Obviously, yes, we need to find a way to scale up financial commitments to reducing forest destruction. But we are doomed to repeat the mistakes of the past if we see deforestation as something you can just throw a big pile of money at to make it go away. We’ll continue to throw even more money at illegal timber and oil palm for a long time coming.”

“Consumer and manufacturing countries — both in AND out of Annex I — need to step up to the plate with more than cash, by taking on policies and measures that will reduce their role in driving illegal logging and forest destruction to feed global markets for food, fuel and wood fiber.”

(11/19/2009) Federal agents from the U.S. Fish and Wildlife Service raided Gibson Guitar’s factory Tuesday afternoon, due to concerns that the company had been using illegally harvested wood from Madagascar, reports the Nashville Post.

(11/02/2009) The elimination of a key provision from the negotiating text for the Reducing Emissions from Deforestation and Degradation in developing countries (REDD) mechanism could turn the proposed climate change mitigation scheme into a subsidy for large-scale conversion of natural forests to industrial plantations, warned environmentalists today at the resumption of U.N. climate change negotiations in Barcelona.

(10/28/2009) The illegal wood trade from Myanmar to China has slowed, but it still threatens Myanmar’s tropical forests and species, according to a new report by Global Witness. From 2005 and 2008 improved border controls into China led to a drop in imports of logs and sawn wood by 70 percent.

(10/08/2009) Without safeguards to protect natural forests from conversion to plantations and industrial logging, REDD may fail to deliver promised reductions in emissions, warns a coalition of activist groups.