As a part of a deal with Norway to preserve its rainforests, Guyana will step up oversight of its gold mining industry, which has been accused of causing significant environmental damage including deforestation and mercury and cyanide pollution.

“The recent agreement with Norway, through which Guyana receives payments to avoided deforestation and degradation, now puts a significant monetary and moral cost to any unnecessary degradation of forest areas for any purpose,” reads a statement from the Office of the Prime Minister of Guyana.

As apart of the plan, Guyana will be increasing the number of mine officers across the country. The government is also calling on gold mining operations to become more transparent and to minimize degradation to forests.

A 2007 report by the International Human Rights Clinic (IHRC) of Harvard Law School’s Human Rights Program on Guyana’s gold mining found that the practice—which employs thousands and is one of Guyana’s major exports—causes deforestation, pollution of waterways, and threatens indigenous populations.

“Our observations confirmed that the areas around mines resemble a moonscape of barren, mounded sand and mud,” Bonnie Docherty, clinical instructor at the IHRC, said in 2007. “Since small scale miners typically wash the topsoil away in order to get to the gold-bearing clayey soil underneath, the sites of former mines are quite infertile and incapable of supporting regenerated rainforest.”

Much of Guyana’s gold mining is done by small to medium operators. Some operators fear that proposed environmental regulations will force them out of business.

To protect Guyana’s still largely intact rainforests, Norway has pledged $30 million in 2010 to a REDD+(Reducing Emissions through Deforestation and forest Degradation) fund with the possibility of $250 million by 2015 depending on Guyana’s success. 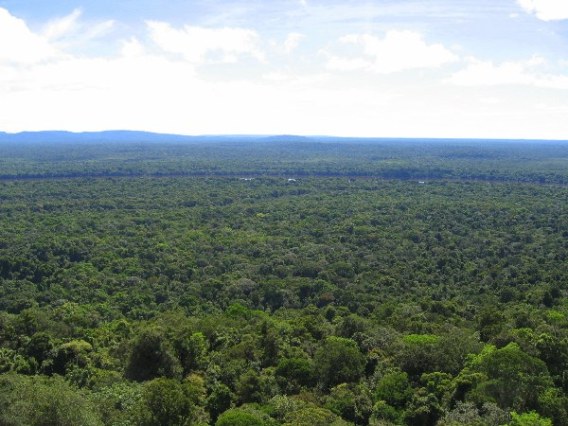 Norway to give Guyana up to $250M for rainforest conservation

(11/09/2009) Norway will provide up to $250 million to Guyana as part of the South American country’s effort to avoid emissions from deforestation.

Norway to pay Guyana to save its rainforests

(02/05/2009) Norway will provide financial support for Guyana’s ambitious plan to conserve its rainforests, reports the Guyana Chronicle. Meeting in Oslo, Norway on Tuesday, Guyana President Bharrat Jagdeo and Norwegian Prime Minister Jens Stoltenberg signed a Memorandum of Understanding agreeing to establish a partnership to reduce greenhouse gas emissions from deforestation and forest degradation (REDD). The leaders will push for the incorporation of a REDD mechanism that includes low deforestation countries like Guyana in a post-2012 climate change agreement.