A powerful forest monitoring application unveiled last week by Google will be made freely available to developing countries as a means to build the capacity to quality for compensation under REDD, a proposed climate change mitigation mechanism that would pay tropical countries for protecting forests, according to a senior Google engineer presenting at a side event at COP15 in Copenhagen.

Speaking at an event organized by Avoided Deforestation Partners, Google’s Brian McClendon demonstrated Google.org’s “Earth Engine”, which leverages technologies developed by Carnegie Institution for Science and IMAZON to rapidly analyze and map forest cover in extremely high resolution in the Amazon. The project has been coordinated and supported by the Gordon and Betty Moore Foundation.

“Traditional forest monitoring is complex and expensive, requiring access to large amounts of satellite data, lots of hard drives to hold the data, lots of computers to process the data, and lots of time while you wait for various computations to finish,” wrote McClendon in a post on the official Google.org blog. “Our prototype demonstrates how Earth Engine makes all of this easier, by moving everything into the cloud. Google supplies data, storage, and computing muscle. As a result, you can visualize forest change in fractions of a second over the web, instead of the minutes or hours that traditional offline systems require for such analysis.”

McClendon noted that while the Earth Engine prototype applications aren’t yet available to the public, Google.org will make them freely available to tropical countries to support their forest monitoring programs when they are ready.

“I believe that this is just the first of many Earth Engine applications that will help enable scientists, policymakers, and the general public to better monitor and understand the Earth’s ecosystems,” he wrote. 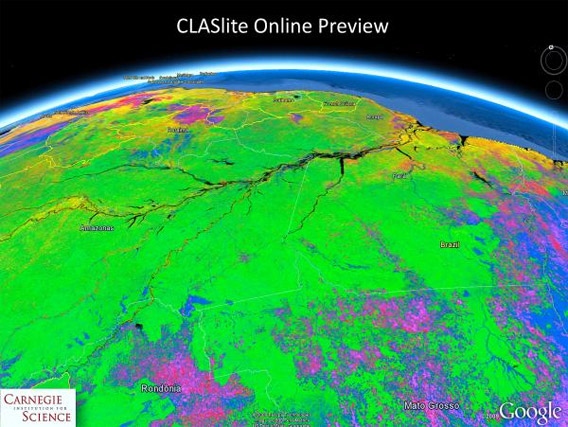 This CLASlite image of the Amazon Basin shows deforested regions in pink and blue, and intact forests in green.

Deforestation and forest degradation is a larger source of greenhouse gas emissions than all the world’s cars, trucks, planes, trains, and ships combined. It is also a threat to biodiversity, indigenous cultures, and critical ecosystem services like rainfall provision and flood control. Thus a newly proposed mechanism that aims to slow deforestation by compensating countries and landowners for protecting forests has won wide support at climate talks in Copenhagen. But to qualify for payments under Reducing Emissions from Deforestation and Degradation (REDD), countries must be able to quantify reductions in deforestation against a historical baseline — a tall order for most countries. Therefore a tool that enables countries to measure past deforestation and track forest disturbance and loss shortly after it occurs would be of great value in efforts to fight climate change by cutting greenhouse gas emissions from deforestation.

Two institutions have developed technologies that come a long way towards making this tool a reality: the Carnegie Institute for Science’s CLASlite system (led by Greg Asner), which uses satellite imagery and laser deployed from airplanes (airborne Light Detection and Ranging – LiDAR) to build high-resolution, 3-D maps of forests that can measure logging and other disturbance; and Imazon’s Sistema de Alerta de Deforestation (SAD) (led by Carlos Souza), which uses satellite imagery to rapidly detect and report deforestation. Now through a prototype project, Google brings the power of these technologies online, harnessing its massive computing cloud.

(11/29/2009) A new handbook lays out the methodology for cultural mapping, providing indigenous groups with a powerful tool for defending their land and culture, while enabling them to benefit from some 21st century advancements. Cultural mapping may also facilitate indigenous efforts to win recognition and compensation under a proposed scheme to mitigate climate change through forest conservation. The scheme—known as REDD for reducing emissions from deforestation and degradation—will be a central topic of discussion at next month’s climate talks in Copenhagen, but concerns remain that it could fail to deliver benefits to forest dwellers.

(03/29/2009) Armed with vivid images from space and remote sensing data, scientists, environmentalists, and armchair conservationists are now tracking threats to the planet and making the information available to anyone with an Internet connection.