Extinctions on the rise in the Galapagos: fishing and global warming devastating islands’ species

We may never see again the Galapagos black-spotted damselfish, the beautiful 24-rayed sunstar, or the Galapagos stringweed. These species from Galapagos waters may all very well be extinct. Other species are on the brink, such as the Galapagos penguin and the Floreana cup coral. A new report in Global Change Biology reveals that in just a matter of decades, overfishing and climate change has devastated the Galapagos’ unique and famous ecosystems.

“If marine species are going extinct in one of the most famous, and most cherished World Heritage Sites, what is happening in the rest of the world that has been so little studied?” asks report coauthor Scott Henderson, Conservation International’s Regional Marine Conservation Director in the Eastern Tropical Pacific.

The double-whammy of higher ocean temperatures from the El Nino weather cycle, possibly worsened by climate change, and overfishing (also including smaller impacts such as tourism) have created a situation in which many species have fallen without being able to recover. The researchers warn that the gloomy picture in the Galapagos today may be the state of the oceans to come.

During El Nino years the ocean waters surrounding the Galapagos Islands rise a few degrees. Since this rise is in line with the temperature hikes predicted by current climate change scenarios in the region, by looking at the Galapagos researchers are able to get a sense of what future extinctions might look like.

“Nowhere on Earth are the combined impacts of climate change and overfishing more clearly defined than in the Galapagos Islands where unique assemblages of wildlife live on the sharp edge of change. Decades of data link recent fishing pressures to disruption of the islands’ fine-tuned systems, making them more vulnerable to natural—and anthropogenic changes in climate,” explains Sylvia Earle, co-author of the report.

To understand the impact of fishing, researchers have compared the ecosystems of heavily to lightly fished areas in the Galapagos Marine Reserve. They discovered that overfishing of sea urchin has led to devastating consequences. Lacking normal predator, sea urchins have expanded their territory in the waters around the Galapagos, consuming algae at an incredible rates. This algae is very important for a number of marine species, including the famous Galapagos marine iguanas.

“Though too late to stop, we now know that the impacts of climate change can be softened by cutting back on fishing. The wildlife we eat today was part of the inner workings of an ecosystem which was under stress from global climate change and when these ecosystems are damaged, species and livelihoods can vanish in a heartbeat,” says Professor Les Kaufmann from Boston University.

“It is time we recognize that the Ocean has limits just as the rain forests of the Amazon, the rivers of Europe, the ice sheets of the Arctic and the grasslands of the Great Plains. For seas to thrive we need increased efforts to slow climate change, more, bigger and better managed marine protected areas (MPAs) and better managed fishing activities outside MPAs,” says Henderson. 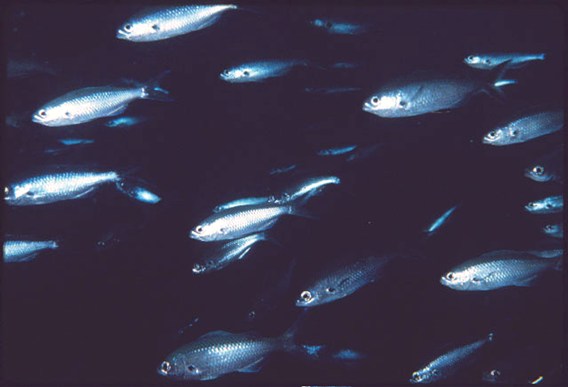 The black spotted damselfish Azurina eupalama, formerly common in Galápagos waters is considered probably extinct as it has not been seen for over 25 years following the strong El Nino of 1983-1984. Photo by: Jack Grove. 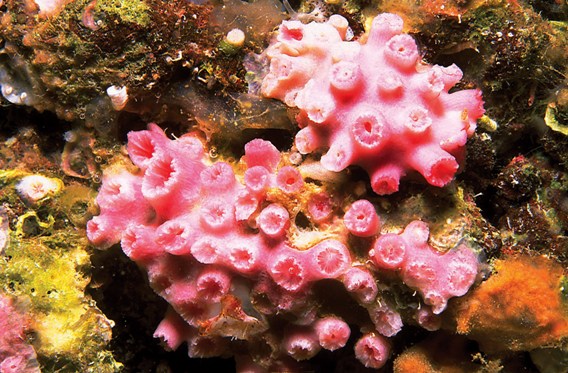 The Floreana cup coral Tubastraea floreanais considered a critically endangered with only a few small colonies remaining following devastating warming episodes that cause mass die off. Photo by: Paul Humann. 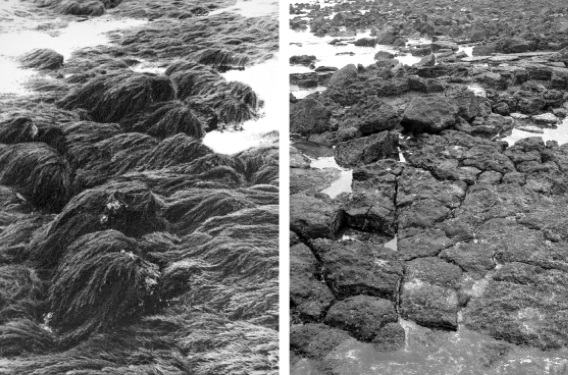 Pre- and post-El Nino algae bed transformation Long tracts of algal beds dominated kilometers of coastline before strong warming events in the 1980s and 90s. These unique and highly diverse ecosystems have virtually vanished Photo on right by Gerry Wellington in 1974. Photo on left same location by: Fernando Rivera in 2003. 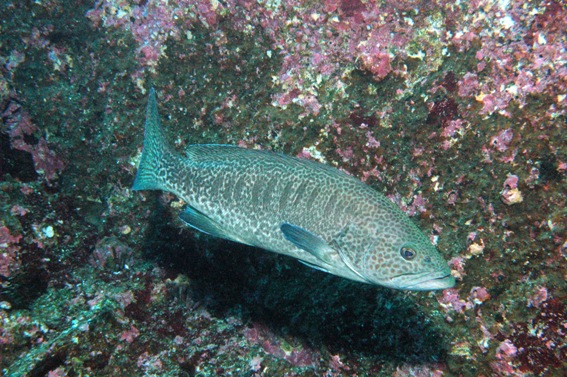 The Galápagos grouper Mycteroperca olfax is one of the more important species to local Galápagos fisheries, but is now considered a Vulnerable species due primarily to overfishing. Photo by: Graham Edgar. 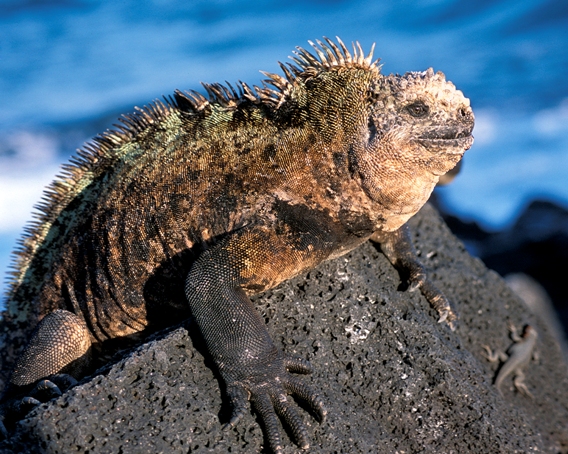 (01/06/2009) A newly identified, but already endangered species of pink land iguana may provide evidence of the lizard’s evolution on the Galápagos Islands, report researchers writing in the Proceedings of the National Academy of Sciences.

Climate change will increase the erosion of coral reefs

(07/28/2008) Coral reefs are particularly susceptible to climate change. Warming waters have been shown to bleach coral, killing off symbiotic algae that provide them with sustenance, and often leading to the death of the coral itself. Much attention has been placed on bleaching coral, but now scientists have discovered an additional danger to coral reefs in a warming world: erosion.

Nature tourism taking a toll in the Galapagos

(01/05/2008) A booming “ecotourism” industry is bringing new threats to the Galapagos, reports a feature in the Wall Street Journal.