Record year for CO2 emissions, even with economic slowdown

8.7 billion tons of carbon dioxide was emitted into the earth’s atmosphere in 2008, a growth of 2 percent despite the economic crisis. This averages out to each person contributing a record high of 1.3 tons of carbon, according to a report in the journal Nature Science. While the global recession slowed the growth of fossil fuel emissions for the first time this decade this year, it did not lower overall emissions in 2008.

“Reduction of CO2 emissions is a very urgent task,” says study coauthor Taro Takahashi, a geochemist at Columbia University’s Lamont-Doherty Earth Observatory. “Global population is increasing, and so is the standard of living for the developing world. We need to conserve energy by building more efficient cars and power plants. We should also develop technology to capture carbon dioxide from the air and store it away permanently.”

The study points out that the blame for carbon emissions still rests largely on wealthy countries. In the 1990s CO2 emissions grew at a rate of 1 percent every year, but in the 2000s the percentage of annual growth rose to 3.6 percent. This is in part due to the developing world producing more manufacturing goods for the developed world: these goods are largely sold to Europe, the United States, and other wealthy nations.

“This shows that developed nations are partly responsible for the growth of emissions in developing nations,” said Takahashi. “This may help bring about more equitable international agreements to lower CO2 emissions.”

For example, while China is now the world’s largest greenhouse gas emitter, the report found that 50 percent of its emissions growth is due to export goods, largely for the developed world. Growth in consumption-based emissions in the United States—which includes imported manufactured goods from China—was nearly three times greater than domestic emissions growth.

As governments and society fail for another year to lower emission levels, there are troubling signs that the globe’s carbon sinks are slowing down.

“The fraction of emissions remaining in the atmosphere has increased over the past 50 years,” says coauthor Pep Canadell, head of the Global Carbon Project and a climate scientist at Australia’s national science agency, the Commonwealth Scientific and Industrial Research Organisation. “This is of concern as it indicates the vulnerability of the sinks to increasing emissions and climate change, making natural sinks less efficient ‘cleaners’ of human carbon pollution.”

Of particular concern is research showing that the ocean’s capacity to store carbon is not keeping pace with humans’ ability to emit it. However, on land carbon sequestration is likely holding steady. In fact, higher levels of carbon in the atmosphere may actually be allowing forests to become a larger carbon sink. Carbon dioxide could be increasing the rate of growth in trees.

Despite these warning signs and continuing increases in emissions, international policy to lower emissions and mitigate climate change remains stagnated. Over the weekend, it was announced that there would be no legally binding agreement in Copenhagen in December. The world will likely have to wait another year.

The report, entitled Trends in the sources and sinks of carbon dioxide, was crafted by scientists with the Global Carbon Project, which is tasked with providing policymakers an annual account of global carbon levels. 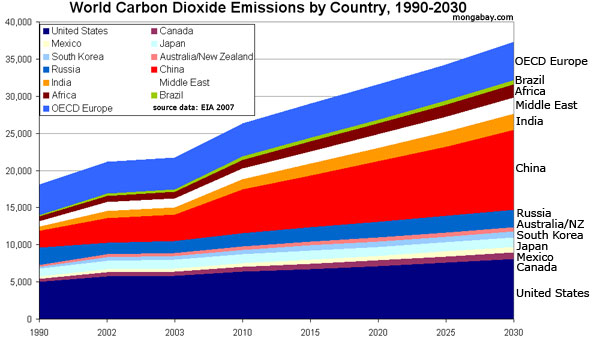 (11/15/2009) In a move that some observers say could provide a path forward on a future climate agreement that includes emissions cuts in developing countries, Brazilian President Luiz Inacio Lula da Silva said his country will aim to reduce emissions 14 to 19 percent below 2005 levels by 2020.

Emissions from deforestation overestimated; 12% rather than 17%

(11/04/2009) Greenhouse gas emissions from deforestation are lower than previously believed, according to a new study published in Nature Geoscience. The findings mean that developing countries may see less money under Reducing Emissions from Deforestation and Degradation, a proposed climate change mitigation mechanism.

Carbon accounting must not neglect emissions from bioenergy production and use

(10/29/2009) Carbon accounting used in the Kyoto Protocol and other climate legislation currently neglects CO2 emissions from the production of biofuels, a loophole that could drive large-scale destruction of tropical forests and exacerbate global warming, warned researchers writing last week in the journal Science.

(09/22/2009) In a statement issued today, more than 500 business leaders have called for “an ambitious, robust and equitable global deal” on climate change.

(08/12/2009) India accounts for about five percent of global carbon dioxide emissions, roughly a quarter of the emissions of China and the United States, according to an Indian government study reported by Reuters.