Oil palm developers in the Indonesian half of New Guinea are signing questionable deals that exploit local communities and put important forest ecosystems at risk, alleges a new report from Environmental Investigation Agency (EIA) and Telapak.

The report, “Up for Grabs”, warns that five million hectares of land in Papua and West Papua are being targeted by powerful agroindustrial companies. The report alleges that developers are using deceptive tactics in signing land deals with local people, including pledging development benefits such as improved transport, schooling, and housing but then failing to deliver on the promises. In one case, investigators from EIA/Telapak encountered a four year old boy, son of a local landowner, who was asked to sign a contract so that a plantation company could ensure control of the land for decades.

“Up for Grabs” reports that communities are inking agreements that pay them below market rates for their land — from $1.50 to $45 per hectare. By comparison a developer can reap hundred to thousands of dollars a year from an oil palm plantation once it reaches maturity in 3-5 years.

EIA and Telapak also found companies illegally clearing forest for plantations before the necessary permits had been secured. The clearing was done with full government knowledge.

“Companies are tricking Papuans into giving up their land for oil palm plantations based on empty promises about their future welfare,” said Hapsoro of Telapak in a statement. “This is all happening with the backing of the government in the name of development.”

The report calls for a suspension of future plantation permits in Papua “until strong safeguards to support the rights of local communities and protect forests are put in place.” It also urges consumers of palm oil and timber in developing countries to carefully consider the role their behavior has in deforestation of Papua’s rainforests. 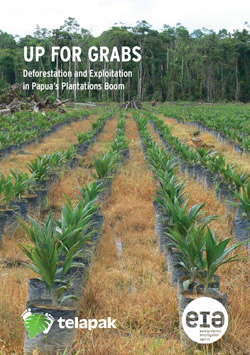 UP FOR GRABS: Deforestation and Exploitation in Papua’s Plantations Boom [PDF 1.45 MB]

(08/12/2009) A new report from published by the Center for International Forestry Research (CIFOR) highlights the benefits — and controversies — of large-scale expansion of oil palm agriculture in Southeast Asia. The review, titled “The impacts and opportunities of oil palm in Southeast Asia: What do we know and what do we need to know?”, notes that while oil palm is a highly productive and profitable crop, there are serious concerns about its environmental and social impact when established on disputed land or in place of tropical forests and peatlands.