There are many adjectives one could attach to the aquatic tenrec: rare, mysterious, elusive, one-of-a-kind, even adorable, though one tries to stray from such value-laden titles since it excludes so many other non-adorable inhabitants of the animal kingdom.

This small and, yes, adorable insectivore, also known as the web-footed tenrec, lives in Eastern Madagascar where at night it spends the majority of its time swimming and diving in fast-moving streams for insects and tadpoles. It sleeps during the day in small streamside burrows. To date that is about the extent of our knowledge of this species.

The aquatic tenrec Limnogale mergulus is so rare that Dr. Link Olson, curator of mammals at the University of Alaska Museum and one of only a handful of researchers who have studied the aquatic animal, has yet to actually find one in the wild.

“I have seen their scat, though,” he says. “They are among the most difficult small mammals in the world to capture: that’s a paraphrase of something Edwin Gould, formerly of the U.S. National Zoo, told me.”

Olson explains that the aquatic tenrec is noteworthy because, “it is the only semiaquatic terrestrial mammal on Madagascar and has evolved several adaptations for aquatic locomotion that we see in other distantly related mammals (e.g., otters, water shrews, etc.).” Olson calls the aquatic tenrec a “fascinating example of evolutionary convergence,” meaning that it has evolved traits similar to other water-dwellers, such as webbed feet, even though it is entirely unrelated.

The aquatic tenrec—and all tenrecs for that matter—belong to a bizarre group of animals called the Afrotheria. This group includes everything from elephants to sea cows and aardvarks to hyraxes. It is no wonder then that it took genetic evidence for researchers to finally piece this group together.

For their part the thirty species of tenrec are most closely related to elephant shrews and golden moles, all of which belong to Afrotheria. But the aquatic tenrec is even unique among tenrecs, since it has wholly adapted to life in the water.

“All we know is that it’s among the most unique mammal species, ecologically and evolutionarily, on Madagascar,” Olson says, “which is saying quite a lot.” In fact, the conservation organization EDGE (Evolutionary Distinct and Globally Endangered) lists the aquatic tenrec as the world’s 117th most endangered and most unique mammal.

Olson and other researchers have been surveying the aquatic tenrec’s population through collecting the animal’s scats. So far they have only found the animal in ten sites along streams in Eastern Madagascar. The IUCN Red List has classified the aquatic tenrec as Vulnerable to extinction due to its rarity, but to date there doesn’t appear to be any conservation group working directly with the species.

“No one is sure [what is currently threatening the aquatic tenrec],” Olson admits. “It’s incredibly difficult to study in the field, and what little has been published about its natural history to date hasn’t clarified its habitat requirements to the point of being able to identify any sort of management plan beyond conservation of riparian habitat and general watershed protection.” Olson adds that the first step for conservation of this species is simply more research.

“It may sound like a tired refrain, but it’s true nonetheless. Simply put, we don’t yet know enough about this species to understand the extent to which it may be threatened,” Olson explains.

The aquatic tenrec is an example—of which there are many—of a species that is so little known to science that conservationists remain unsure how to save it. 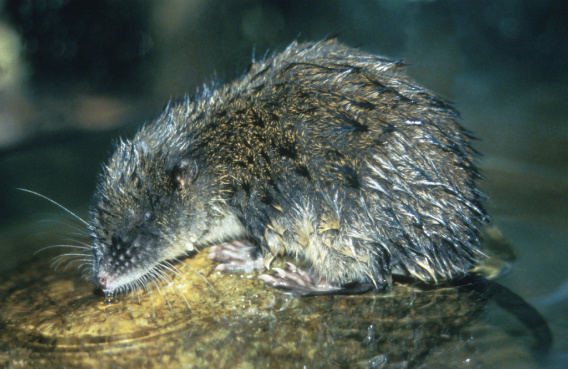