Indonesian authorities are failing to prevent illegal logging and conversion of protected areas for oil palm cultivation used to supply the European market with supposedly “green” biofuels, alleges a new report from Milieudefensie (Friends of the Earth Netherlands) and WALHI KalBar (Friends of the Earth Indonesia, West Kalimantan).

“While policy makers in Europe have established an obligation to use biofuels, the Ketapang study demonstrates that they are unable to take on the ultimate responsibility to ensure its sustainable supply,” states the report. “In merely three years time, the government of Ketapang issued oil palm permits covering no less than 40% of the district’s total land territory. The issuance of oil palm permits in Ketapang – now totaling around 90, with a total area of 1.4 million hectares – has obviously gone through a fast track manner, de facto waiving legal requirements designed to protect the environment and local communities and to ensure state income from forest conversion.”

The report notes that permits granted to plantation developers overlap with some 400,000 hectares of protected forest areas. Meanwhile at least 20 major land conflicts had already been reported in Ketapang by the end of 2008 and thousands of villagers have protested about unpaid wages from a palm oil comapny.

The report notes that the issues aren’t limited to Ketapang—the Indonesian Ministry of Environment categorized 78% of all environmental impact assessments (EIA) in Indonesia as being of poor quality.

“The Indonesian Ministry of Environment has been forced to relax EIA regulations because it was overwhelmed by violations of the country’s environmental laws,” states the report. “The Ministry of Forestry is confronted with large scale oil palm expansion within the forestland area. It faces an uphill struggle to reclaim its authority over this land.”

Friends of the Earth says that Europe’s Renewable Energy Directive, a policy designed to increase use of biofuels and other forms of renewable energy in the E.U., is not helping the situation. According to the report, the policy “does not require biofuel companies to guarantee and demonstrate the legality of their imports,” meaning that “palm oil from illegal sources ends up being subsidized and promoted by EU member state governments.”

“Failing governance – Avoiding responsibilities” goes on to note that though several of the companies operating in Ketapang are members of the RSPO, a body that has developed an eco-certification standard for palm oil, none of the plantations in the district have been certified.

“All considering, plantation development in Ketapang represents little else but a massive land
grab leading to biodiversity losses and carbon emissions from the illegal conversion of protected
forests and peatlands,” the report states. “Indigenous people are forced to give up their sustainable livelihoods and are being made dependent on the capricious global commodity and biofuels market. The local government in conjunction with plantation companies is directly undermining efforts towards good governance in Indonesia.”

The report concludes by urging E.U. countries to not expand their use of palm oil. It says that such action would send the message that bioenergy is not a real solution to climate change. The report also demands that the district government in Ketapang review the licenses it has granted “to prevent further expansion at the costs of forest and people, and work with the affected communities to restore what was lost.” 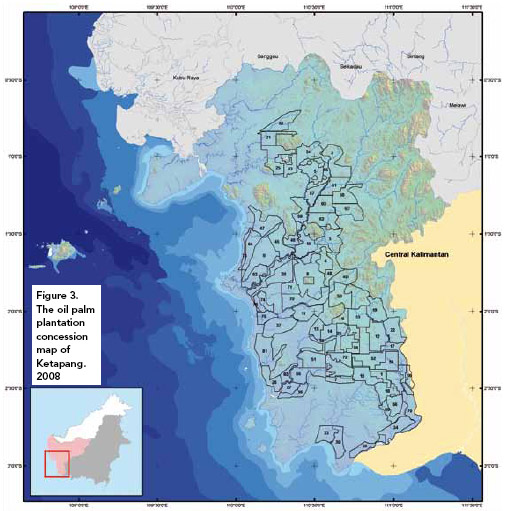