Scientists from a variety of organizations have found over 350 new species in the Eastern Himalayas over the past ten years according to a new report by the World Wildlife Fund (WWF). The discoveries have included a ‘flying’ frog, the world’s smallest and oldest deer, and a fossil of the world’s oldest gecko frozen in amber.

WWF, whose report on the region is entitled Where World’s Collide, warns that these rare biological treasures, as well as numerous other species, are threatened in the Eastern Himalayas by climate change.

The report highlights the over three hundred species discovered from 1998 to 2008 in the region, which includes Bhutan, northeast India, northern Myanmar, Nepal, and southern Tibet.

“This enormous cultural and biological diversity underscores the fragile nature of an environment which risks being lost forever unless the impacts of climate change are reversed,” said Tariq Aziz, the leader of WWF’s Living Himalayas Initiative. “People and wildlife form a rich mosaic of life across this rugged and remarkable landscape, making it among the biologically richest areas on Earth. But the Himalayas are also among the most vulnerable to global climate change.”

The region has a startling biodiversity. So far 10,000 plants, 977 birds, 300 mammals, 269 freshwater fish, 176 reptiles, and 105 amphibians have been recorded in the area. Of the newly discovered species 69 percent have been plants and 17 percent invertebrates.

Despite many new discoveries, large tracts of the Eastern Himalayas remain unexplored. With every new biological survye, more discoveries are likely. However, WWF warns, climate change may finish off these species before they are even found. The organization is calling for a strong international agreement to come out of the meeting in Copenhagen in December.

“Only an ambitious and fair deal based on an agreement between rich and poor countries can save the planet and its treasures such as the Himalayas from devastating climate change,” said Kim Carstensen, the Leader of the WWF’s Global Climate Initiative. 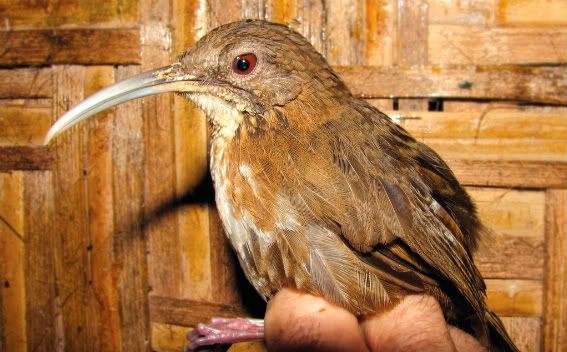 Naung Mung scimitar-babbler (Jabouilleia naungmungensis). The medium-sized jungle bird reminiscent of a wren is dark brown, with a short tail, long legs, relatively large feet and a long curved bill. This long bill is used to forage and probe for food on the ground. The species was officially described as a new species in 2005. Photo by: © Christopher Milensky / WWF Nepal. 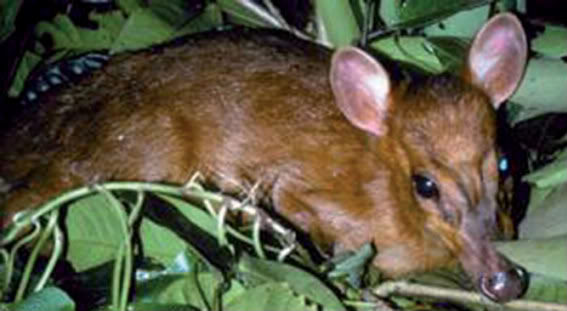 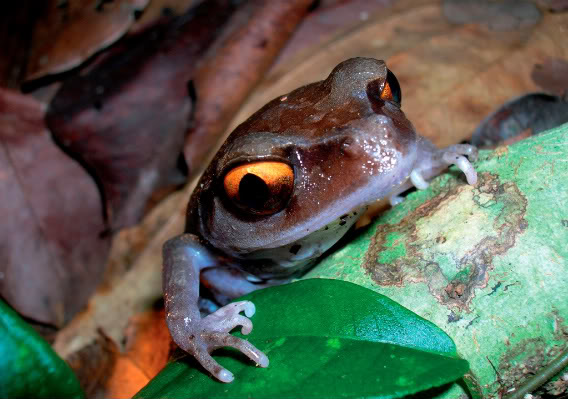 Smith’s litter frog (Leptobrachium smithi), identifi ed in 1999, one of fi ve new frog discoveries in the Indian state of Assam, must certainly rank among the most extraordinary-looking frogs in the world. Measuring only a few centimetres, this small frog has a giant pair of piercing, bulging and vivid golden eyes. Smith’s litter frog was reportedly discovered in the Mayeng Hill Reserve Forest and Garbhanga Reserve Forest, Kamru District, Assam. Photo by: © Milivoje Krvavac / WWF Nepal. 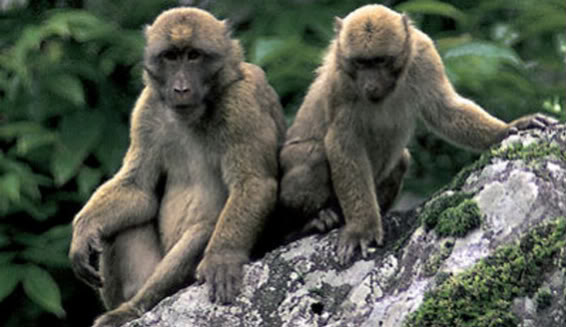 Arunachal macaque (Macaca munzala). Described as a new species in 2005, the relatively large brown primate with a short tail was a significant discovery as, at the time, it represented the first new monkey species identified anywhere in the world in over a century. The newly described macaque species is stocky in build and has a darker face than other closely related species. It is the highest-dwelling macaque in the world, occurring between 1,600m and 3,500m about sea level.Photo by: © Anindya Sinha / WWF Nepal. A male Gumprecht’s green pitviper (Trimeresurus gumprechti). Officially discovered in 2002, Gumprecht’s green pitviper is venomous and capable of growing to 130cm in length. Scientists predict that larger specimens exist. The species is known to occur around Putao, at altitudes above 400m in the far north of Myanmar. There are some striking differences between the males and females of this species; females reach a greater size, with a thin, white or whitish-blue streak on the head, and deep yellow eyes; males are shorter, have a red stripe on the head, and bright red or deep red eyes. Photo by: © Gernot Vogel / WWF Nepal. Cretacegekko burmae – a 100 million year old gecko, preserved in cretaceous amber. The fossil remains from the amber include a plethora of plant and invertebrate remains but vertebrate fossils are very rare. Photo by: © George Poinar / WWF Nepal. Macrobrachium agwi – new species of shrimp. A recent shipment of freshwater prawns imported into Europe from Cooch Behar, Bengal, had among their number a surprise stowaway; a previously unknown species to science. With its tinted reddish-brown colour, the medium sized new species Macrobrachium agwi, was described in 2008. Photo by: © Werner Klotz / WWF Nepal. Asian babbler or Bugun liochicla (Liocichla bugunorum). The species predominantly inhabits open-canopied hill forests with dense shrubs and small trees, and so far is known to be restricted to 2 sq km at an altitude of between 2,000m and 2,350m. Photo by: © Ramana Athreya / WWF Nepal. Orange-spotted snakehead (Channa aurantimaculata), endemic to the forest streams, ponds, and swamps adjacent to the Brahmaputra river in the subtropical rainforest of northern Assam. The species is remarkably striking, with a vibrant pattern of purple and orange adorning the length of its body. Discovered in 2000, and measuring up to 40cm in length, the fish is also known as the “orange-spotted snakehead”, as its head looks like that of a snake. It is carnivorous and predatory,enjoying a diet of smaller fi sh and invertebrates. Photo by: © Anders Lindersson / WWF Nepal. Zaw’s wolf snake (Lycodon zawi), discovered dwelling in forests and near streams at elevations of less than 500m high in Assam, India, including in the Garbhange Reserve Forest and in northern Myanmar. The black snake, with white bands, can grow to half a metre in length, and feeds mainly on geckos. Photo by: © Pawar Samraat / WWF Nepal. Impatiens namchabarwensis. Named after the canyon in which it was found, an area of Tibet which started to be explored as recently as the mid-1990s, the rare plant can grow 60cm tall and flowers all year round. The colour of the flower seems to change with temperature and exposure. They sometimes appear truly blue when in a cool climate and change to purple when temperatures rise; a characteristic unique for this species among impatiens. Photo by: © Elayne Takemoto / WWF Nepal. Assamese cascade frog (Amolops assamensis) found in Assam. Cascade frogs or torrent frogs as they are also known as, have adapted to life amongst the torrents, waterfalls and wet boulders that cascade out of Asia’s rainforests. Photo by: © Abhijit Das / WWF Nepa. Meconopsis tibetica, described in 2006, is one of 12 new poppy species discoveries. A vast garden stretches across the Eastern Himalayas, a mysterious and alluring landscape that has yielded on average of 24 new plant discoveries every year for the last 10 years. Photo by: © Margaret Thorne / WWF Nepal. Heterometrus nepalensis. Among the new finds are three species of scorpion, one of which was described from the Chitwan National Park in Nepal in 2004. This discovery was particularly significant as it was the first species of scorpion ever to be discovered in the country. The 8cm long, reddish-black, species has a smooth carapace, and a reddish-brown tail tip or telson that contains the venom. Photo by: © KOVÁ?ÍK Franti?ek / WWF Nepal. (02/16/2009) A marine census has documented more than 13,000 species in the Arctic and Antarctic Oceans, including several hundred that may be new to science. Conducted over a two-year period under often perilous conditions — including monster waves and dangerous polar bears — the series of 18 surveys turned up a wealth of information on the diversity, distribution and abundance of marine life. The research will also help establish a baseline for measure changes in polar ecosystems.