The move comes after the World Bank’s International Finance Corporation (IFC) withdrew a $90 million loan to Bertin following revelations in a Greenpeace report that the company was buying beef produced on illegally deforested lands. The report, which linked some of the world’s most prominent brands to rainforest destruction in the Amazon, had an immediate impact, triggering a cascade of events.

Days after the report was released, Brazil’s biggest domestic beef buyers, supermarket chains Wal-Mart, Carrefour, and Pão de Açúcar, announced they would suspend contracts with suppliers found to be involved in Amazon deforestation. Investigators raided the offices of JBS, the world’s largest beef processor, and other firms, arresting executives for corruption, fraud, and collusion. A Brazilian federal prosecutor filed a billion-dollar law suit against the cattle industry for environmental damage, warning that firms found to be marketing tainted meat will be subject to fines of 500 reais ($260) per kilo. Marfrig, the world’s fourth largest beef trader, said it would institute a moratorium on buying cattle raised in newly deforested areas within the Brazilian Amazon. BNDES, the development bank that accounts for most financing for the agricultural sector in Brazil, announced it would reform its lending policies, making loans contingent on environmental performance. Shoemakers Adidas, Clarks, Nike, Geox and Timberland all unveiled new sourcing policies to ensure their products don’t use leather produced from Amazon deforestation.

Bertin says within six months it will register and map all ranches which directly supply cattle to the company. By 2011 Bertin will implement a traceability system to track cattle from ranches to slaughterhouses and processing facilities to ensure that it is not buying from farms links to land conflict, slave labor, land grabbing, or otherwise illicit forest clearing.

“Environmental responsibility is increasingly relevant for a company like ours to maintain and enhance its position in Brazil and abroad,” said Fernando Bertin, CEO of Bertin, S.A. “Today, we are making a fundamental step.”

“Given the sheer size of Bertin’s operations, this commitment will have a significant impact on driving down Amazon deforestation and greenhouse gas emissions. Greenpeace will closely monitor the moratorium’s implementation to ensure its success,” said Paulo Adario, Greenpeace Amazon coordinator.

Now that Bertin and Marfrig have agreed to a moratorium on using cattle from illegally deforested areas, JBS-Friboi is the remaining holdout among Brazilian cattle industry majors. Greenpeace says that JBS has remained mum on the issue and has actually expanded operations in the Amazon in the wake of the scandal.

“JBS-Friboi must accept its responsibilities and stop fueling Amazon destruction. It needs to join these companies in protecting the rainforest now,” said Adario.

Cattle’s impact in the Amazon 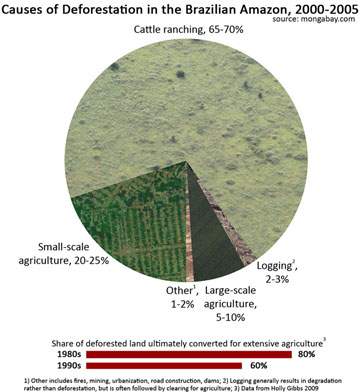 Cattle ranching is overwhelmingly the biggest driver of deforestation in the Brazilian Amazon: the fate of nearly 80 percent of cleared rainforest land is to serve as forage for livestock. Since 2006 more than 38,600 square miles has been cleared for pasture, bringing the total area occupied by cattle ranches in the Brazilian Amazon to 214,000 square miles, an open space larger than France. The Brazilian Amazon, region consisting of rainforests and a biologically rich wooded grassland known as cerrado, is now home to more than 80 million head of cattle, up from 26.6 million in 1990 and equivalent to more than 85 percent of the total U. S. herd. Brazil is today the world’s largest exporter and producer of beef.

Brazilian cattle products end up in a wide array of consumer goods. Fresh beef is converted into burgers sold in fast-food restaurants and grocery stores across Brazil, Russia, Venezuela, and a number of other countries. Processed meat finds its way into canned products in Europe and America, while leather goes to China, Italy, Vietnam, and Hong Kong where it is used in shoes and apparel sold worldwide.

Controlling the Ranching Boom That Threatens the Amazon [for Yale e360]

(08/10/2009) Environmental groups have warned for years that cattle production is gobbling up huge chunks of the world’s largest rainforest, but their campaigns have had no discernible impact on deforestation. But in catering to conglomerates serving an international market — part of a broader trend over the past 20 years in which industrial corporations have replaced poor farmers as the primary agents of deforestation — producers have left themselves exposed to consumer backlash. It’s tough for an environmental group to target a subsistence farmer who’s clearing land to feed his family; it’s much easier to go after a multinational enterprise. So ironically, in its strength, the multibillion-dollar Brazilian cattle industry developed an Achilles’ heel. In June, Greenpeace leveraged this vulnerability. The green group issued “Slaughtering the Amazon,” a report linking prominent global corporations — including Wal-Mart, Nike, and the French-based Carrefour grocery store chain — to cattle operations that are illegally clearing the Amazon rainforest. The fallout was immediate and substantial, and now a number of important players are moving to build on the report’s momentum by enlisting retailing giants to purchase Amazon beef and leather derived from more sustainable sources.

(07/29/2009) Timberland, a maker of hiking boots and other footwear, today announced it would demand a moratorium on leather produced from newly deforested areas in the Amazon. The move is a direct response to pressure from Greenpeace, which last month released Slaughtering the Amazon, a report that linked some of the world’s most prominent brands to illegal clearing of the Amazon rainforest. Timberland says it will require its leather suppliers to commit to the moratorium on newly deforested areas in the Amazon. Greenpeace says the policy “makes Timberland the industry leader in environmentally and socially responsible Brazilian leather procurement.”

(07/22/2009) Nike is working with Greenpeace to ensure its products don’t contribute to destruction of the Amazon rainforest, according to statements from the shoe giant and the environmental activist group. The partnership comes after Greenpeace report accused Nike of using leather derived from cattle raised on illegal deforested Amazon land. The report, “Slaughtering the Amazon”, also linked other shoemakers to rainforest destruction, including Adidas, Reebok and Timberland.

(07/01/2009) Responding to allegations that major Brazilian cattle producers are responsible for illegal forest clearing in the Amazon, Brazil’s development bank BNDES will soon require processors to trace the origin of beef back to the ranch where it was produced in order to qualify for loans, reports Brazil’s Agencia Estado. The traceability program aims to ensure that cattle products do not come from illegally deforested land.

(06/25/2009) Marfrig, the world’s fourth largest beef trader, will no longer buy cattle raised in newly deforested areas within the Brazilian Amazon, reports Greenpeace. The announcement is a direct response to Greenpeace’s Slaughtering the Amazon report, which linked illegal Amazon forest clearing to the cattle producers that supply raw materials to some of the world’s most prominent consumer products companies. Marfrig was one several cattle firms named in the investigative report.

(06/13/2009) The Work Bank’s private lending arm has withdrawn a $90 million loan to Brazilian cattle giant Bertin, following Greenpeace’s release of a report linking Bertin to illegal deforestation of the Amazon rainforest, report environmental groups, Friends of the Earth-Brazil and Greenpeace. The loan, granted by the International Finance Corporation (IFC) in March 2007, was to expand Bertin’s meat-processing in the Brazilian Amazon. At the time, the IFC promoted the loan as a way to promote environmentally responsible beef production in the Amazon, although environmental groups — including Friends of the Earth-Brazil and Greenpeace — criticized the move.

(06/12/2009) Brazil’s three largest supermarket chains, Wal-Mart, Carrefour and Pão de Açúcar, will suspend contracts with suppliers found to be involved in Amazon deforestation, reports O Globo. The decision, announced at a meeting of the Brazilian Association of Supermarkets (Abras) this week, comes less than two weeks after Greenpeace’s exposé of the Amazon cattle industry. The report, titled Slaughtering the Amazon, linked some of the world’s most prominent brands — including Nike, Toyota, Carrefour, Wal-Mart, and Johnson & Johnson, among dozens of others — to destruction of the Amazon rainforest for cattle pasture.

(02/16/2009) Nearly 80 percent of deforestation in the Brazilian Amazon results from cattle ranching, according to a new report by Greenpeace. The finding confirms what Amazon researchers have long known – that Brazil’s rise to become the world’s largest exporter of beef has come at the expense of Earth’s biggest rainforest. More than 38,600 square miles has been cleared for pasture since 1996, bringing the total area occupied by cattle ranches in the Brazilian Amazon to 214,000 square miles, an area larger than France. The legal Amazon, an region consisting of rainforests and a biologically-rich grassland known as cerrado, is now home to more than 80 million head of cattle. For comparison, the entire U.S. herd was 96 million in 2008.