Arctic sea ice thinned dramatically between the winters of 2004 and 2008, with thin seasonal ice replacing thick older ice as the dominant type of sea ice for the first time on record, report NASA researchers.

Scientists from NASA and the University of Washington used observations from NASA’s Ice, Cloud and land Elevation Satellite (ICESat) to make the first Arctic Ocean basin-wide estimate of the thickness and volume of sea ice cover. The researchers found that overall Arctic sea ice thinned about 17.8 centimeters (7 inches) a year, for a total of 67 cm (2.2 feet) over the four winters from 2004 to 2008. The total area covered by thick older ice that survives one or more summers (“multi-year ice”) shrank 42 percent or 1.54 million square kilometers (595,000 square miles), leaving thinner first-year ice (“seasonal ice”) as the dominant type of ice in the region. The share of seasonal ice increased from 38 percent of the Arctic’s total ice volume in 2003 to 68 percent in 2008.

“Even in years when the overall extent of sea ice remains stable or grows slightly, the thickness and volume of the ice cover is continuing to decline, making the ice more vulnerable to continued shrinkage,” said Ron Kwok, the senior research scientist at NASA’s Jet Propulsion laboratory who led the study, which is published today in Geophysical Research-Oceans.

The researchers say changes in the overall thickness and volume of Arctic Ocean sea ice are driven by “recent warming and anomalies in patterns of sea ice circulation,” according to a statement from the American Geophysical Union (AGU), which publishes Geophysical Research-Oceans.

“The near-zero replenishment of the multi-year ice cover, combined with unusual exports of ice out of the Arctic after the summers of 2005 and 2007, have both played significant roles in the loss of Arctic sea ice volume over the ICESat record,” Kwok said.

“Ice volume allows us to calculate annual ice production and gives us an inventory of the freshwater and total ice mass stored in Arctic sea ice,” he notes. “Our data will help scientists better understand how fast the volume of Arctic ice is decreasing and how soon we might see a nearly ice-free Arctic in the summer.”

In 2007 study co-author and ICESat Project Scientist Jay Zwally warned that the Arctic could be nearly ice-free by the summer of 2012. Melting in the Arctic that year was so extensive (the lowest Arctic sea ice cover since record-keeping began) that the fabled Northwest Passage was open to navigation for the first time on record. Scientists say the Northeast Passage — north of Russia — may soon also be navigable due to disappearing sea ice.

The melting has set off a scramble between Canada, Russia, the U.S., Denmark, Sweden and Norway which are all seeking to claim rights to the Arctic’s rich mineral and gas deposits.

Environmentalists are concerned that the loss of summer sea ice could have dramatic implications for wildlife — like polar bear and walrus — that depend on pack ice for feeding. 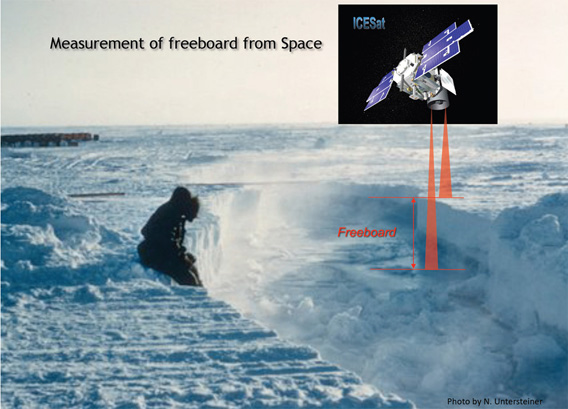 ICESat measures the distances to the top of the snow cover and to the sea surface. The difference between the two quantities gives the total “freeboard” measurement; that is, the amount of ice above the water line relative to the local sea level. Credit: Courtesy of Norbert Untersteiner, University of Washington

This schematic shows the geometric relationship between freeboard (the amount of ice above the water line), snow depth, and ice thickness. Buoyancy causes a fraction (about 10 percent) of sea ice to stick out above the sea surface. By knowing the density of the ice and applying “Archimedes’ Principle” — an object immersed in a fluid is buoyed up by a force equal to the weight of the fluid displaced by the object — the total thickness of the ice can be calculated. Credit: Ron Kwok, NASA/JPL