One quarter of fire hotspots recorded in the Indonesia province of Riau on the island of Sumatra in 2009 have occurred in concessions affiliated with Sinar Mas Group’s Asia Pulp & Paper (APP), according to new analysis by Eyes on the Forest, a coalition of environmental groups. The fires are contributing to the “haze” that is affecting air quality and causing health problems in Malaysia.

The analysis of NASA satellite imagery by Eyes on the Forest reveals that APP continues to clear forest in the Giam Siak Kecil-Bukit Batu, a block of which was recently declared a UNESCO Biosphere Reserve.

“Asia Pulp & Paper/Sinar Mas Group and their associated companies should take seriously their legal responsibility as license holders to prevent such fires in their concessions, regardless of whether the fires are caused by themselves or others,” said Susanto Kurniawan of Jikalahari. “We also call on APP/SMG to stop building new roads through or next to natural forest, digging peat drainage canals and clearing any more natural peatland forest. All of that facilitates fires.”

“Whether through fires, draining or forest clearance in its wood-sourcing concessions, APP/SMG is the single biggest contributor to the destruction of natural forest and peat soil in the original ecosystem where the Biosphere Reserve was established. Between 1996 and 2007, APP had pulped 177,000 hectares – 65 percent of all natural forest lost in the ecosystem,” added Nursamsu of WWF-Indonesia. 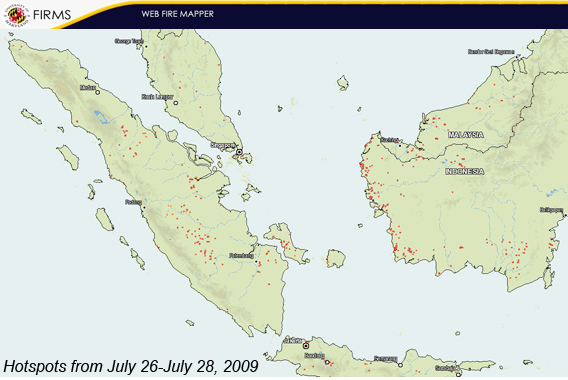 For the first 6 months of 2009 that Riau Province had the largest number of fire “hotspots” in Indonesia with 4,782.

“These forests were cleared sometimes without proper licenses and sometimes even inside provincial protection areas,” said Hariansyah Usman of Walhi Riau. “In addition, they also sometimes violated Presidential Decree Number 32 Year 1990, which prohibits clearance of natural forest on peat soil deeper than 3 meters. APP/SMG still continues this kind of legally questionable forest clearance elsewhere in Sumatra. We call on the government to reopen the findings of the recently terminated illegal logging investigation properly, instead of closing the case. We also call on the government to take legal action against companies which set fires.”

Eyes on the Forest notes that only 35 percent of the 700,000-hectare UNESCO Biosphere Reserve is natural forest—the rest is dominated by biologically-impoverished acacia plantations.

“We hope that the biosphere reserve’s natural forest will remain and that the health of the peat ecosystem of the reserve will recover. For that to happen, APP needs to provide real security to the area and conduct responsible hydrological management of the peat. The recent fire hotspot map clearly shows that the company does not. It is time for them to live up to their own PR,” said Jikalahari’s Susanto Kurniawan.

APP has been targeted by green groups for its role in the destruction of forests and peatlands in Bukit Tigapuluh in Central Sumatra. APP’s activities threaten an important population of critically endangered Sumatran orangutans as well as other at-risk species, including Sumatran tigers. APP plans to clear up to 200,000 hectares of Bukit Tigapuluh.