Auckland Zoo has pulled Cadbury chocolates from its shops and restaurants following the candy maker’s decision to start adding palm oil to its chocolates, reports the Sunday Star Times.

The zoo is also removing other products that contain palm oil, due to concerns that its production is driving rainforest destruction across Southeast Asia, putting orangutans and other species at risk.

Cadbury said it made the change to palm oil for economic reasons. Palm oil, described as “vegetable fat” on its packaging, is cheaper than cocoa butter. 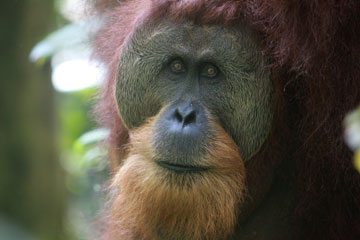 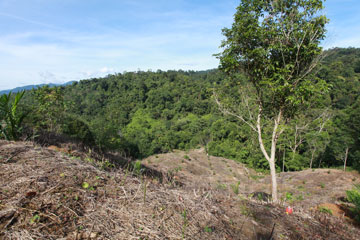 Rainforest cleared for oil palm agriculture in North Sumatra. Photos taken by Rhett A. Butler in May 2009.

Cadbury says it tries to source its palm oil from sustainable sources. It is a member of the Roundtable for Sustainable Palm Oil (RSPO), an initiative that seeks to improve the environmental performance of palm oil. Critics of RSPO say it is little more than a greenwashing scheme to mislead consumers, but supporters, which include prominent environmental groups and orangutan conservation organizations, maintain that the certification program can be a effective way to balance environmental concerns and economic development. Nevertheless sales of RSPO-certified palm oil — which presently costs about 8 percent more than conventional palm oil — have been slow, according to industry watchers, who say the economic downturn has led consumers to prioritize thrift over ecological concerns. The Malaysian Palm Oil Council, an industry body, and WWF have warned that lack of interest in “green” palm oil, while send the wrong signal to producers.

“This sluggish demand from palm oil buyers, such as supermarkets, food and cosmetic manufacturers, could undermine the success of sustainability efforts and threatens the remaining natural tropical forests of Southeast Asia, as well as other forests where oil palm is set to expand, such as the Amazon,” David McLaughlin, vice president of agriculture for WWF, an environmental group that is part of the RSPO, said in May.

“We have been led down the path of false hope in selling environmentally certified palm oil and now the buyers are not keen on paying for the premium,” Malaysian Palm Oil Council Chief Executive Yusof Basiron told Reuters in an interview last week.

“The market signal is very clear. We can supply at a premium but if buyers are clearly not interested, the palm oil suppliers will have to change tack. This is still a business, after all.”

Meanwhile Cadbury’s rival, Whittaker, which doesn’t use palm oil, is benefiting from the controversy, according to Sunday Star Times.

With the clearing of forests,
baby orangutans are marooned

(06/25/2009) The orangutans at the Nyaru Menteng center, run by the Borneo Orangutan Survival Foundation (BOS), are mainly “oil palm orphans” whose forest habitats were destroyed — and parents killed — by the swiftly spreading oil palm industry in Indonesia. BOS hopes to eventually release all of these orangutans back into their natural habitat — the majestic rainforests and swampy peat lands of central Kalimantan. But for many, this is a fate that may never be realized, and instead they may be relegated to a life in captivity. The reason? Suitable habitat in Borneo and Sumatra — the two islands that are home to the world’s entire population of wild orangutans — is being deforested so rapidly that it is becoming increasingly difficult to find locations for reintroduction.

(04/15/2008) Boycotting palm oil produced in Southeast Asia in an “unrealistic” and “ineffective” approach to conserving the region’s fast-disappearing rainforests, said a Princeton University researcher speaking at a conference on the sustainability of palm oil. Instead, NGOs should focus on engaging and working with the palm oil industry to reduce its impact on the environment. Addressing the first International Palm Oil Sustainability Conference in Kota Kinabalu, Malaysia, Princeton biologist Dr. David S. Wilcove said that the palm oil industry is too important to the economies of Indonesia and Malaysia to justify blanket import bans on the edible oil used in food, cosmetics, industrial products, and biodiesel. The palm oil industry contributes to health, education, and infrastructure in rural areas.

(04/03/2007) The Associated Press (AP) recently quoted Marcel Silvius, a climate expert at Wetlands International in the Netherlands, as saying palm oil is a failure as a biofuel. This would be a misleading statement and one that doesn’t help efforts to devise a workable solution to the multiplicity of issues surrounding the use of palm oil.