The U.S. House of Representatives passed the country’s first climate change legislation on Friday. The 219-212 vote was highly partisan with Democrats generally supporting the American Clean Energy and Security Act, and Republicans mostly opposing it.

The bill effectively places a price on emissions of carbon dioxide, a gas scientists have linked to climate change. The bill mandates that 15 percent of the country’s electricity come from renewable energy sources by 2020.

The bill still needs to pass the Senate — where it will likely be revised — and win presidential approval to become law.

The bill has proved highly controversial and won the attention of powerful lobbies. Opponents claim the bill will significantly raise energy prices, while supporters say cost increases will be moderate and offset by other benefits. The nonpartisan Congressional Budget Office projects the bill will cost $22 billion, or about $175 per household, in 2020. 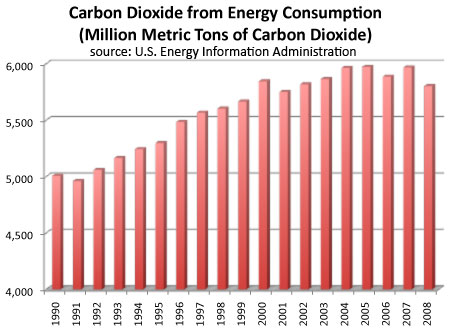 U.S. climate legislation is critical to an international agreement on greenhouse gas emissions at the U.N. climate meeting this December in Copenhagen. The conference will hammer out the successor treaty to the Kyoto Protocol, which expires in 2012 and has largely been viewed a as failure for regulating emissions, due partly to the lack of participation by the United States, the world’s largest emitted of CO2 until it was surpassed by China in 2007.

While carbon dioxide emissions from fossil fuel use in the United States fell 2.8 percent in 2008, U.S. emissions are presently 15.9 percent above the 1990 level (the baseline for the 1997 Kyoto Protocol) and 2.8 percent below the 2005 level (the baseline proposed under the American Clean Energy and Security Act of 2009 [the Waxman-Markey bill]). The recent decline has been attributed to a slowing economy and high gasoline prices.

Balloon technology could cut cost of solar energy 90% by 2010

(02/21/2007) With high energy prices and mounting concerns over human-induced climate change, there is intense interest in renewable energy, especially solar, which produces no pollution and is readily available in the form of sunlight. In recent years, however, the solar energy market has been hampered by supply shortages of refined silicon, the critical resource needed for solar cell fabrication. Further, because solar installations traditionally require a large surface area to capture as much sunlight as possible, solar arrays often take up real estate, occupying land used agricultural production and other purposes. Without government subsidies, solar is not presently viable in many areas.

(03/29/2007) The United States could dramatically cut oil usage over the next 20-30 years at low to no net cost, said Amory B. Lovins, cofounder and CEO of the Colorado-based Rocky Mountain Institute, speaking at Stanford University Wednesday night for a week-long evening series of lectures sponsored by Mineral Acquisition Partners, Inc.

(06/07/2007) Two renowned energy experts sparred in a debate over nuclear energy Wednesday afternoon at Stanford University. Amory Lovins, Chairman and Chief Scientist of the Rocky Mountain Institute, an energy think tank, argued that energy efficiency and alternative energy sources will send nuclear power the way of the dinosaurs in the near future. Dr. Burton Richter, winner of the 1976 Nobel Prize in physics, said that nuclear would play an important part of the future energy portfolio needed to cut carbon emissions to fight global warming.

(03/26/2007) Extinction is a hotly debated, but poorly understood topic in science. The same goes for climate change. When scientists try to forecast the impact of global change on future biodiversity levels, the results are contentious, to say the least. While some argue that species have managed to survive worse climate change in the past and that current threats to biodiversity are overstated, many biologists say the impacts of climate change and resulting shifts in rainfall, temperature, sea levels, ecosystem composition, and food availability will have significant effects on global species richness.