Coastal seagrass disappearing as quickly as coral reefs and rainforests

“While the loss of seagrasses in coastal ecosystems is daunting, the rate of this loss is even more so,” said co-author Dr. Robert Orth of the Virginia Institute of Marine Science of the College of William and Mary. The loss is on par with that of coral reefs and tropical forests.

Coastal developments, dredging activities, and declining water quality have all led to the global loss in seagrass ecosystem, according to the study published in the Proceedings of the National Academy of Sciences. 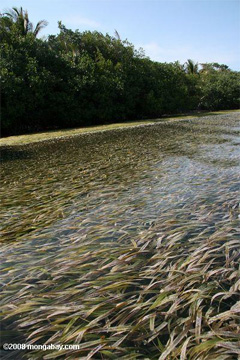 “A recurring case of ‘coastal syndrome’ is causing the loss of seagrasses worldwide,” said co-author Dr. William Dennison of the University of Maryland Center for Environmental Science. “The combination of growing urban centers, artificially hardened shorelines and declining natural resources has pushed coastal ecosystems out of balance. Globally, we lose a seagrass meadow the size of a soccer field every thirty minutes.”

A large part of the problem is the continual growth of human populations on the coast. “With 45 percent of the world’s population living on the 5 percent of land adjacent to the coast, pressures on remaining coastal seagrass meadows are extremely intense,” said co-author Dr. Tim Carruthers of the University of Maryland Center for Environmental Science. “As more and more people move to coastal areas, conditions only get tougher for seagrass meadows that remain.”

Seagrass ecosystems are made of submerged flowering plants. They provide many vital ecosystem services, including habitat for a large variety of marine life, alterations in water flow, mitigation of pollutants, and carbon sinks.

“With the loss of each meadow, we also lose the ecosystem services they provide to the fish and shellfish relying on these areas for nursery habitat. The consequences of continuing losses also extend far beyond the areas where seagrasses grow, as they export energy in the form of biomass and animals to other ecosystems including marshes and coral reefs,” added Orth.

(05/21/2009) The first global report on the state of shellfish was released today at the International Marine Conservation Congress in Washington, DC. Painting a dire picture for shellfish worldwide, the report found that 85 percent of oyster reefs have vanished.

(02/14/2008) There is a much used adage regarding the ocean that goes something like this: we know more about our solar system than our ocean. Whether or not one believes this to be true (less than 5% of the ocean has been explored), a group of over twenty researchers, by agglomerating the available information on the oceans, have created a large-scale image of the ocean’s health.

(12/01/2006) Seagrass ecosystems are in peril according to an article published in the December issue of the journal Bioscience. The paper says that seagrasses, which provide important ecological services including habitat for aquatic life, mitigation of nutrient and sediment pollution, and reduction of beach erosion, are highly threatened by coastal development, pollution, and agricultural runoff. Further, the paper warns that their degradation could be sign of worsening environmental conditions.