Satellites have long been used to detect and monitor environmental change, but capabilities have vastly improved since the early 1970s when Landsat images were first revealed to the public. Today Google Earth has democratized the availability of satellite imagery, putting high resolution images of the planet within reach of anyone with access to the Internet. In the process, Google Earth has emerged as potent tool for conservation, allowing scientists, activists, and even the general public to create compelling presentations that reach and engage the masses. 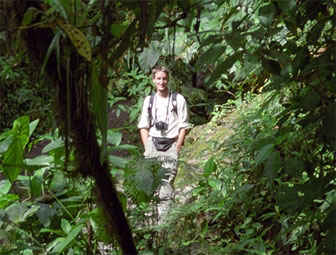 Tryse on the jungle path in Bako National Park in Sarawak


“A decade ago, high-resolution satellite imagery for the whole planet would have been accessible only to a handful of people working in government agencies, resource extraction, or as scientists. Today it is in the hands of hundreds of millions of people,” said Tryse. “It’s impossible to care about something if you don’t know it exists, but now people can fly across the planet and zoom in to see for themselves in a whole different way many of the issues of today, whether it’s a humanitarian crisis like burned down villages in Darfur or an environmental issue like what little forest remains for some of the world’s most endangered animals on the EDGE list.”


Mongabay: What is your background and when did you start developing conservation applications for Google Earth?

David Tryse: My background is in IT but I’ve always been interested in nature and environmental issues. This interest was particularly brought to
life during a year-long round-the-world trip I did in 2005 together
with my wife, especially a month we spent in Borneo – seeing sawmill
after sawmill on the river-sides when traveling by boat in Sarawak and
seeing nothing but endless palm-oil plantations both sides of the the
road for a full day when crossing the whole state of Sabah. It would
all have been forest when I was born (I’m just 30).

When back working again I started looking for ways I might be able to
do something useful for conservation with my skills et. I got in touch
with edgeofexistence.org — an interesting new conservation effort which selects focus species based on genetic distinctiveness [I think I heard of them through mongabay
actually ;-)] — to see if they would be interested in a Google Earth layer to visualize their
list of endangered mammals and their distribution. The company where I
work happened to be celebrating 25 years at the time with a drive to
donate money to charity when employees donate volunteer hours, so I
managed to raise the EDGE programme a bit of money through this
project as well.

The Google Earth Outreach team were fantastically enthusiastic and
helpful after I got in touch with them afterwards. I helped
beta-test one of their KML-tools and the EDGE KML is featured as a
case study on their site now to help inspire other charities.

I’ve made a number of other Google Earth layers since then as personal
projects, about oil spills, deforestation and other issues. One
comparing deforestation statistics for different countries in
particular made its way around the internet to many environmental
blogs and Google Earth tech blogs. I think a number of them picked it up from Mongabay, so thanks again Rhett :-).

Mongabay: Has tracking deforestation via Google Earth offered any surprises? David Tryse: People sometimes say poetically that you can’t see the
borders between different countries from space… but that is actually
not true any more. There are a number of places where the aggressive
deforestation in one country right up to the border of another makes
it possible to make out clearly in Google Earth, even when zoomed out
very far. Mexico-Guatemala, Brazil-Bolivia, Malaysia-Brunei, Haiti and the Dominican Republic, and
Thailand vs Cambodia and Laos are a few.

Mongabay: What makes Google Earth a powerful tool for conservation? David Tryse: A decade ago, high-resolution satellite imagery for the whole planet would have been accessible only to a handful of people working in government agencies, resource extraction, or as scientists. Today it is in the hands of hundreds of millions of people. It’s impossible to care about something if you don’t know it
exists, but now people can fly across the planet and zoom in to “see
for themself” in a whole different way many of the issues of today,
weather it’d be a humanitarian crisis like burned down villages in
Darfur or an environmental issue like how very little forest is left
for some of the worlds most endangered animals on the EDGE list. In
seconds anyone can zoom in to for example see the huge fires from
Shell’s gas-flaring operations in the Nigerian delta or follow the
discolored toxic runoff along a hundred kilometers of (recently
pristine) rainforest river downstream of a gold mine in Peru or
Indonesian Papua. I am convinced that this ease of access to
information that Google Earth is a great example of must be able to
change how citizens choose their governments and how consumers choose
their products in the future.

Mongabay: What projects are you working on now? David Tryse: At the moment I’m working on an online application that will help
others create Google Earth projects similar to some of the ones I have
made in the past. The tool will let you create visualizations similar
to the “Disappearing Forests” KML with any data by just uploading a
spreadsheet with country level statistics. I hope to launch it at

Mongabay: Could you elaborate on kmlfactbook? David Tryse: The idea behind kmlfactbook is to allow anyone to create impressive
visualizations of global data-sets in Google Earth, without the need
to know any programming or have experience with databases. All that
is needed is to upload a simple spreadsheet in CSV format.

Currently kmlfactbook can create 3D prism (or 3D country border
outline) maps, which have started to become a popular way to show data
in Google Earth, as well as more traditional 2D choropleth maps and
pie charts. You can customize colors, icons and a handful of other
options for the output. The visualization can then either be
downloaded as a KML file to view in the Google Earth application, or
be viewed directly online inside kmlfactbook.org using Google Maps or
the new Google Earth browser plugin.

In addition to uploading custom data to create visualizations from the
site is pre-loaded with data from the CIA World Factbook plus the
great collection of environmental data published for free by the nice
people at World Resources Institute EarthTrends. This allows you to
quickly put together a file comparing for example CO2 emissions or
deforestation rates between different countries, in a way that I hope
might be more visually interesting than using a simple table or graph.

At the moment kmlfactbook.org can only work with country level data,
but I aim to add US states and other regional sub-divisions in the
future (as well as more options to customize the visualizations).
My hope is that kmlfactbook will be useful for NGOs and other people
who want to use Google Earth as an interesting new way to highlight
their data. I received a lot of interest about the Disappearing
Forests KML I made last year, and now the site can help anyone make
similar visualizations without needing to spend days in PHP and MySQL.

(03/26/2009) Armed with vivid images from space and remote sensing data, scientists, environmentalists, and armchair conservationists are now tracking threats to the planet and making the information available to anyone with an Internet connection.