New satellite system provides a more detailed look at forest degradation and may help Brazil stop deforestation before it occurs.

Logging and fires damaged nearly 25,000 square kilometers (9,650 square miles) of Amazon rainforest in the August 2007-July 2008 period, an increase of 67 percent over the prior year period, according to a new mapping system developed by Brazil’s National Institute for Space Research (INPE). The damage comes on top of the nearly 12,000 sq km (4,600 sq mi) of rainforest that was cleared during the year.

The increase in activity has been attributed to the sharp rise in commodity prices over the past two years. While grain and meat prices have plunged since last March, higher prices have provided an impetus for converting land for agriculture and pasture. Accordingly, the burning season of 2007 (July-September) saw record numbers of fires in some parts of the Amazon as farmers, speculators, and ranchers set vast areas ablaze to prepare for the 2008 growing season. The high levels of degradation relative to deforestation for 2007-2008 may be an indication that some of the area slated for development was abandoned — before clearing — as commodity prices fell.

Mato Grosso and Pará, states on Brazil’s agricultural frontier, saw the highest levels of deforestation and degradation. Large swathes of forest land and cerrado (tropical savanna) in both states have been converted for large cattle ranches and mechanized soy farms in recent years.

Monitoring deforestation before it occurs

The new system, dubbed DEGRAD, is based on special processing of satellite images provided by LANDSAT and the China-Brazil Earth Resources Satellite (CBERS). DEGRAD may allow Brazil to become the first rainforest nation to accurately track carbon dioxide released during deforestation and forest degradation, the source of roughly two-thirds of Brazil’s greenhouse gas emissions. Such monitoring capacity is critical to REDD, a proposed mechanism for compensating countries for reducing such emissions. Brazil expects to enhance the system when it launches the Amazon-1, an advanced satellite that will use cloud-penetrating technology to allow more detailed monitoring of the Amazon. 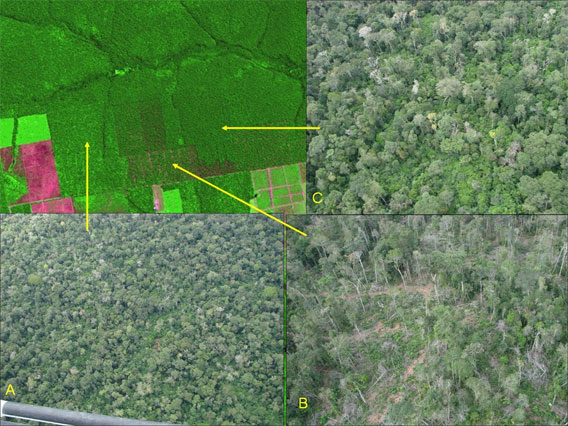 INPE says DEGRAD could help stop deforestation before it occurs by pinpointing areas where forest degradation is occurring. Identifying fronts for deforestation prior to actual clearing will allow authorities to take preventative measures, including determining the legality of the forest activities.

Brazil recently laid out an ambitious plan to reduce Amazon deforestation by 70 percent from a 1996-2005 baseline but it expects industrialized countries to help finance the effort. In August President Luiz Inacio Lula da Silva unveiled a $21 billion donation-based fund to finance conservation and sustainable development projects in the region. Norway has already committed a billion dollars to the initiative provided Brazil meet its targets for stemming forest loss.

Brazil accounts for approximately sixty percent of the Amazon rainforest and the bulk of the region’s deforestation. While less than 20 percent of the vast forest has been cleared, regional climate trends indicate that large swathes of the Amazon are increasingly susceptible to drought and fire. Coupled with continued deforestation, degradation, and fragmentation, some researchers say the Amazon is approaching a critical tipping point which could see more than half of the forest damaged or destroyed within a generation.

Data from DEGRAD is now freely available online at www.obt.inpe.br/degrad 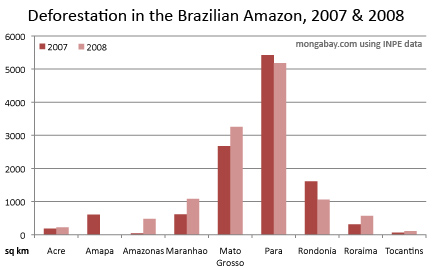 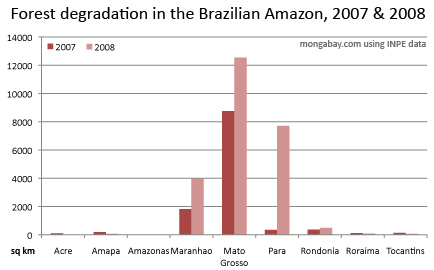 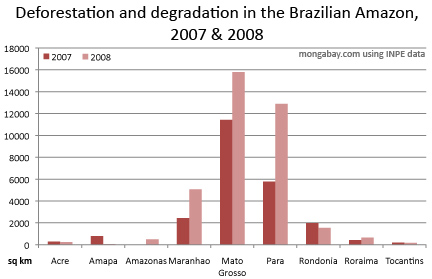 State figures for deforestation and degradation in the Brazilian Amazon.