Finland, Sweden push for loophole that would drive destruction of peatlands around the world


Finland, Sweden push for loophole that would drive destruction of peatlands around the world

Finland, Sweden push for loophole that would drive destruction of peatlands around the world

Finland and Sweden are pushing for a loophole in the E.U.’s Renewable Energy Directive that would open up vast tracts of peatlands around the world to development for biofuels production. The move could have drastic consequences for climate and biodiversity, warns Wetlands International, an environmental group.

During the final stage of negotiations for the Renewable Energy Directive, which sets targets for renewable transport fuels use — including biofuels — in Europe, Finland and Sweden have proposed that only undrained peatlands should qualify for protection from biofuels development. The criterion for the directive currently reads:


“15.4a (new). Biofuels and other bioliquids taken into account for the purposes referred to in paragraph 1 shall not be made from raw material obtained from land that was peatland in January 2008, unless it is proven that the cultivation and harvesting of this raw material does not involve drainage of the soil.”

Finland, supported by Sweden, have proposed inserting “previously undrained” in the text just before the word “soil”. 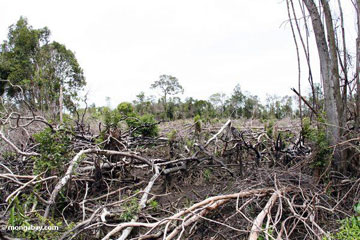 Wetlands contain an amount of carbon comparable to the carbon content of today’s atmosphere. This photo shows destruction of peatland in Kalimantan, Indonesia, on the island of Borneo, for oil palm cultivation.


Wetlands International says that “because 95% of the relevant peatland areas have already been drained to some extent” the proposed change could put vast areas at risk to development. Since peatlands store massive amounts of carbon that is released when they are drained, the legislation could contribute to climate change rather than help mitigate it.

“Peatlands are huge carbon stores,” said Wetlands International in a statement. “The drained peatlands cover less than 0.5% of the global land surface but are responsible for over 11% of global emissions.”

The group notes that draining of peat lands in Indonesia and Malaysia for oil palm plantations leads to the release of millions of tons of carbon dioxide each year. About half of recent oil palm expansion in the two countries has occurred on peatlands. Oil palm is used for the production of palm oil, a source of biodiesel.

Wetlands are estimated to hold 771 gigatons of greenhouse gases, or 10-20 percent of the globe’s terrestrial carbon, despite making up less than six percent of Earth’s land surface. A recent study estimated the economic value of flood prevention and other ecological services provided by wetlands at $15,000 per hectare per year, a sum greater than any other ecosystem — seven times that of the next most valuable, tropical rainforests. This photo shows a peat swamp in Kalimantan.

Sweden and Finland have proposed the change so they can develop their own peatlands for production of biofuel crops.

Wetlands International maintains that peatlands and other wetlands — including river deltas, mangroves, tundra, lagoons and river floodplains — should be protected against development for the environmental services they provide including water filtration and storage, erosion control, a buffer against flooding, nutrient recycling, biodiversity maintenance, and a nursery for fisheries. The group says agricultural expansion should instead be encouraged on degraded and abandoned crop land.

Some 60 percent of global wetlands — including 90 percent of those in Europe — have been destroyed in the past 100 years.