Drought and deforestation in southeast Asia linked to climate change


Drought and deforestation in southeast Asia linked to climate change

Drought and deforestation in southeast Asia to contribute to climate change

Fires linked to drought and deforestation in Borneo, Sumatra, and New Guinea trigger the releaseof 3.3 billion tons of CO2 between 2000-2006

Researchers have linked drought and deforestation in southeast Asia to climate change.

Analyzing six years of climate and fire data from satellites, Guido van der Werf and colleagues report that burning of rainforests and peatlands in Indonesia, Malaysia, and Papua New Guinea released an average of 128 million tons of carbon (470 million tons of carbon dioxide – CO2) per year between 2000 and 2006. Fire emissions showed highly variability during the period, but were greatest in dry years, such as those that occur during El Niño events. Borneo was the largest source of fire emissions during the period, averaging 74 million tons per year, followed by Sumatra, which showed a doubling in emissions between 2000 and 2006. Both islands are experiencing rapid forest destruction due to logging and conversion to industrial oil palm plantations. Forests are usually logged and then burned to establish plantations. Previously analyses have shown a high correlation between the location of fire hot spots and plantations in both Malaysia and Indonesia. 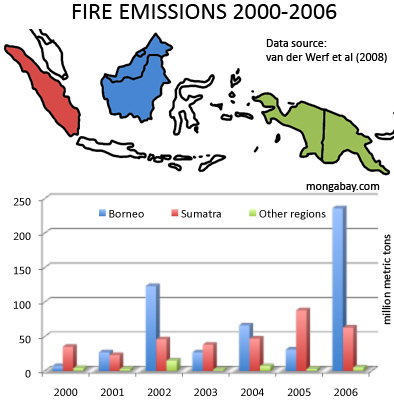 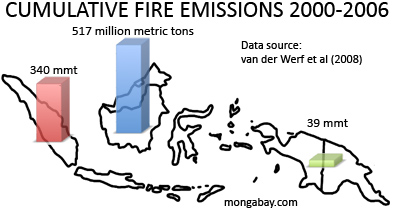 The researchers say their results highlight the importance of including deforestation in future climate agreements.

“Deforestation and carbon emissions are substantial and important contributors to the buildup of greenhouse gases in the atmosphere,” James Randerson, climate scientist at UCI and co-author of the study, said. “We should not neglect this flux in developing comprehensive approaches for stabilizing climate.”

Reducing emissions from deforestation and forest degradation (REDD) is indeed under discussion at current climate talks in Poznan, Poland, although the mechanism is being held up due to technical debates and poor coordination among some parties. Globally deforestation accounts for roughly 20 percent of emissions — greater than all the world’s cars, trucks, planes, and ships combined. In some years, such 1997-1998 which was marked by a particularly strong Niñ;o event; deforestation and emissions from vegetation burning can account for more than one-third of total anthropogenic emissions.

Forest loss exacerbates drying by reducing evapotranspiration by trees. Smoke can also inhibit rainfall while changes in surface reflectivity or albedo can discourage the formation of rain clouds.

Fire as a climate variable

Given the influence of human land management practices on climate, the authors conclude by suggesting that future climate models incorporate anthropogenic use of fire as a carbon–climate feedback mechanism.

“To date, climate–carbon cycle feedbacks have been mostly modeled as an interaction of canopy-level processes such as reduced net primary productivity and increased soil respiration in response to temperature increases,” they write. “Our results provide evidence that the
response of human agents (land users) to drought may comprise an equally important class of carbon–climate feedback mechanisms in the tropics. Without proper mitigation strategies, emissions from this region have the potential to increase substantially as climate projections suggest future drying and warming.