Industrial poultry farming is reducing the genetic diversity of chickens, putting them at greater risk of disease, report researchers writing in Proceedings of the National Academy of Sciences. The authors propose interbreeding commercial chickens with indigenous stocks to restore greater diversity within the industry.

Comparing genetic markers known as single nucleotide polymorphisms (SNPs) in standard bird breeds and those from commercial breeders, William Muir and colleagues found that due to selective breeding practices, which select chickens for certain traits including egg-laying ability or meat production, commercial birds are missing more than half — and sometimes up to 90 percent — of the genetic diversity native to the species. The loss of genetic variability means that chickens are less able to adapt to outbreaks of disease and other risks. 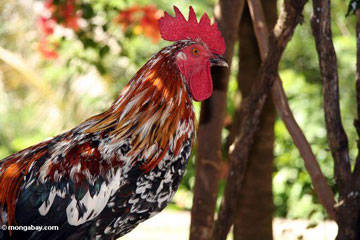 “Just what is missing is hard to determine,” William Muir, an animal sciences professor at Purdue University, said. “But recent concerns over avian flu point to the need to ensure that even rare traits, such as those associated with disease resistance, are not totally missing in commercial flocks.”

“We suggest interbreeding some experimental commercial poultry lines with native or standard breeds as a backup plan, or ace in the hole, to help the industry meet future challenges, as traits such as disease resistance may be found among the rare alleles of other birds.”

A number of rare livestock breeds face extinction, a prospects the weakens genetic diversity and could be the food supply at risk in some parts of the world, warns a new report from the Consultative Group on International Agricultural Research (CGIAR). The group calls for the immediate establishment of genebanks to conserve reproductive material from the most threatened breeds.