Iwokrama, which lies in the heart of Guyana’s rainforest, is known worldwide for its innovative approach to preserving tropical rainforests and creating livelihoods for local communities. Their focus has been to create programs that utilize the forest sustainably, allowing for a mutual benefit between the people and the forest itself. Currently, Iwokrama has a number of initiatives under its umbrella, including eco-tourism, sustainable forestry, on-going research projects, and training programs. Amid these bustling projects, a new one has emerged: butterfly farming.

My wife and I visited Iwokrama in June. During our visit, I was able to sit down with the researchers who are creating the groundwork for the butterfly farm, a project which hopes to provide research opportunities and ecologically sustainable economic gain for the local villages. 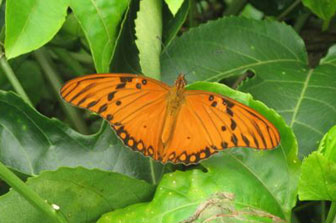 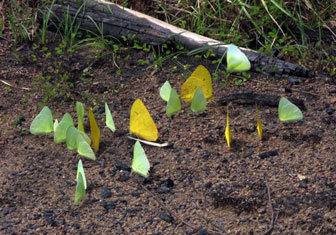 Butterflies feeding on minerals in the soil 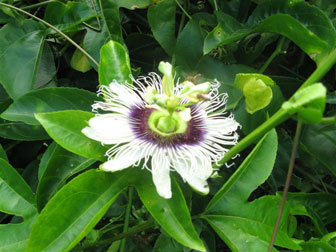 Passion vine flower. Some butterfly species gain their toxicity by feeding on this plant.

Butterfly buyers are on the rise and the business can be surprisingly lucrative. Organizations, such as zoos, museums, and nature centers, purchase butterflies for butterfly houses—where visitors can experience thousands of butterflies in an enclosed space. In addition it has become increasingly popular to release butterflies at weddings, replacing rice and doves with multi-colored lepidopterans. Butterfly buyers are mostly American or European; butterfly farms, for breeding and sales, have popped up globally from Central America to Africa to Papua New Guinea. The team told me that an individual butterfly can fetch anywhere between 1.50 to 3.00 dollars, depending on the species. Since butterflies only live for two to eight weeks, butterfly houses require steady shipments of species year round.

Species are partially chosen for their market value and the ease with which they can be farmed. In addition the team is conducting seasonal butterfly studies. When asked which species was their favorite, they replied: “All of them.”

The group has collected from eight different sites, covering a variety of environments in Iwokrama. Although they have not yet determined the number of species captured, they have caught 6,000 individuals from at least 9 families. The team uses nets to catch the butterflies and baits them with molasses, sugar, fruit and beer. The beer is employed to ferment the fruit, making it more attractive to the butterflies. 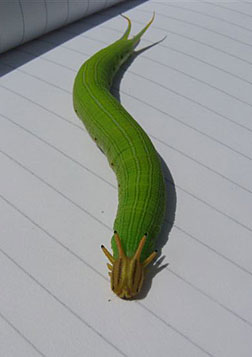 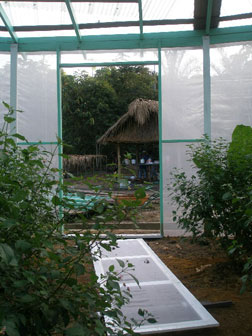 Butterfly house as seen from inside looking out through a door.

Iwokrama’s butterfly farm, which lies on the edge of one of the local village, is an ultraviolet resistant building with a transparent sheet on the roof. Numerous species of plants have been grown to sustain the butterfly population inside.

The first shipment of butterflies is due in August and the employees are working on the best way to ship the pupa overseas, including determining the amount of time each species requires before the pupa becomes a butterfly. Eventually the team hopes to use the farm as a training facility and demo-farm for natives with plans to build more farms in other communities. In addition, the farm will provide another attraction for tourists at Iwokrama.

The butterfly trade is not without controversy. Some conservationists have worried about foreign butterflies establishing themselves in non-native lands with adverse effects, such as competition for local butterflies, spreading of disease, and destruction of local environments. The species shipped to butterfly zoos are of less concern since they should spend their short life in an enclosure without access to the outside. But some butterflies are bound to escape, and butterflies released at weddings are meant to escape. The researchers at Iwokrama said that few studies had been done on the possible negative outcomes of butterfly species.

Sitting on one million acres, the Iwokrama reserve is managed by the seventeen local communities within the reserve called the North Rupununi District Development Board (NRDDB). The butterfly farm is a partner with University of Warwick, England and was provided a 333,629 pound start-up grant from the Darwin Initiative.