Investors will need to spend $45 trillion by 2050 to keep pace with growing energy demand while addressing concerns over global warming, warned the International Energy Agency in a report issued Friday.

“The world faces the daunting combination of surging energy demand, rising greenhouse gas emissions and tightening resources. A global energy technology revolution is both necessary and achievable; but it will be a tough challenge,” Nobuo Tanaka, Executive Director of the International Energy Agency, said in a statement released at the launch of the latest edition of Energy Technology Perspectives (ETP).

The report, issued biennially, says that a business-as-usual approach to meeting energy needs will result in a 130 percent rise in carbon dioxide emissions and a 70 percent increase in oil demand. 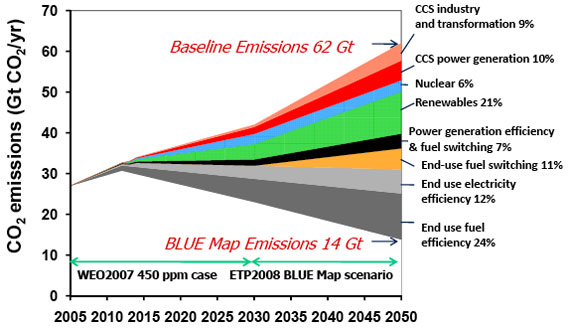 “We are very far from sustainable development, despite the widespread recognition of the long-term problem. In fact, CO2 emissions growth has accelerated considerably in recent years,” Mr. Tanaka said. “Higher oil and gas prices result in a rapid switch to coal. Moreover rapid growth in China and India, both coal-based economies, has also contributed to this deteriorating outlook.”

To avoid this outcome, ETP recommends significant improvements in energy efficiency along with the development of cleaner technologies and carbon capture and storage (CCS) systems. To meet energy needs and goals to decarbonize energy sources by 2050, the agency estimates that each year between 2010 and 2050 an average of 35 coal and 20 gas-fired power plants would have to be fitted with CCS technology — at a cost of USD 1.5 billion each — and 32 nuclear plants and 17,500 wind turbines would need to be built. Further, there would need to be an eightfold reduction of the carbon intensity of the transport sector.

“There should be no doubt – meeting the target of a 50% cut in emissions represents a formidable challenge. We would require immediate policy action and technological transition on an unprecedented scale. It will essentially require a new global energy revolution which would completely transform the way we produce and use energy,” Mr. Tanaka said. “The energy security benefits of such a development, however, would be tremendous. Oil demand by 2050 would be 27% below the level of 2005. Yet massive investments in remaining reserves will be needed to make up for the shortfall as low-reserve provinces are exhausted.”

“We need to act now. We need roadmaps that accelerate international technology development and implementation, but that leave room for flexible responses on a country level,” Mr. Tanaka said. This implies additional funds in the order of USD 100-200 billion per year in the coming decade, rising to USD 1-2 trillion in the coming decades.”