In a bizarre biological twist, a new study shows that the Hyacinth Macaw depends on its greatest predator, the Toco Toucan, for continued survival.

Living in Brazil’s Pantanal the Hyacinth Macaw requires a very specific home: a pre-existing hole in the Manduvi tree. Such trees are in short supply. The tree must be mature (at least 60 years old) in order to provide a hole large enough for the nesting macaws. In addition, seventeen other species of birds will use such holes, as will a variety of mammals and honey bees. Making it even more difficult, the manduvi tree is not highly prevalent: an earlier study found that it made up only 6 percent of the vegetation in the Pantanal. 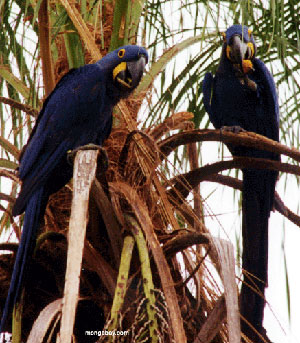 Hyancinth macaws in the Pantanal. Photo by Rhett A. Butler


With the tree so important for Hyacinth Macaws’s survival, the study focused on the species that disperse the seeds. To their surprise scientists discovered that the most effective disperser was the Toco Toucan, collecting 86.3 percent of the seeds. The Toco Toucan tends to keep far away from its relatives and is able to fly long distance, dispersing the seeds further and more-spread out than other species. Manduvi dispersal is therefore very dependent on the efforts of this one toucan species.

Ironically, this is the same toucan which has been shown to be the main predator of Hyacinth Macaw eggs. The macaws lose nearly a quarter of their eggs to predators, including Purplish Jays, White-eared Possums, and Coatis, yet the Toco Toucan eats over half of the eggs lost to prey animals each year. The toucan can swallow such eggs whole, leaving no evidence of its entry; in addition, at times, the toucan will kill macaw nestlings.

The Hyacinth Macaw is listed as endangered by the IUCN. The main driving forces are not predation, but human-related. Illegal trapping and habitat loss are the two largest factors in the macaw’s decline. In the pet-trade the macaw can fetch several thousand US dollars. Cattle ranching, which is prevalent in the Pantanal, is also destructive, since the cattle will eat Manduvi seeds before they have a chance to germinate. Finally, the Hyacinth Macaw’s selectivity regarding nests has not made its long-term conservation any easier.

The scientists who work on the paper urge this new research to be taken into account in future conservation plans, for without its greatest predator the Hyacinth Macaw would have no place to live.