Tiger parts trade must be banned to save great cats

Trade in tiger parts must be banned to save great cats

Tiger parts trade must be banned to save great cats

Trade in tiger products must be banned if tigers are to survive in the wild, reports a study published in Bioscience.

The paper, “The Fate of Wild Tigers,” characterizes the decline in wild tiger population as “catastrophic” and urges governments to outlaw all trade in tiger products from wild and captive-bred sources as well as step up conservation efforts. The report specifically targets China, which is positioning to reopen trade in tiger parts from farmed animals. Among some Chinese, tiger parts are believed to have medicinal values such as addressing impotence.

“A legal market in China for products made from farmed tigers will increase demand and allow criminals to launder’ products made from tigers poached from the wild,” said lead author Eric Dinerstein, chief scientist at World Wildlife Fund. “We’re recommending that tiger range states and other governments with an interest in tiger conservation convene a high-level tiger summit’ to address poaching, trade and habitat protection — urgently.”

“Countries with tigers must let China know that its 1993 ban on tiger trade has been a success in helping slow poaching of wild tigers and that the ban needs to remain in place,” said Josh Ginsberg of the Wildlife Conservation Society and a co-author of the paper.

The paper notes that tigers now occupy just 7 percent of their historical range, and follows India’s finding that tiger populations in the central part of the country are 60 percent lower than previously believed. 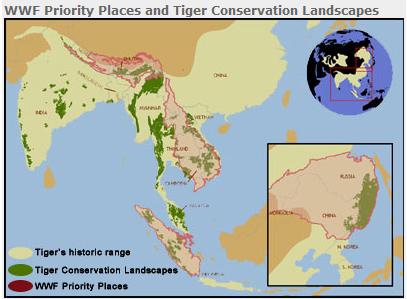 An interview with biologist Luke Hunter:

How to save the world’s big cats

(05/21/2007) Big cats are some of Earth’s largest and most threatened predators. Long persecuted as perceived threats to livestock and humans, hunted for their skins and purported medicinal values, and losing critical habitat to deforestation and conversion for agriculture, big cat populations have dwindled around the world for the past century. Given these trends, it should come as no surprise that big cats have become the focus of conservation efforts. Not only are large predators often the most vulnerable to human pressures and the first to disappear from ecosystems, but efforts to conserve them effectively help protect thousands of other species that share their habitat. At the forefront of these efforts in Dr. Luke Hunter, a biologist with the Wildlife Conservation Society (WCS) where he heads their Great Cats Program. In a May 2007 interview with mongabay.com, Hunter discussed strategies for conserving carnivores and offered insight for students interested in pursuing careers in conservation science.

This article is based on a news release from WWF.