Dr. Cecep Kusmana, a professor at the Bogor Institute of Technology, told ANTARA News that forestry ministry data shows about 6.7 million of Indonesia’s 9.4 million hectares of mangrove forest are damaged, including 2.2 million of which are “seriously degraded.” The figures do not include mangrove forest that has been cleared or converted for agriculture.

“The damages of the country mangrove forest areas were mainly due to human encroachment such as for settlement, ponds, and plantation,” Kusmana was quoted as saying. “Despite the vast damages, Indonesia relatively has better mangrove forest areas than other countries in the region, because Indonesia still has intact mangrove areas in on Papua and Kalimantan Islands.”

Still environmental group WWF estimates that around 80 percent of mangroves on the island of Borneo have been cleared by loggers and for agriculture. About 1.2 million hectares remain on the island, the majority of which occur in Kalimantan, the Indonesia-controlled part of Borneo island.

Kusmana said mangroves play an important ecological role in Indonesia, serving as a refuge for wildlife and protecting against coastal erosion. He advocated conservation and rehabilitation of mangrove forests. 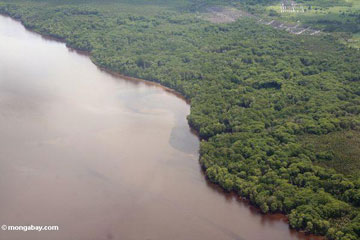 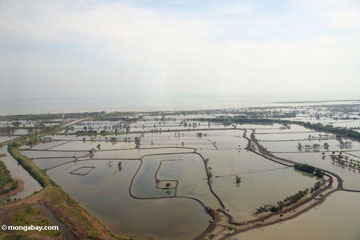 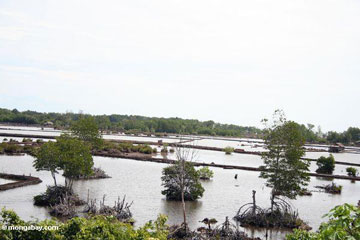 
Photos by Rhett A. Butler