PetroChina, Asia’s largest oil and gas producer, announced the discovery of a 7.5 billion barrel oil field off the northeast coast of China. The find, in an undersea field in Bohai Bay, is the largest in Asia in four decades and will boost China’s known oil reserves by 20 percent. Nevertheless, the discovery will not be enough to offset China’s oil imports, which have surged in recent years due to a booming economy and rapid adoption of automobiles.

Analysts say that once production begins, the oil field will likely pump out 180,000 to 200,000 barrels per day, or an amount about equal to the growth of China’s foreign oil imports last year.

China’s demand for oil, which is projected to reach 12.8 million barrels/day by 2025, is commonly cited as a major contributing factor to the recent run up in global oil prices. Economists have found a close correlation between Chinese demand for oil and crude prices in recent years.

China’s growing use of oil will increase its carbon dioxide emissions — the International Energy Agency expects China to overtake the United States in CO2 emissions this year or in 2008. The country lobbied against lower emissions targets in recent climate negotiations, arguing that such limitations would restrict its economic growth. 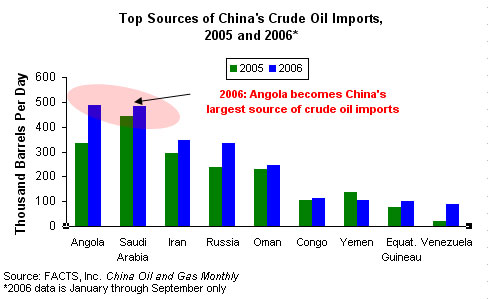 Above image and the following table are courtesy of the U.S. Energy Information Adminsitration (EIA)