A sudden surge in sea levels could put more than a billion people at risk reports new research presented by scientists from the U.S. Geological Survey (USGS).

New mapping technique show how much land would be inundated by various increases in sea levels. The researchers caution that the scenarios are likely to result from storm surges and earthquake-produced tsunami, not gradual rises in sea level caused by global warming-induced melting sea ice and glaciers.

The researchers, led by E. Lynn Usery, note that the largest surge during the 2004 Aceh tsunami, which killed 230,000 people around the Indian Ocean, reached 100 feet.

Sea levels are currently rising at 0.04 to 0.08 inches (1 to 2 millimeters) each year due to melting ice caps and thermal expansion of sea water. 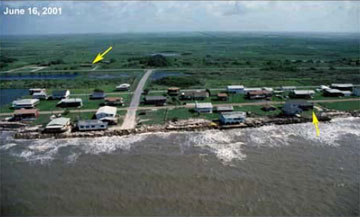 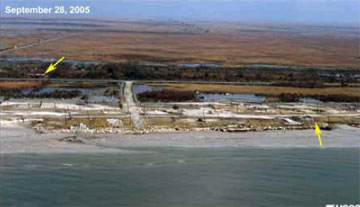 Peveto Beach, Louisiana, before and after Hurricane Katrina.
Image courtesy of USGS.

– this note used information from a USGS. presentation and a Reuters report by Michael Kahn.