China says it will spend more than $2.1 billion (16.5 billion yuan) to protect and restore its highly endangered wetlands over the next five years.

“The problems that plague wetlands in the Yangtze River Valley include pollution, ecological degradation and dwindling water resources,” said Zhu. “The protection of our wetlands is urgent.” 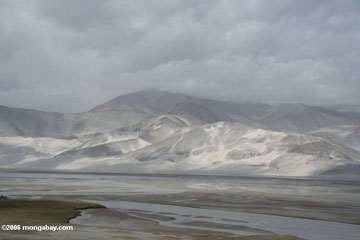 Zhu cited Dongting Lake, which has shrunk from 4,350 sq km in 1949 to 2,625 sq km today as a result of siltation and land reclamation for farming. He said that the lake is “shockingly polluted” and infested with snails that carry schistosomiasis, a debilitating disease when left untreated.

The news comes shortly after environmental groups announced the extinction of the Baiji, the Yangtze’s famous river dolphin; though Chinese officials have been unwilling to concede the species’ disappearance.

China makes environmental moves as problems mount. China, the world’s most populous country and fastest growing economy, faces a host of environmental problems. Energy and water shortages, water and air pollution, cropland and biodiversity losses, and escalating emissions of greenhouses gases are all concerns as the country moves towards world superpower status. While these issues could threaten to destablilize the country and derail economic growth, it appears that it is taking steps to address some of these challenges.