The maps show for the first time the impact of deforestation and agricultural expansion on the Amazon rainforest, according to the agency.

“The maps constitute an important tool for measuring the impact of these activities, notably cattle ranching and soybean farming,” said IBGE in a statement.

The maps reveal that Rondônia state, at 28.5 percent, has the highest percentage of forest loss of any state in the legal Amazon. IBGE says that until 1978, Rondônia had lost only 1.76 percent of its forest cover. In absolute terms, the state of Pará had the highest amount of forest loss at 207,000 square kilometers, mostly along the Trans-Amazon highway and the BR-163 road that connects the region with Mato Grosso and southern Brazil. Amapá has the lowest rate of forest loss — about 0.5 percent of its territory had been cleared.

The agency cites population growth resulting from government migration programs, development of the logging industry, agricultural fires, and infrastructure development as the main drivers of deforestation. It says that agricultural expansion is occurring mostly in Tocantins, Maranhao and in some parts of Amazonas, Roraima and Rondonia states and that pig iron and illegal mining are threats to Altamira National Forest in western Pará.

The maps also incorporate “sociocultural diversity”, showing population distribution and the boundaries of indigenous reserves that have been established across more than a quarter of the 3.8 million square kilometer region. IBGE says that migrants now make up more than half the population in cities that lie near the major roads in the Amazon: “BR-364 (Rondônia and the northwest of Mato Grosso), BR-163 (north of Mato Grosso and southwest of Pará), PA-150 (Southeastern of Pará), MT-158 (east of Mato Grosso) and BR-174 (Roraima)” and that Manaus has the largest population of migrants. Many of the migrants arrived in the 1970s and 1980s under Brazilian government programs that encouraged colonization of the Amazon by poor farmers. 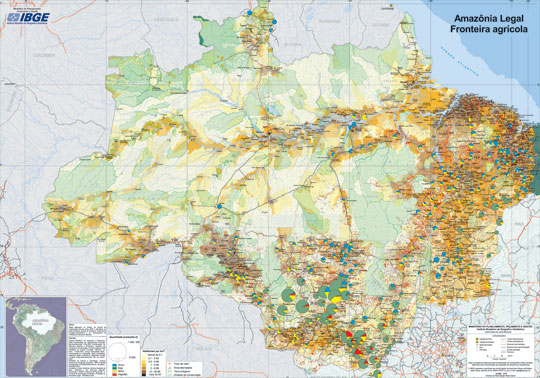 Update: Bloomberg (“Brazil Amazon Lost 13% of Virgin Forest in 2000-2003” by Adriana Brasileiro) says the Brazilian Amazon lost “13.3 percent of its virgin forest from 2000 to 2003” or 665,945 square kilometers of primary forest, an area equivalent to the size of Italy and Germany together. I believe Bloomberg has made an error. 665,945 square kilometers probably refers to the total amount of primary forest loss in the Brazilian Amazon.

Brazil creates world’s largest rainforest reserve. Brazil created the world’s largest expanse of protected tropical rainforest in Para, the state where American nun Dorothy Stang was murdered after trying to protect land rights of rural poor. The network of seven new protected areas covers an expanse of 15 million hectares (57,915 square miles) — or an area larger than England — and links to existing reserves to form a vast conservation corridor in the northern Amazon, one of the most biodiverse regions on the planet.

Amazon deforestation rate plunges 41 percent. Today the Brazilian government announced a sharp drop in Amazon deforestation. Forest loss for the 2005-2006 year was 13,100 square kilometers (5,057 square miles) of rainforest, down more than 40 percent from last year. The figure is the lowest since 1991 when 11,130 square kilometers (4,258 square miles) of forest were lost. Deforestation peaked in 1995 when 29,059 square kilometers (11,219 square miles) of forest were cut. Deforestation has plunged by almost 50 percent since 2004. Falling commodity prices, increased enforcement efforts, and government conservation initiatives are credited for the drop. “We aggressively increased enforcement of environmental laws in the past years and it has worked,” Joao Paulo Capobianco, Brazil’s minister-secretary of biodiversity and forests, told the Associated Press.

Amazon Indians use Google Earth, GPS to protect forest home. Deep in the most remote jungles of South America, Amazon Indians are using Google Earth, Global Positioning System (GPS) mapping, and other technologies to protect their fast-dwindling home. Tribes in Suriname, Brazil, and Colombia are combining their traditional knowledge of the rainforest with Western technology to conserve forests and maintain ties to their history and cultural traditions, which include profound knowledge of the forest ecosystem and medicinal plants. Helping them is the Amazon Conservation Team (ACT), a nonprofit organization working with indigenous people to conserve biodiversity, health, and culture in South American rainforests.

Fragmentation killing species in the Amazon rainforest. Forest fragmentation is rapidly eroding biodiversity in the Amazon rainforest and could worsen global warming according to research to be published this week in the journal Proceedings of the National Academy of Sciences. “Rainforest trees can live for centuries, even millennia, so none of us expected things to change too fast. But in just two decades-a wink of time for a thousand year-old tree-the ecosystem has been seriously degraded.” said Dr. William Laurance, a scientist at the Smithsonian Tropical Research Institute in Panama and leader of the international team of scientists that conducted the research.

A better way to cut down the Amazon rainforest?. A new study suggests that deforestation that follows a “fishbone” pattern may be less damaging from an environmental standpoint than traditional clear-cutting. The reason? Fishbone deforestation patterns may create conditions that increase precipitation levels which help cleared vegetation recover quicker. The research, which will be presented this week by Somnath Baidya Roy, a professor of atmospheric sciences at University of Illinois at Urbana-Champaign, at the annual American Geophysical Union meeting in San Francisco, is based on analysis of deforestation in Rondonia, a state in Brazil where the “establishment of rural development projects has resulted in the construction of orthogonal road networks.” Deforestation, which typically follows road and highway construction, has progressed in a fishbone pattern.

This article used information from a IBGE news release.