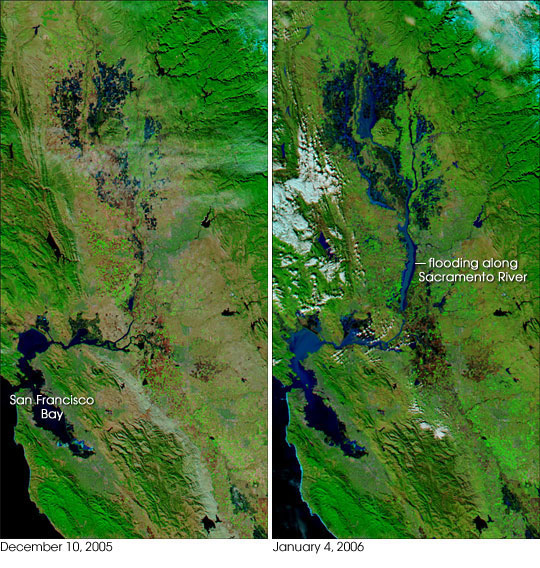 Northern California ushered in 2006 with a series of major storms that inundated the area and left many towns awash in water, mud, and debris. According to a report from the USATODAY.com Website, at least two levees in the Sacramento-San Joaquin Delta region were unable to handle the rising waters and strong winds, and residents nearby evacuated as the water-control structures began leaking. In the wine-country town of Napa

perhaps as many as 1,000 homes were flooded along with thousands of acres of rural and agricultural land. The governor declared several counties in the region flood disaster areas.

This pair of images shows flooding in the Sacramento-San Joaquin Valley region inland of San Francisco Bay. The image on the left was captured by the Moderate Resolution Imaging Spectroradiometer (MODIS) on NASA’s Aqua satellite on December 10, 2005, while the image at right was captured on January 4, 2006, just days after the severe storms passed through. Dark blue pools of water swamp far larger areas of ground in January than they did in December. The Sacramento River is very wide and turbid; the sediment in the water is reflective and gives the river its lighter blue appearance. The northern reaches of San Francisco Bay are also bright with sediment, which may be a mixture of river run-off and churning of the Bay by storm winds. Vegetation is bright green, snow in the Sierra Nevada Mountains is bright blue (upper right), and bare or sparsely vegetated ground appears pinkish or reddish tan.

The rain-producing storms that passed through the state became blizzards as they crossed the mountains. A wider-area image produced by the MODIS Rapid Response Team shows snow cover on the Sierra Nevada Mountains and across the Great Basin.

This is a modified news release from Earth Observatory & Natural Hazards. The purpose of NASA’s Earth Observatory is to provide a freely-accessible publication on the Internet where the public can obtain new satellite imagery and scientific information about our home planet. The focus is on Earth’s climate and environmental change.