Global warming will cause sea levels to rise up to 34 centimeters (11 inches) by the end of the century, causing increased flooding, worsening the impact of storms, damaging low-lying ecosystems, and accelerating coastal erosion, according to a new study by Australian researchers.

The study — published in this month’s issue of the journal Geophysical Research Letters — said climate change was expected warm oceans and cause glaciers in the Himalayas to retreat and ice sheets in Greenland to melt.

“What we found is that sea levels are rising and increasing with time,” said John Church, a co-author of the study by the Commonwealth Scientific and Industrial Research Organization (CSIRO), a research arm of the Australian government.

The study supports research published last October by scientists at the Max Planck Institute for Meteorology in Hamburg, Germany who calculated that sea levels could rise on average by as many as 30 centimeters based on a four degree rise in global temperatures by 2100. Another study published in late November 2005 using core samples of sediments along the New Jersey coast found that rates of sea level change have doubled in the past 150 years, coinciding with the beginning of the industrial revolution when carbon dioxide emissions began to dramatically increase. Carbon dioxide is the principal greenhouse gas believed to contribute to global warming. 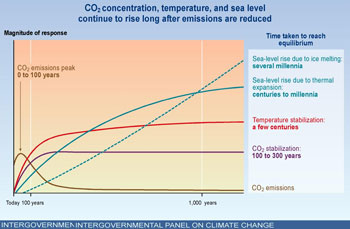 
The new CSIRO-led research looked at historical tidal data, instead of climate change models and projections. The team found that sea levels rose by 19.5 centimeters (7.7 inches) between 1870 and 2004, with annual increases accelerated with time, averaging 1.7 millimeters (0.07 inches) a year in the 20th century and 1.8 millimeters in the past 50 years.

Rising levels are of great concern territories with low-lying areas, especially nations in the South Pacific and Indian Ocean. Last month, a small community living in the Pacific island chain of Vanuatu became the first to be formally evacuated as a result of climate change. The UN-backed relocation project involved over 100 villagers, but more permanent evacuations in other areas are expected over the next few years. The low-lying Pacific island state of Tuvalu has struck an agreement with New Zealand to accept its 11,600 citizens in the event rising sea levels inundate the country. By one rough estimate provided by the UN, as many as 100 million people worldwide live in areas below sea level and are subject to storm surge.

While containing greenhouse gas emissions could help stem increases, Church added that sea levels would rise nonetheless due to the capacity of oceans to store heat.

“We do have to reduce our emissions but we also have to recognize climate change is happening, and we have to adapt as well,” Church said.

Global ocean levels are rising twice as fast today as they were 150 years ago according to research presented in Science by a team of researchers. Using core samples of sediments along the New Jersey coast, the scientists found that rates of sea level change have climbed significantly over the past 200 years, coinciding with the beginning of the industrial revolution when carbon dioxide emissions began to dramatically increase. Carbon dioxide is the principal greenhouse gas believed to contribute to global warming

According to the calculations of scientists at the Max Planck Institute for Meteorology in Hamburg, over the next century the climate will change more quickly than it ever has in the recent history of the earth. These results come from the latest climate model calculations from the German High Performance Computing Centre for Climate and Earth System Research

Rising seas, disappearing islands to cause environmental refugees in a warming world

The Carteret Islands are almost invisible on a map of the South Pacific, but the horseshoe scattering of atolls is on the front-line of climate change, as rising sea levels and storm surges eat away at their existence. For 20 years, the 2,000 islanders have fought a losing battle against the ocean, building sea walls and trying to plant mangroves. Each year, the waves surge in, destroying vegetable gardens, washing away homes and poisoning freshwater supplies.

A small community living in the Pacfic island chain of Vanuatu has become one of, if not the first, to be formally moved out of harms way as a result of climate change. The villagers have been relocated higher into the interior of Tegua, one of the chains’ northern most provinces, after their coastal homes were repeatedly swamped by storm surges and aggressive waves linked with climate change.

Carbon dioxide levels are now 27 percent higher than at any point in the last 650,000 years, according to research into Antarctic ice cores published on Thursday in Science.

Amid predictions that by 2010 the world will need to cope with as many as 50 million people escaping the effects of creeping environmental deterioration, United Nations University experts say the international community urgently needs to define, recognize and extend support to this new category of refugee’.

This article is based on a news releases from CSIRO, the UN, the Max Planck Institute, and Rutgers.