Global warming to cause rise in asthma, malaria

NEW YORK-November 1, 2005-The Center for
Health and the Global Environment at Harvard
Medical School, along with co-sponsors Swiss Re
and the United Nations Development Programme,
today released a study showing that climate
change will significantly affect the health of
humans and ecosystems and these impacts will have
economic consequences.

The study,
Climate Change Futures: Health, Ecological and
Economic Dimensions (CCF) [PDF], surveys existing and future
costs associated with climate change and the
growing potential for abrupt, widespread impacts.
The study reports that the insurance industry
will be at the center of this issue, absorbing
risk and helping society and business to adapt
and reduce new risks.

“We found that impacts of climate change are
likely to lead to ramifications that overlap in
several areas including our health, our economy
and the natural systems on which we depend,” said
Paul Epstein, the study’s lead author and
Associate Director of the Center for Health and
the Global Environment at Harvard Medical School.

“A comparable event would be the aftermath of
flooding, contamination and homelessness
witnessed after Hurricane Katrina hit the US Gulf
coast in August,” he said. “Analysis of the potential ripple
effects stemming from an unstable climate shows
the need for more sustainable practices to
safeguard and insure a healthy future.” 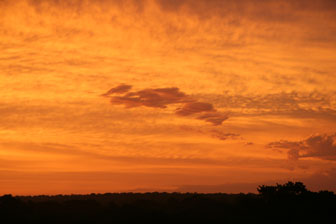 “As a reinsurance company, our goal is to
evaluate and plan for the long-term,” said
Jacques Dubois, Chairman of Swiss Re America
Holding Corporation. The parent company, Swiss
Re, is a leading global reinsurance company and a
co-sponsor of the study. Dubois continued, “Swiss
Re has an ongoing effort to focus on potential
economic impacts of climate change. This study
adds to this by helping to review areas of
increased vulnerability to climate change from a
unique perspective. Whereas most discussions on
climate change impacts hone in on the natural
sciences, with little to no mention of potential
economic consequences, this report provides a
crucial look at physical and economic aspects of
climate change. It also assesses current risks
and potential business opportunities that can
help minimize future risks.”

There are 10 case studies within the report,
written by scientific experts, that outline
current effects of climate change with regard to
infectious diseases such as malaria, West Nile
virus, Lyme disease and asthma; extreme weather
events such as heat waves and floods; and
ecosystems such as forests, agriculture, marine
habitat and water. Economic implications as well
as possible near-future impacts are projected for
each case.

The study shows that warming and extreme weather
affect the breeding and range of disease vectors
such as mosquitoes responsible for malaria, which
currently kills 3,000 African children a day, and
West Nile virus, which costs the US $500 million
in 1999.

Lyme disease, the most widespread
vector-borne disease, is currently increasing in
North America as winters warm and ticks
proliferate. The study notes that the area
suitable for tick habitat will increase by 213%
by the 2080s. The report also finds that ragweed
pollen growth, stimulated by increasing levels of
carbon dioxide, may be contributing to the rising
incidence of asthma.

Charles McNeill, Environment Programme Manager
for the United Nations Development Programme, a
co-sponsor of the study, pointed out that these
costs will fall disproportionately on developing
nations.

“While developed nations are not immune
to the impacts of climate change, those
populations that are already struggling with
myriad social challenges will bear the greatest
brunt of climate change,” said Dr. McNeill.

The CCF project stemmed from a common concern of
the Center for Health and the Global Environment
at Harvard Medical School, Swiss Re and the
United Nations Development Programme. This
concern was centered on the emerging threats to
health from climate change and the implications
of diseases of humans and Earth’s life-support
systems for economies and development.

Unique aspects of the study include:

In September 2003, a Scoping Conference for the
CCF project was held at the United Nations in New
York and involved more than 80 participants from
multiple scientific disciplines, corporations, UN
agencies and non-governmental organizations.
Through the initial deliberations, follow-up
workshops and teleconferences, a set of case
studies and impact scenarios was developed.

In June 2004, a conference and Executive
Roundtable were held at Swiss Re’s Centre for
Global Dialogue at Rschlikon near Zurich,
Switzerland. This gathering expanded the reach of
the project to include more representatives from
the financial sector, allowing deeper exploration
of the links between health, environmental and
economic consequences of the changing climate.
Risks and opportunities were addressed, as were
policies and measures commensurate with the
magnitude of the possible futures envisioned.

In August 2004, a follow-up workshop was
facilitated to standardize the methodology for
the case studies and scenarios. The resulting
study was released today at the American Museum
of Natural History.

About the study sponsors

The Center for Health and the Global Environment, Harvard Medical School

This is a modified new release from Harvard Medical School. The original version can be found at Study Shows Escalating Climate Change Impacts on Human Health, the Environment, and the Economy.